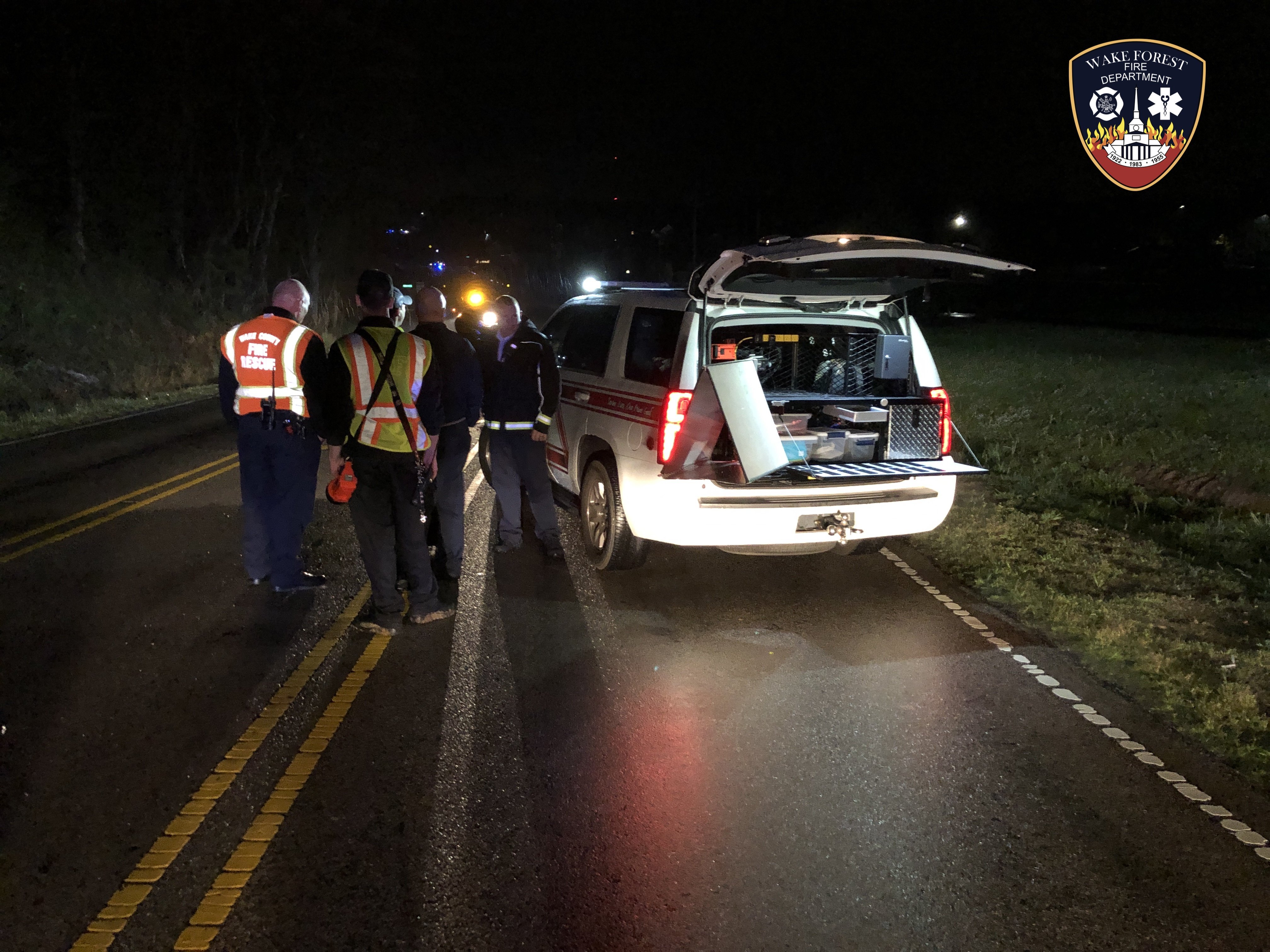 To assist in determining the location and extent of the root cause of the water overflowing the retention wall of Marshall Pond on Forestville Rd.

On the evening of April 5th a passing motorist noticed water running over the retention pond wall along Forestville Rd.

I established a landing zone (LZ) in the middle of Forestville Road at the area marked with LZ in the image below. The middle of the closed road was the safest location with no wires or obstructions above. The command post (CP) was located approximately 50 feet further down the road towards the bridge. You can see the CP in the image below. 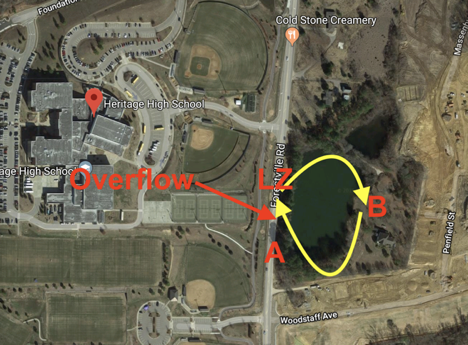 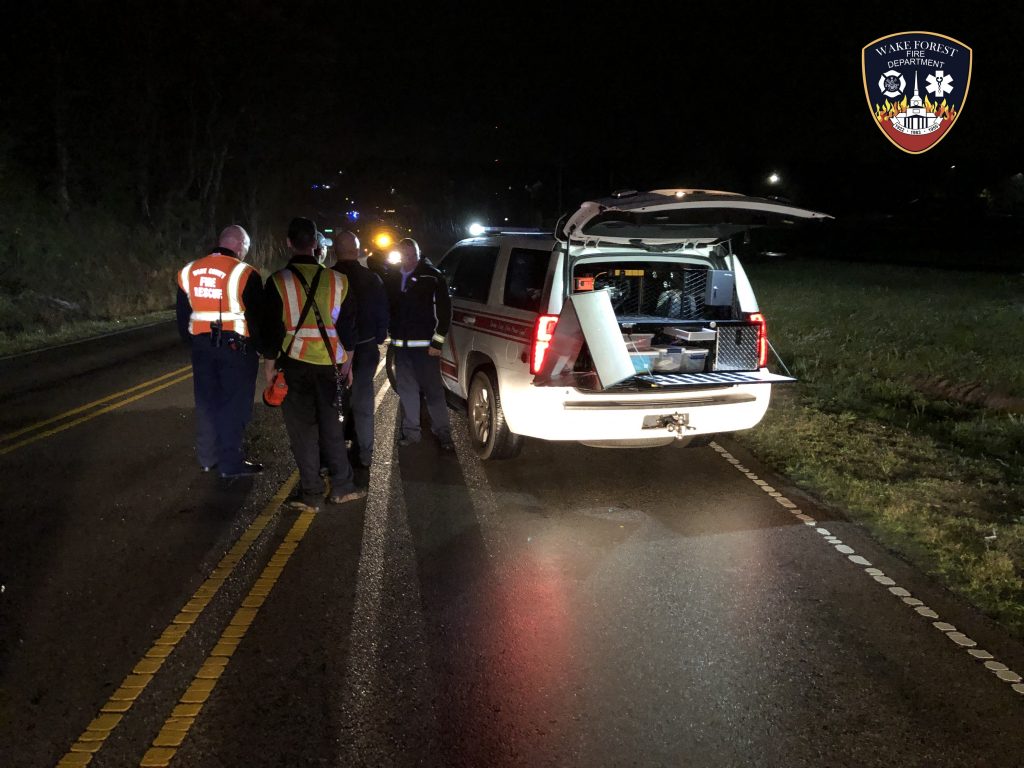 The weather was not conducive to visual inspection from the air. It was a dark, overcast, and rainy evening. I arrived on scene at approximately 2030. The rain was irregular and harder at sometimes than others.

However, the rain was not of sufficient intensity, in my opinion as PIC, to prevent the launching of Firebird 1 to survey the area as requisition by the Incident Commander (IC) and CP.

There were no people that I would fly over from the LZ, up and over the hill-retention pond wall nor on the pond itself.

I concluded flight was safe to conduct and began an inspection of the pond.

The first effort was to utilize the Zenmuse X4S visual camera and attempt to get a visual view by manipulating the camera controls. However, the weather and severe darkness prevented any image at all.

You can see the weather conditions in the image below I captured at the CP. 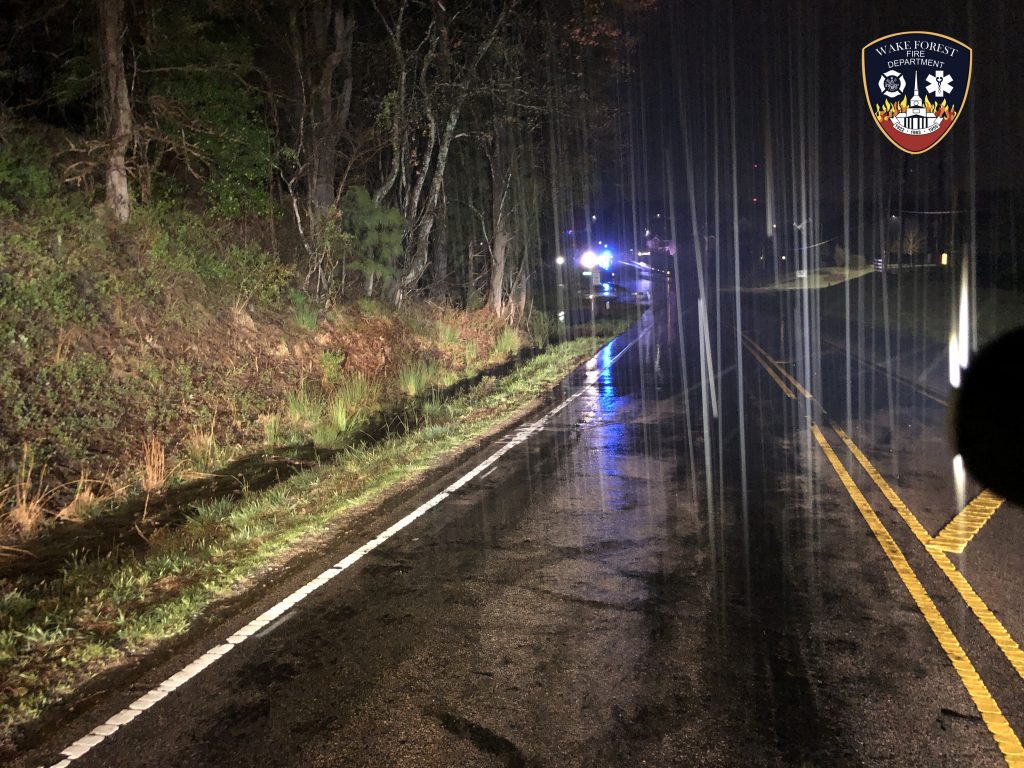 Even with placing a light at the top of the pond dam wall the lighting was insufficient to visually inspect the pond.

The next effort was to utilize the onboard FLIR XT camera and attempt to detect a thermal energy difference of the ground below to attempt to visualize the leaking relying on the difference created by thermal emissivity since water and soil have different emissive properties. This effort was successful and allowed me to visualize areas where water had been running over the retention pond wall.

However, I was unable to determine the difference between the active leak and the path of water that had been flowing previously. The ground thermal signature was still influenced by the previous flow. 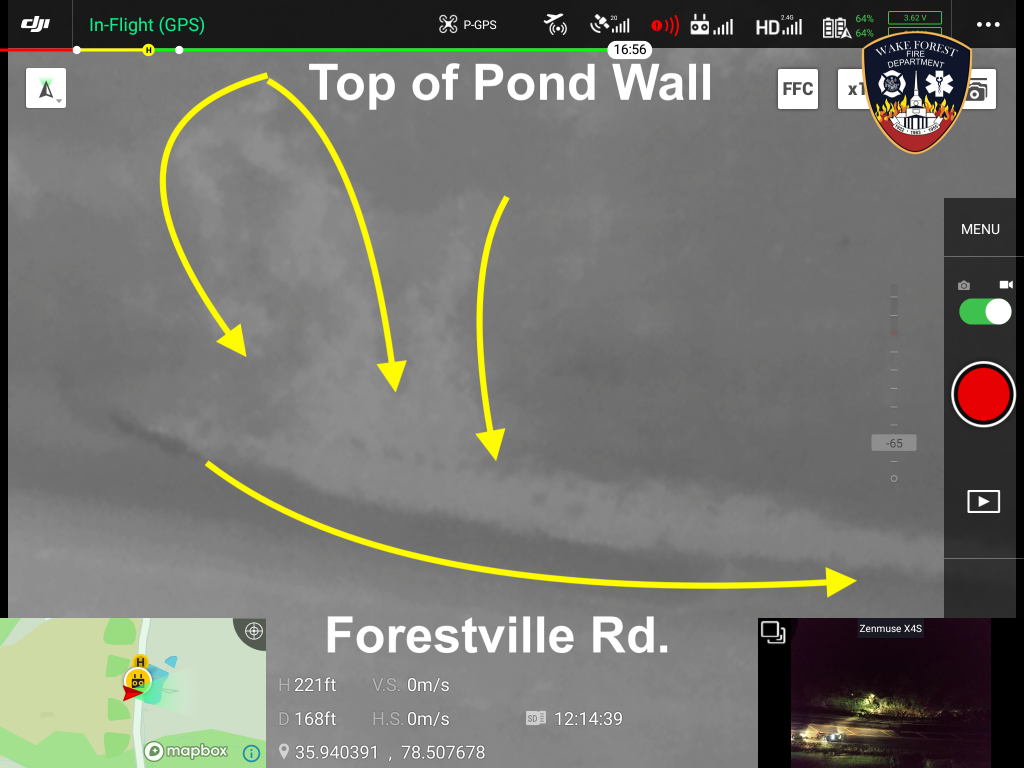 I initially caught sight of the thermal signature using a white hot thermal setting but after testing some additional palettes I discovered that the rainbow HC gave me the best visualization. You can see the initial view of what appeared like water flow in the areas of the yellow arrows above.

You can best see this in the image below.

The lighter blue parts of the image were warmer. This included the pond water, leak, and road. 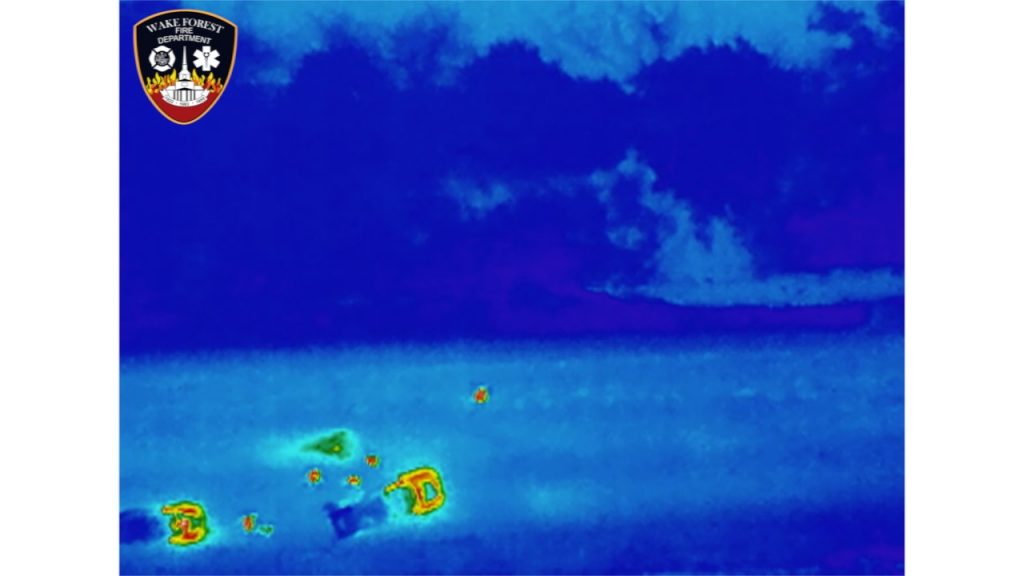 The focal point of the water flow appeared to be from one specific spot on the top of the retention pond wall.

I was able to later walk up on the pond wall and visually compare what I observed with the thermal camera and the actual conditions. The point of the flow identified on the visual image was a low spot in the pond wall that exhibited evidence of historical spillage in that exact same area. There was evidence of previous erosion, small gully, in that spot with vegetation and a tree growing in that area for an extended period of time.

On the opposite side of the pond there appeared to be some similar water flow patterns in a specific spot. However, firefighters who physically examined the entirety of the pond perimeter were unable to see any active water flow or retention. It may have overflowed earlier.

The use of the thermal camera to measure the dam leakage was extremely helpful but cannot be solely relied upon to positively identify an active water flow at that moment.

It did give us the ability to give additional attention to the areas that raised interest with the thermal camera.

Actionable information was passed on to the CP, IC, and on-scene DOT representative.

It was determined the leak was focalized, was not eroding the pond wall, and would not pose a risk that would require the evacuation of nearby residents.

It was determined that the probable source of the underlying issue was an effort earlier in the day to drain a smaller upstream pond into the larger pond that had the leak.

The area of the leak was the lowest point in the retention pond wall and the rapid insertion of water from the smaller to larger pond had most likely caused the larger pond to overflow.

The only item I wish was better would have been some better form of illumination to conduct a visual inspection. However, any lights mounted on the UAS would have been less helpful due to the intensity of the rain falling and the reflection of light off that rain.

The only suggestion I have would be it would have beneficial to set this up like a SAR mission flight and assign an operations liaison and have a dedicated ground team to examine UAS identified targets. However, the lack of that configuration on this mission flight did not detract from the end results.