Let’s take a look at a few examples of what can go wrong, knowingly or not.

The first involves Cecil the Lion, the infamous animal who was killed by a big game hunter from Minnesota that sparked an international uproar.

Mical Caterina, also from Minnesota, decided to record and photograph an event of a gathering of people, who formed a human lion, to honor Cecil.

The event (and photograph) was ultimately shared on YouTube. 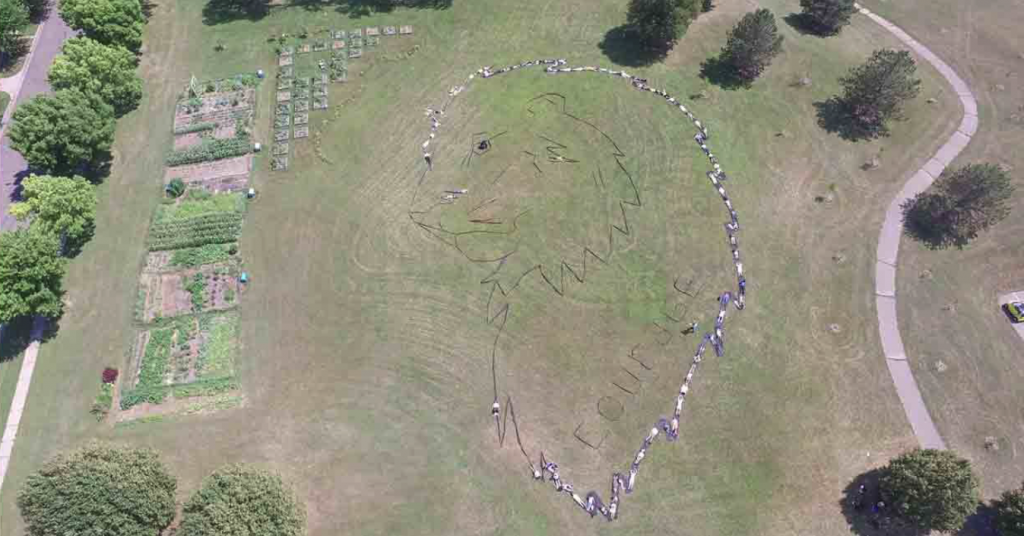 Previously, Mical had contacted the local FSDO (Flight Standards District Office) to discuss the upcoming flight but never heard back from them; an experience I can personally attest to.

For nearly six months, Caterina didn’t hear a thing from the FSDO office. Then, on Feb. 5, he received a subpoena from the FAA requesting all aerial photography and videography uploaded to his personal website, as well as all photos and videos uploaded to social media, including Facebook, YouTube and information about his drone. He complied on March 1.

After a month and a half of hearing nada, the FAA subsequently levied $55,000 in fines against him for violating five aviation regulations, all of which he disputes. The accusations and violations included operating an aircraft in a careless or reckless manner, piloting a flight not being operated for hobby or recreational purposes, failing to register his drone with the FAA, flying without an airworthiness certificate, flying within 5 miles of an airport and flying within 100 feet of a helicopter that was taping the event for a local news channel. No representative from the FAA was present at the event.

Even more perplexing is that the DJI Inspire 1 he flew was under the geofencing feature, which makes it virtually impossible to fly within the 5 nautical mile “fence” of an airport.

“The FAA is jumping into this drone policy situation without a clear central plan for how these rules are going to be enforced, how they’re going to be defined, and what kind of activities are the sort that ought to rise to the level of an enforcement action,” quotes Jason Snead, a policy analyst at The Heritage Foundation who has written extensively on the FAA and drone policy.

SkyPan International of Chicago, IL, is another interesting case. SkyPan advertises itself as an aerial imaging company that can capture a bird’s-eye view of dense, urban environments for developers and architects planning new projects.

The FAA proposed a $1.9 million fine against SkyPan for conducting 65 illegal drone flights in congested airspace over Chicago and New York City. The illegal flights were conducted between 2012 and 2014, and the FAA alleged in October that the company was operating drones without proper FAA clearance in some of the country’s most congested airspace. SkyPan was further accused of operating its aircraft without proper communication tools and without receiving an airworthiness certificate and registration.

The FAA ultimately agreed on a $200,000 fine for SkyPan but the agency also announced an additional $150,000 fine if SkyPan violates FAA rules again in the next year and another $150,000 fine if the company fails to comply with the settlement agreement. That’s a total potential bill of $.5M. SkyPan is also required to work with the FAA to release three public service announcements to
promote FAA rules. Rules? In exchange for the fine, the FAA will make no finding of violation.

The irony is that SkyPan’s flights were conducted before the FAA issued its commercial drone operator rules in August 2016, prior to which special FAA clearance was required for commercial drone flights. The FAA was expected to release its proposal for rules that would clarify how drones are allowed to fly over populated areas in December 2016, but that didn’t happen.

As a side note, FAA Administrator Michael Huerta said in 2016, that airplane pilots reported 1,800 drone sightings, up from 1,200 drone sightings in 2015. This may have contributed to the angst the FAA is feeling, thus the somewhat kneejerk reactions we are seeing.

Mr. Steve Rhode has been writing about additional UAS oversight from the FAA. Some of his highlights are:

I made a call to my FSDO contact and was told that yes, the FAA does plan on more active onsite visits.

4 thoughts on “Can Public Safety UAS Pilots be Held Personally Liable? More Than We May Know. Part 3”