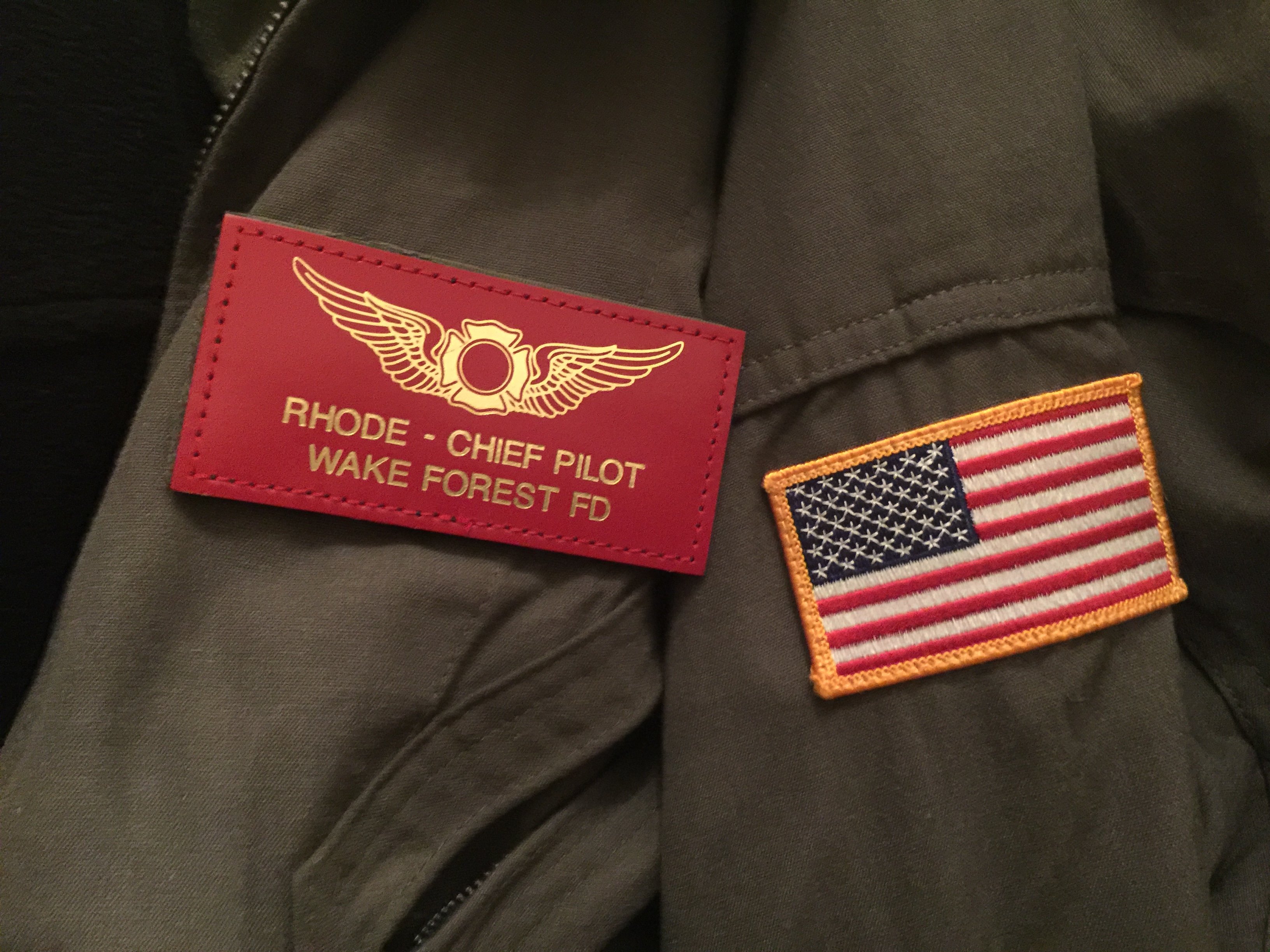 It is for me to clearly state that my results should not be interpreted as being applicable to all users of DJI TB batteries or users of this version of the software. I can only describe the results I observed for the specific Matrice 210 aircraft we fly.

Your judgment and risk assessment should always determine your personal or department flight opinion. The pilot-in-command is always the sole and final authority liable for aircraft operations.

After reading the results below, you will find a contact box if you wish to reach me for more information.

On January 1, 2019, I conducted a firmware update and flight test to determine if the software fix DJI had put in place would allow us to return our aircraft, Firebird 1, to service.

Software issues allegedly created by battery firmware incompatibility had led to aircraft falling out of the sky and battery sets reporting as failed and unable to fly. We had two such battery sets in our extended TB55 battery sets.

I waited till the end of the year to install and test the firmware to allow DJI to finish alleged fixes and updates.

The firmware installation process was normal and without incident. All batteries were updated before the flight.

On a positive note, the firmware update returned all batteries to service and previously rejected batteries were now fully recognized.

The test flight uncovered an easy to miss and very concerning problem. For some unexplained reason, the aircraft can maintain its position in the air with precision as it always has but cannot reflect its location with accuracy on the controller. If this was an onboard GPS issue, then it is assumed the aircraft would not be able to maintain a precision hover. However, it can. Also, the aircraft also has a slight left turning drift tendency in a hover.

This new home issue led to my overlooking that on start the home point or landing zone (LZ) recorded by the aircraft was inaccurate. This has never been an issue in the past, so I did not think to verify it.

My plan was to fly all batteries to minimum flight and have the aircraft automatically descend to land to test full flight time. The flights were conducted in a hover approximately five feet off the ground and without any camera payload to minimize any potential camera damage if the aircraft failed and had a hard landing. The lack of a payload would extend flight time.

Historically the landing zone area I used has been adequate, open to the sky, restricted access to outsiders, and was unobstructed.

Because of the issue, I’m about to describe the second test flight turned into one of the scariest test flights I’ve ever conducted.

The weather was mild with a slight breeze. The sky was overcast. 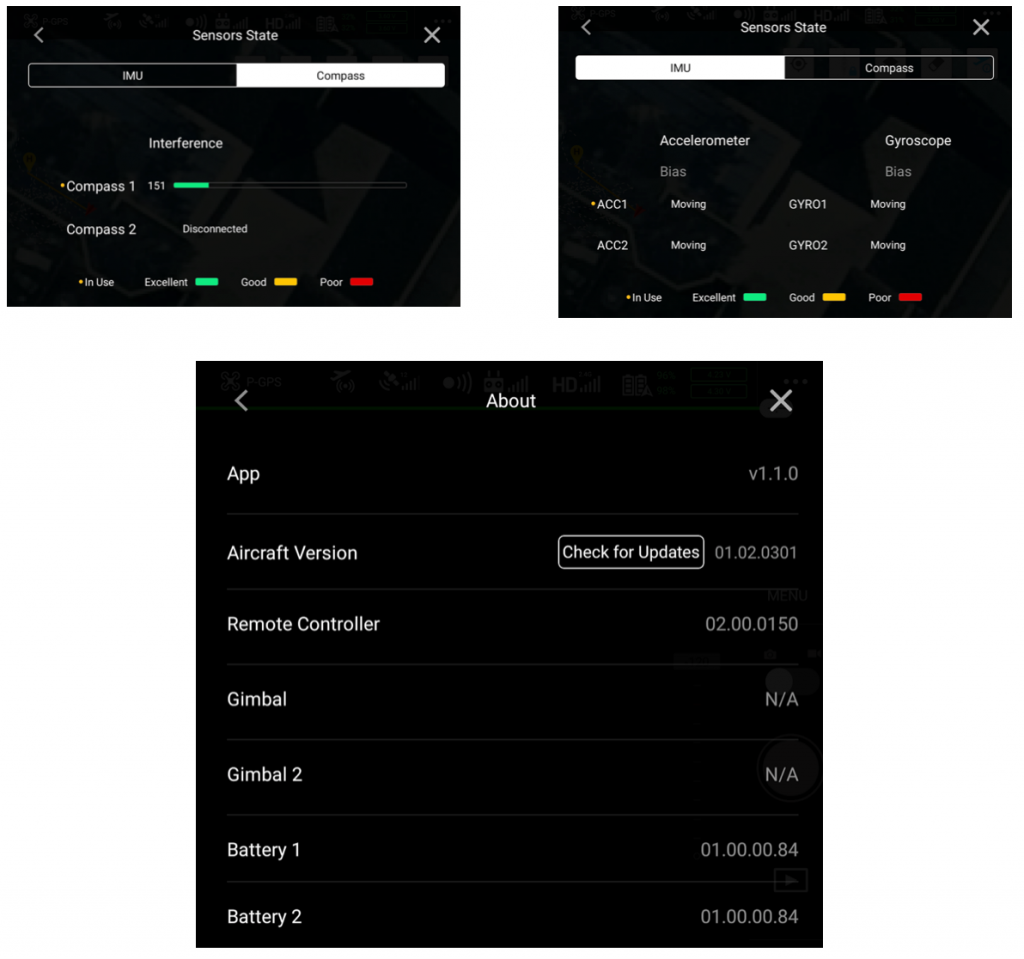 Hover Picture – The dog toy on the railing was used to determine if aircraft would hold its location with it in the center video. LZ Location – It is abundantly clear I need to sand and stain my deck again. 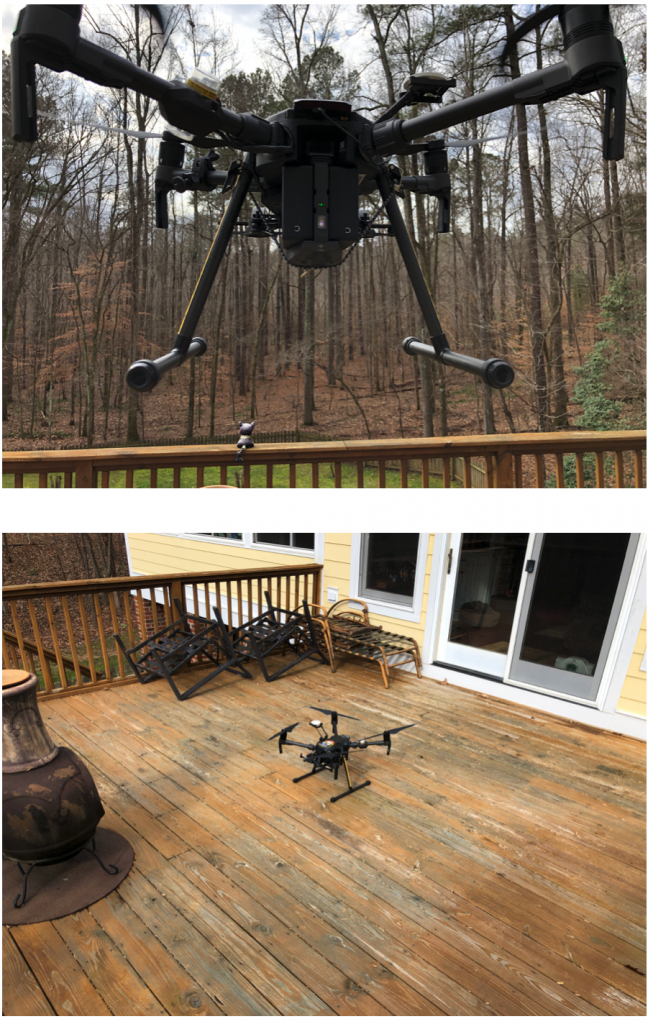 Historically when a return-to-home (RTH) process is started during a normal flight the aircraft will ascend to the designated altitude, which I typically set at 120 meters and then descend at the home point from which it launched. So the minimum setting of 20 meters in the flight location would have been sufficient.

Apparently when the aircraft launched after a minute or so of sitting in the open and resting the home point was determined to be far off the actual location. When the aircraft reached the minimum battery level to be able to return to home it initiated a Smart RTH procedure and instead of just descending to land as it did on test one it ascended to the designated altitude to land at the LZ recorded.

You will see in test flight below that the home position was thought to have been inside a wooded area. The aircraft automatically flew into the top of the trees and how I managed to keep it from crashing into the trees is beyond me.

While I was able to get it out of the tree limbs without collision there was little directional control since it was engaged in the automatic landing function. I did attempt to steer the aircraft at least to the open area but moving the aircraft to the left was difficult to achieve. I was able to pull the aircraft back towards the actual LZ but it continued to fly, to want to go back to its recorded Home point.

This can all be seen in the image on the second test flight below. I fought repeatedly with the aircraft to attempt to regain full control and land it in a safe area. As the aircraft neared total exhaustion I was somehow able to bring it back and land it safely at the original LZ.

On subsequent flights, I attempted to manually set the home point before the flight, with marginal success. The aircraft and controller both reported positions that were substantially off the actual LZ.

I also turned off the Smart RTH function to prevent the aircraft from automatically flying to an errant home point.

At this time Firebird 1 can be returned to service with all batteries but should not fly outside line-of-sight or at night since the position the aircraft is reporting on the controller is not the actual flight location.

While the error demonstrated in the flight test may seem small, there has been no testing with the aircraft flying at some distance and determining accuracy. Without management, approval to conduct such a test I am hesitant to engage in such a test flight for fear of losing the aircraft.

This brief video  [ https://youtu.be/9AWL2zLxuYQ ] shows the location error I’ll describe in the test flight data. You can see the aircraft hovering in a steady position but the software believes the location of the controller and aircraft are in locations they are not.

You can see the aircraft hovering steadily at the center of the deck. When you look at the screen the aircraft location is represented by a red triangle.

The yellow H is where the aircraft believes it launched from. The controller location is represented by the blue dot, which you can’t even see until I zoom out.

When I zoom in on the controller you can see the white line which represents the aircraft path it believes it has flown. In reality, the aircraft has been kept in the hover position you see above.

The flight path is recorded incorrectly on the displayed map.

This video [ https://youtu.be/eV8ixkcoktk ] shows some of the battery errors and incorrect battery critical reporting we were having prior to the firmware update.

While I do have test data for each set of batteries, the set of results I’m posting below specifically addresses the flight where I discovered the position reporting error. 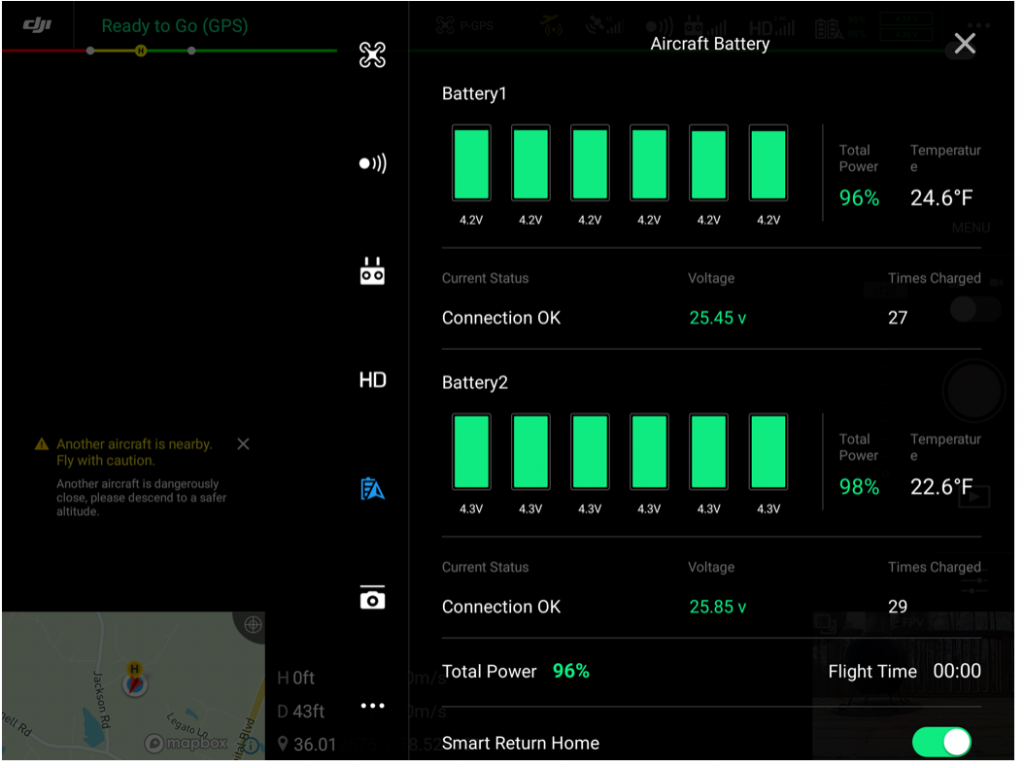 The flight was normal until reached minimum battery levels and landing was initiated by aircraft. 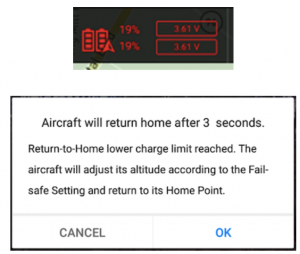 Upon RTH the aircraft departed its actual LZ and ascended to RTH altitude. The aircraft had set an incorrect home point and control of the aircraft was regained as it entered tree canopy indicated towards H on the image.

Direction inputs on the controller were not operating correctly. The aircraft had a very difficult time of moving left but accelerated going right almost out of sight. I immediately ascended to avoid tree canopy and initiated emergency inputs to attempt to keep the aircraft in sight.

Controls were not operating as they should. As you can see on image below, the flight path became erratic. Landed with 6% battery life. 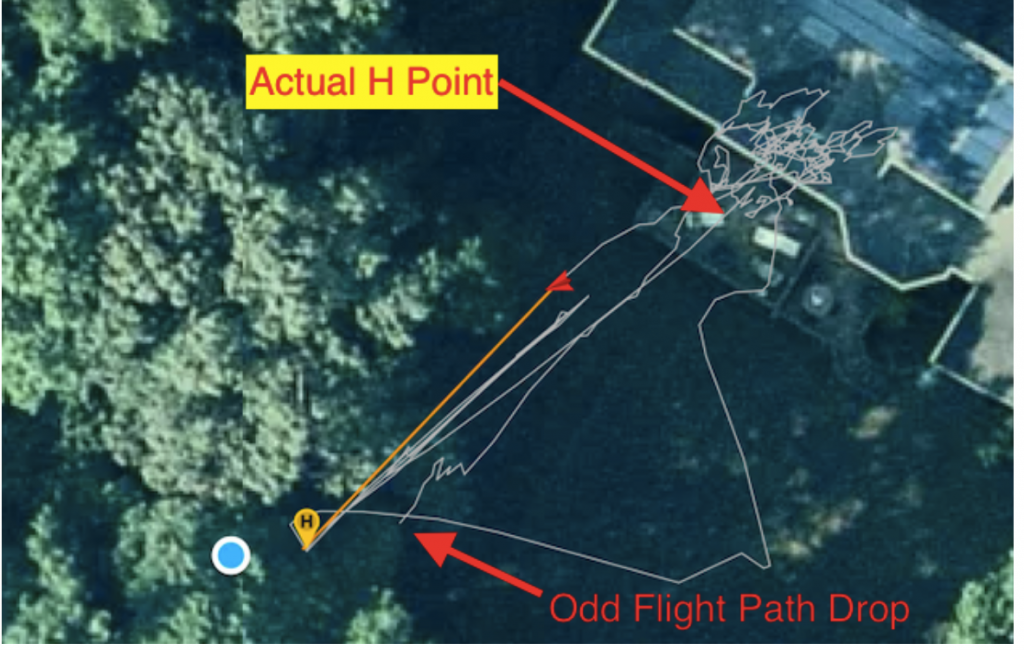 In the image above you can see the home point was incorrectly set by aircraft. Even after landing the red triangle aircraft continued to move towards H point. The controller believed it was where the blue dot was but the actual H point is indicated on the image.

Flight path shows odd artifact of a dropped end in mid-flight. Once aircraft entered tree canopy I felt there was a near certain loss of the aircraft.

Eventually, I was able to gain enough control of aircraft as it was attempting to auto-land. The last minute of the flight is shown in the line from H to the right.

This time after starting aircraft and controller I allowed the aircraft to sit motionless for several minutes to obtain accurate H position. It would not. I attempted to set the position manually but it would not record correctly. I also turned off Smart RTH so it would not head off autonomously.

The majority of the time both the controller and aircraft were not displaying in the correct location. As much as 50 feet off. The aircraft was positioned in the center of the deck during the entire orientation time. The controller stated as many as 11 satellites were being received. 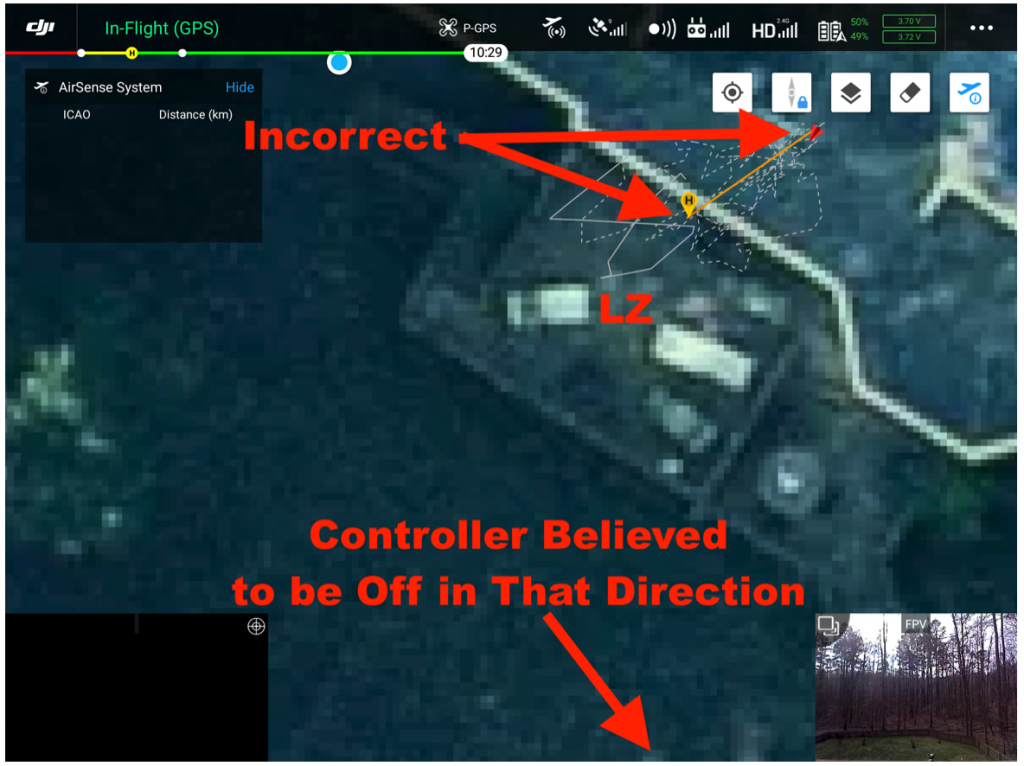 The controller gave a warning message that only enough power was available to safely execute a RTH while the aircraft was actually hovering above the LZ at 5 feet. The landing battery condition can be seen in the next image. 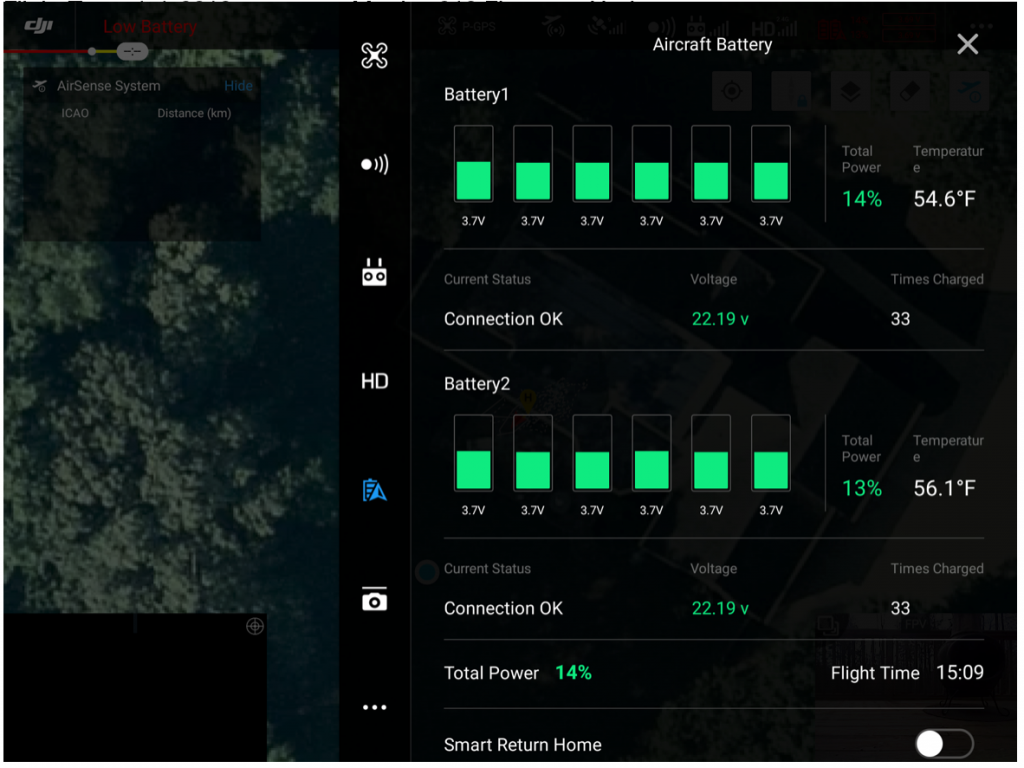 If you have any feedback, advice, or want additional information, please use the form below.