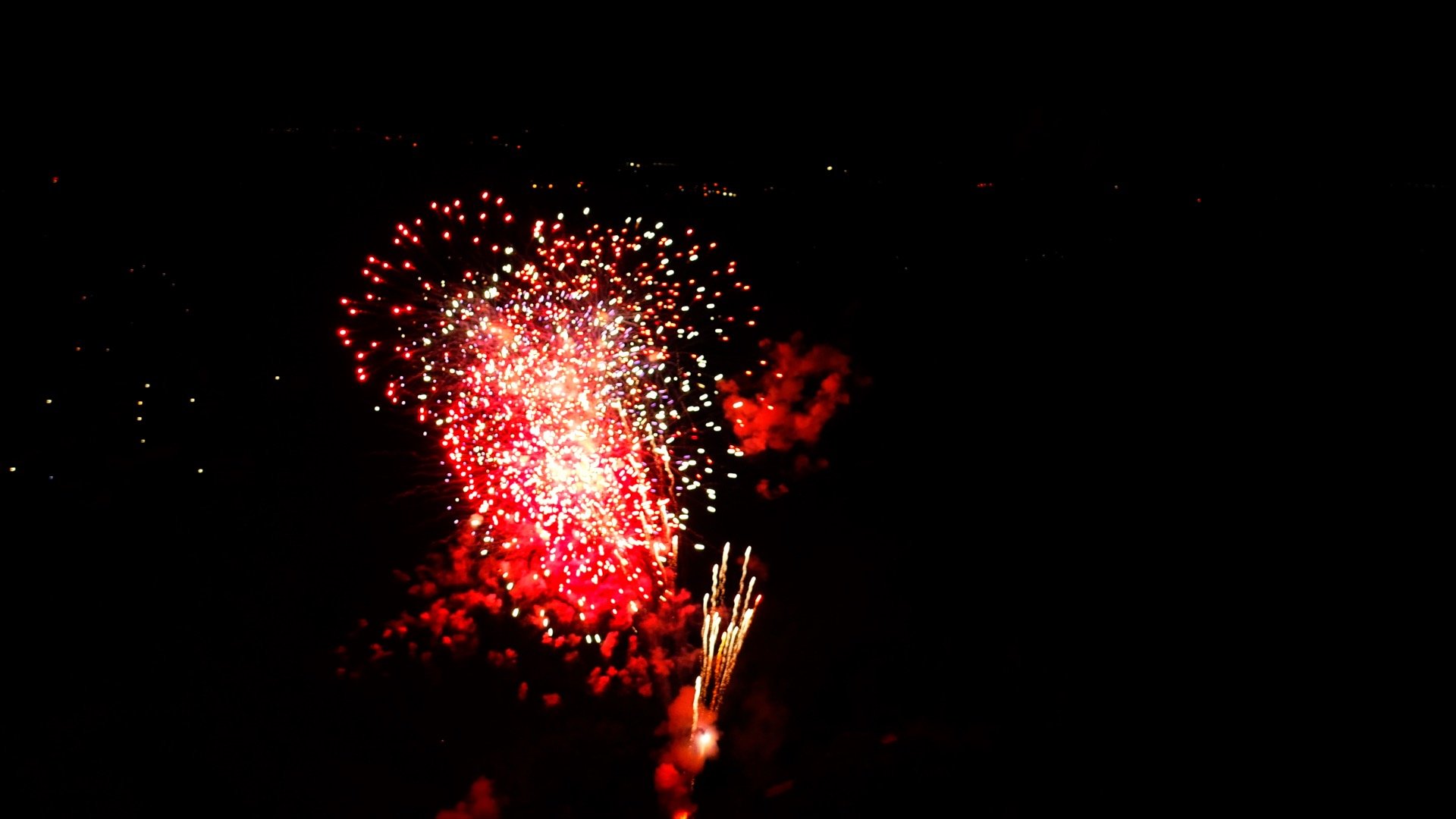 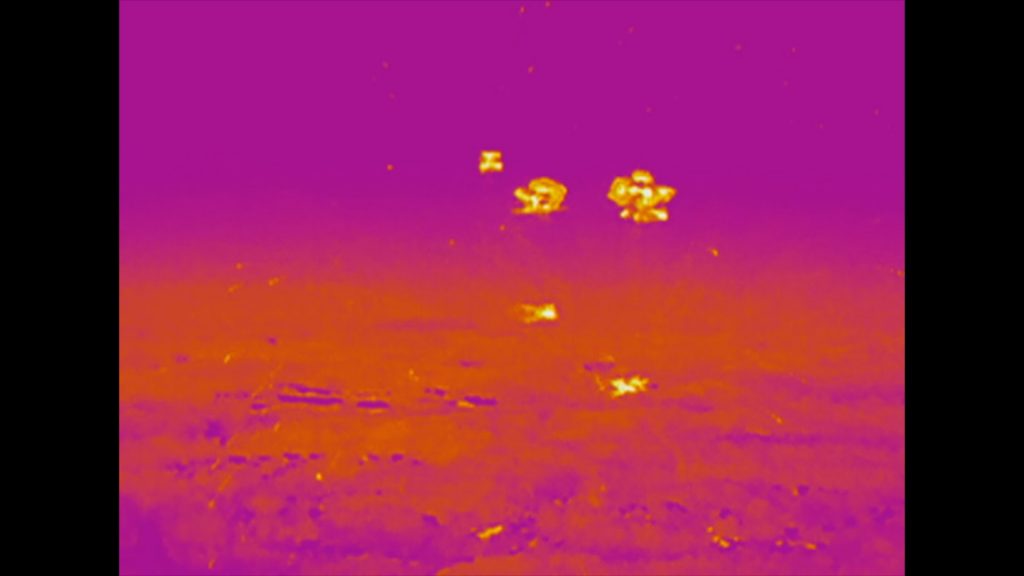 The exploding shells had a very interesting thermal signature. Keep in mind that a thermal camera detects infrared energy and converts it into an image we can visualize. So what we are seeing here is infrared energy when compared to the rest of the visual scene.

In this image we see the moment high-level fireworks explode and generate maximum thermal energy.

The initial burst point generated hot gas clouds, about the size of the explosion point, that could be visualized drifting horizon, with the prevailing wind. The measurable heat dissipated in less than ten seconds. The heat did not descend nor rise. It remained at the same altitude until it appeared to be harmless and not a factor. 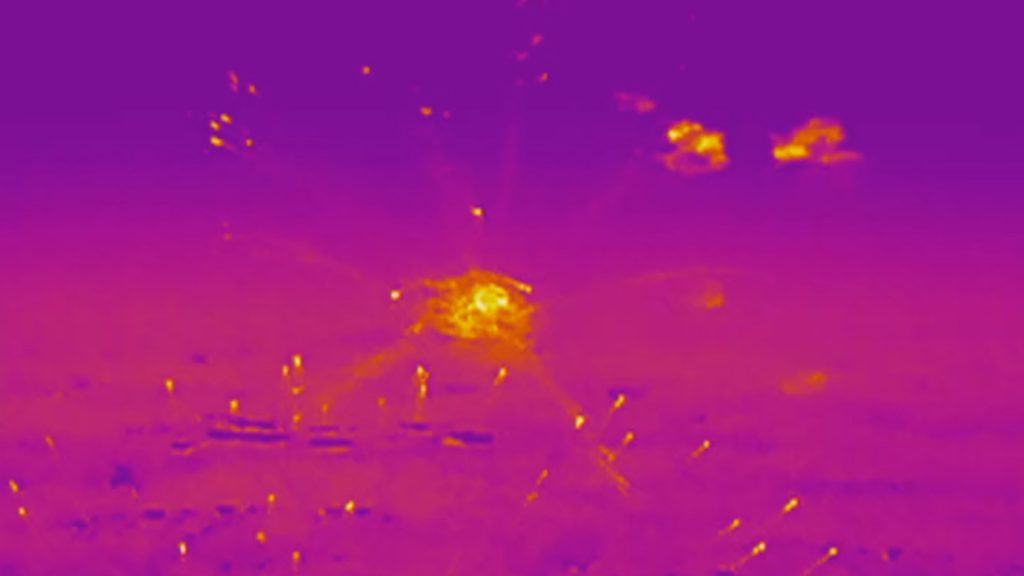 In this image we see two hot gas cloud bursts from the previous shells in the top right quarter. They have drifted from the point of explosion near the center of the frame to the right of the frame with the wind.

The smaller explosions that radiated out from the primary detonation dissipated quickly and had a shorter duration. 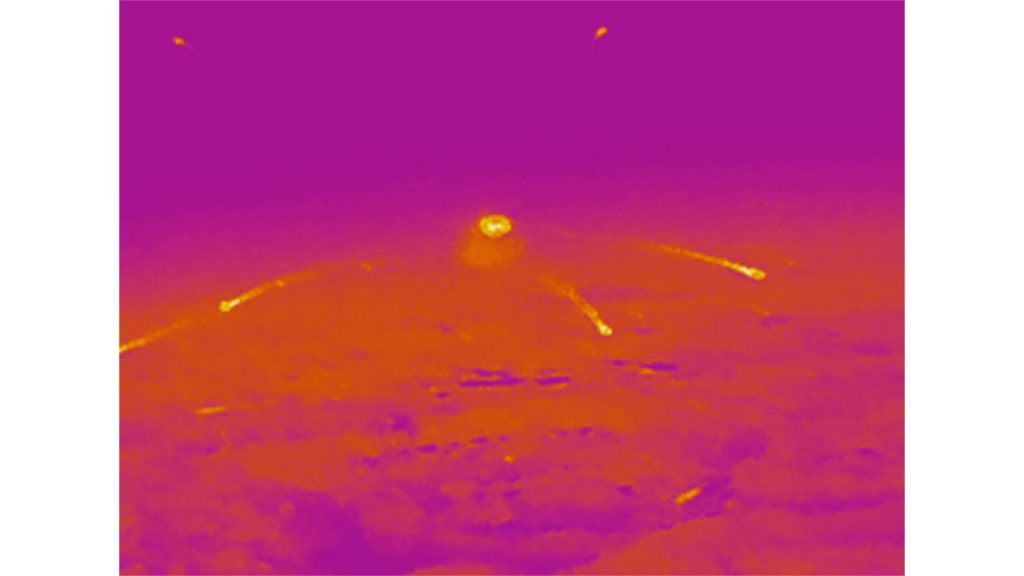 Here is a better isolated view of a single central detonation and radiating arms.

It was interesting to note the point of detention had no energy creating directional speed but the radiating bursts appeared to have some mass to them and were directionally propelled giving the secondary radiating effect.

According to what research I have done, these radiating arms are called stars. “Stars come in all shapes and sizes, but you can imagine a simple star as something like sparkler compound formed into a ball the size of a pea or a dime. The stars are poured into the tube and then surrounded by black powder. When the fuse burns into the shell, it ignites the bursting charge, causing the shell to explode. The explosion ignites the outside of the stars, which begin to burn with bright showers of sparks. Since the explosion throws the stars in all directions, you get the huge sphere of sparkling light that is so familiar at fireworks displays.” 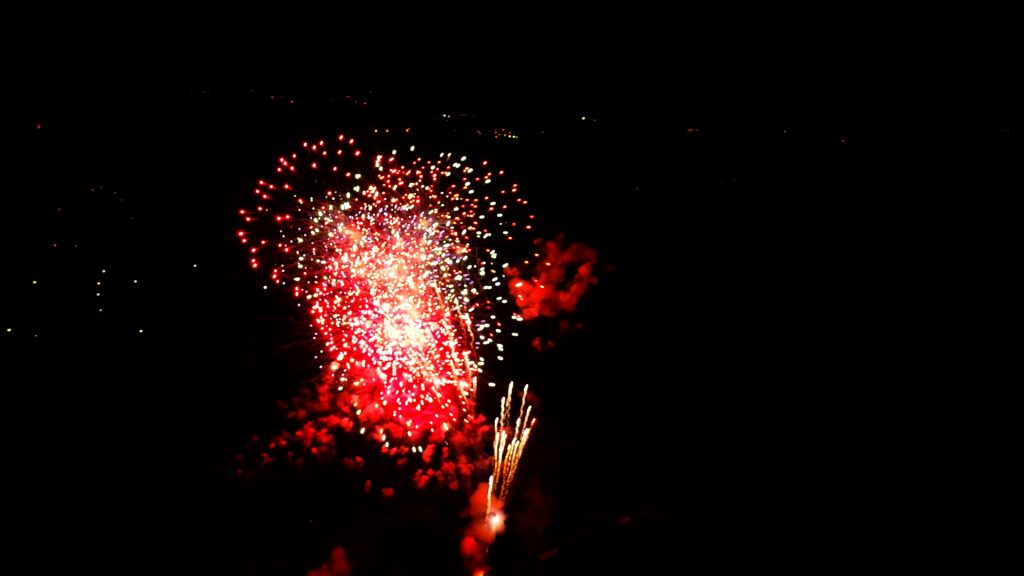 From my vantage point it appeared the shells that could create the most concern were those that exploded closer to the ground. Those shells can have arm velocity that could drive a still hot part of the explosion into some ground based combustible material.

One distinct opportunity for improvement was experienced after the show as I flew the are to look for residual hotspots. Two issues emerged.

The first issue was more time would need to pass before a noticeable hotspot on the ground could be differentiated from any of the many hotspots normally occurring on the ground in our area. The primary thermal sources seen were manhole covers, people, and deer. Any attempt to locate a small burning area until it became larger to properly identify would have sent manpower in hundreds of directions.

A major drawback of any thermal camera is that they don’t show fire, but heat. Not all heat is the result of a combustible source. Attempting to identify a small smoldering fire from any other heat source is very difficult. 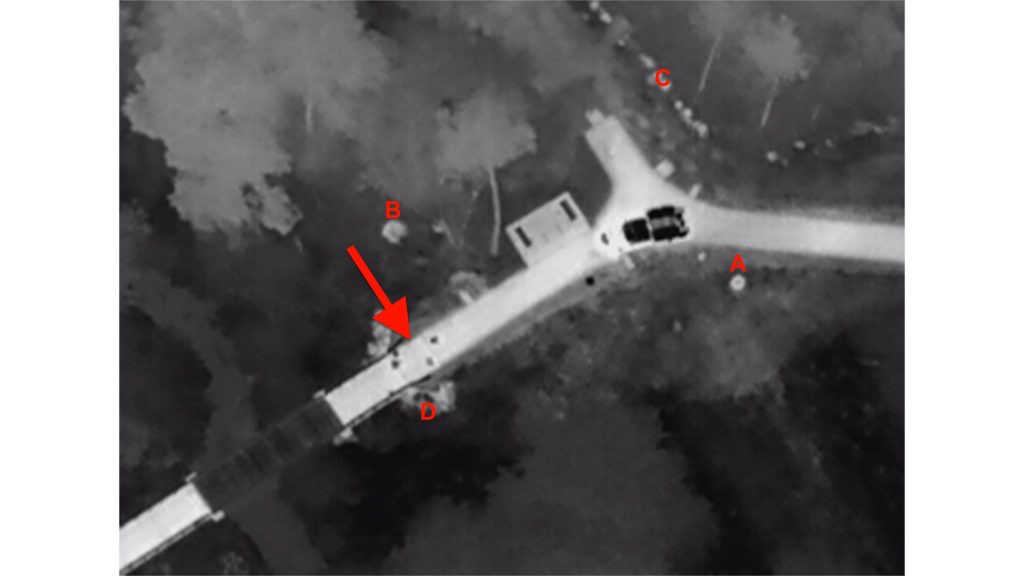 But the primary lesson from the night came in directing manpower to a specific point.
Following the fireworks event, Firebird 1 was flown over the launch site to look for any potential fire. In the image above the camera palette is set to white hot so the warmest areas will show as the whitest.

You can see the asphalt path retained a substantial amount of thermal energy from the sunlight. The scene contains a number of thermal points that need to be filtered out.

A) This is most likely a manhole cover. They tend to have strong round borders and cooler centers.

B) This was the primary are we were trying to direct firefighters to get eyes on. The shape was irregular in appearance and was located close to the launch area.

C) My best guess for this line of heat signatures would be a line of boulders, rocks or gravel that retained the heat from the day. A lone spot in line C would be a concern to explore further but the thermal spots appeared to be orderly over an extended area and thus most probably not evidence of fire.

D) This appeared to be potentially a rock base for the bridge or erosion protection make of rock or boulders that retained heat from the sunlight.

In attempting to direct firefighters (arrow in above and below image) to point B the obstacles were:

A) We could not identify who was the subject in charge we were giving directions to. This led to us giving directions based on the general formation of the three-person group with no idea which direction the group was collectively facing.

B) The ground manpower continued walking while directions were being relayed over the radio. This caused a brief delay and the group has passed the point of concern. 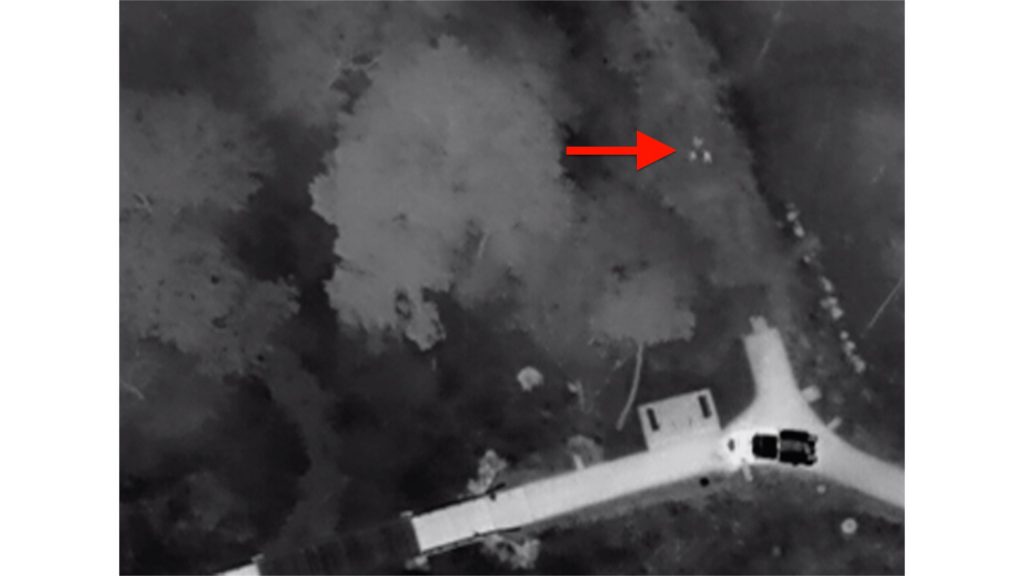 At one point we managed to get the three person group substantially lost looking for the previous point labeled B.

The solution for this problem Would be for the leader on the ground to carry a flashlight and when asked, to point it at Firebird 1 so we could specifically identify the leader.

Next, once identified, it would have worked out better if the leader was directed to a point and stopped. For example, cross bridge and stop. Then the next directional assistance could be given.

Keep in mind that what I see in the thermal camera does not represent what is necessarily visually seen on the ground. What can appear as a hot thermal target, as in B, may not be visible to the human eye on the ground.

So what we are left with is a desire for me to navigate manpower, at times, to a target they can’t visually see.

If target B had been a thermal event generated by fire the chances were higher it would have been visible by firefighters.

Landing Zone identification was a success. 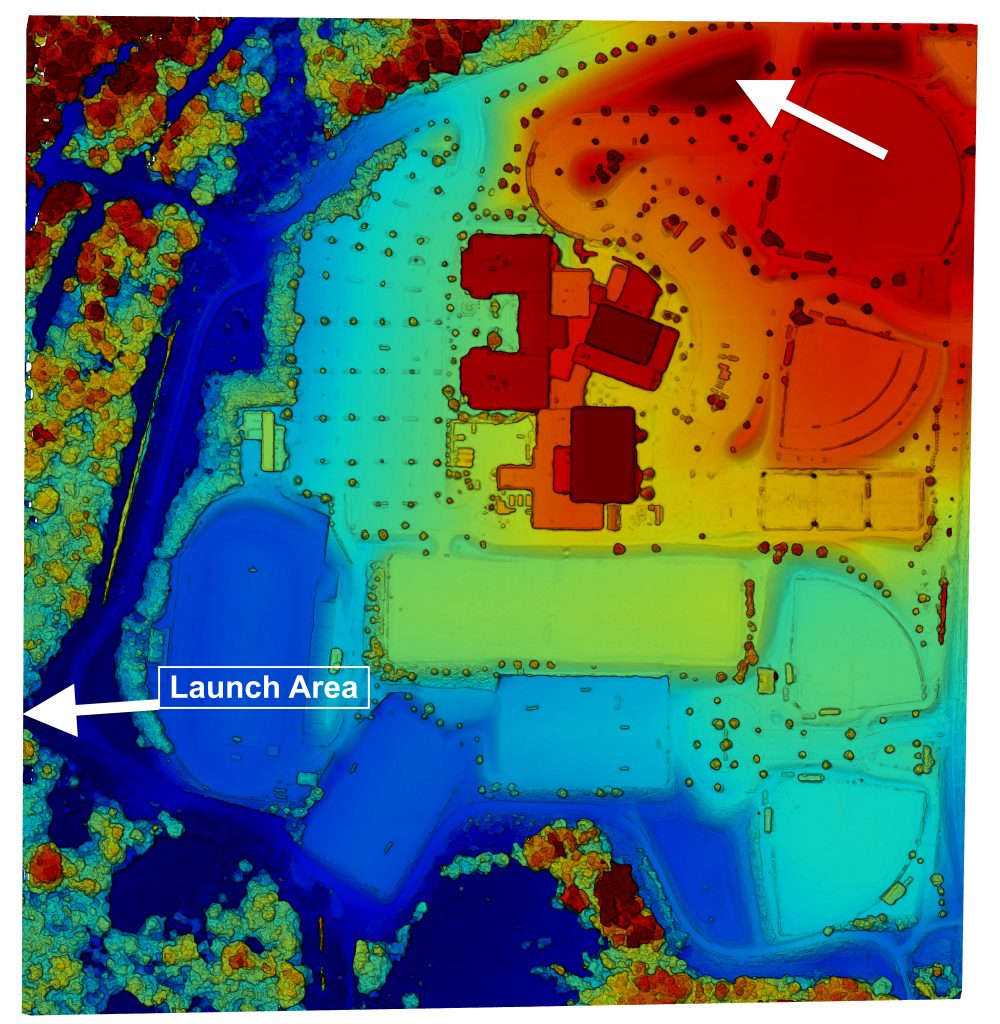 Prior to the event I flew a topographical survey and 3D map of the event location. I was able to identify potential best landing zones based on primary area to be covered in the event of an emergency. These concerns included a law enforcement mass casualty or active shooter event and a fire emergency.

The area labeled in the last picture with the arrow in the upper-right was the highest elevation as shown by the deep red color. Other high areas would have been the top of the school but I did not want to move equipment to the school roof if metal on the roof area caused compass issues with flight. 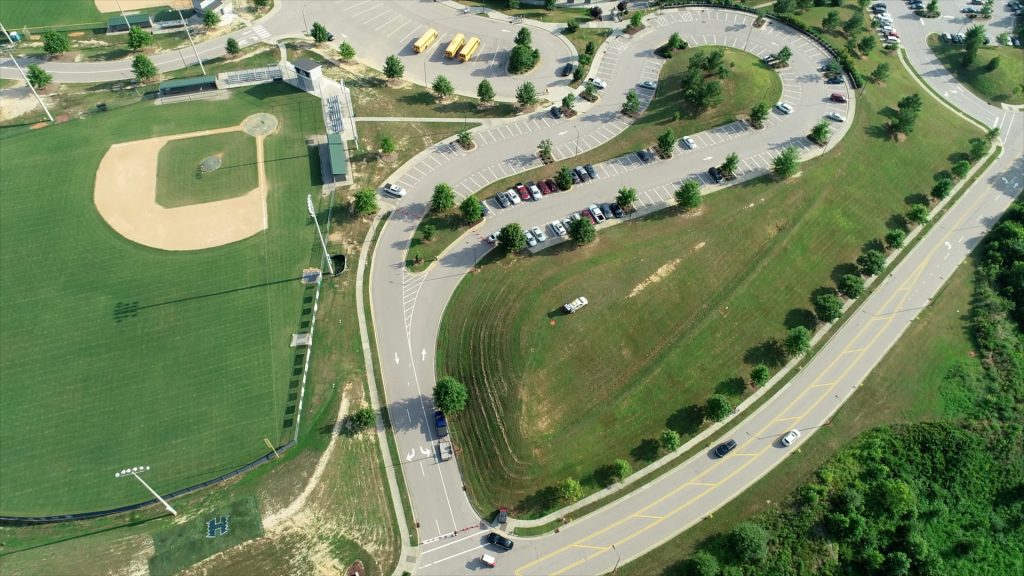 The area selected turned out to be an exceptional vantage point with the best flight reach.

Paul Eitel and I set up the LZ at the top of the hill. We ultimately had to tape off the part of the hill around the truck and LZ as firework spectators climbed the hill to watch fireworks from a point near us.

A major pat on the back goes to Paul for his professional assistance and managing the radio and communications as I flew. 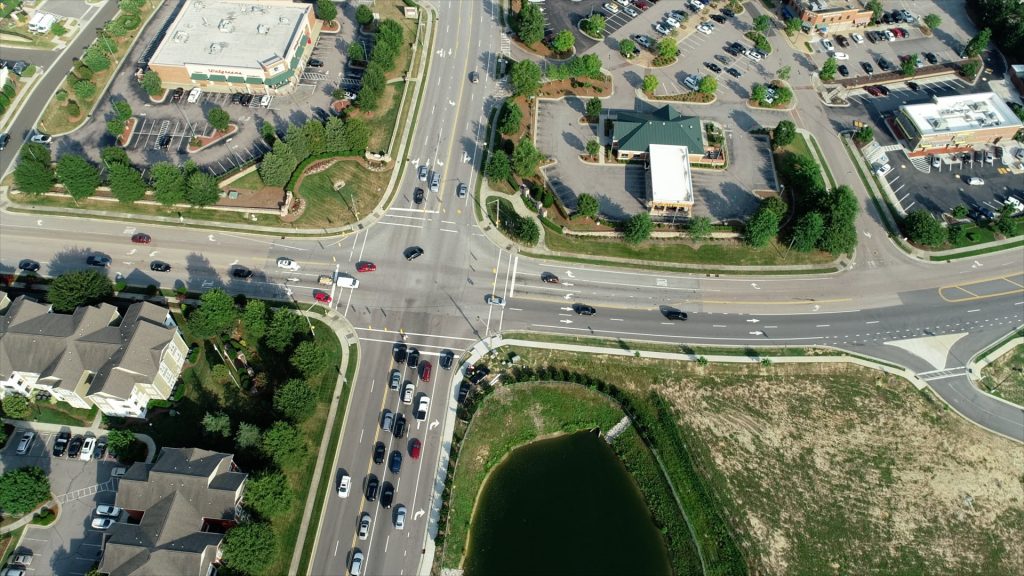 From the established LZ I was able to fly out passed the fireworks launch area and out over Rogers Road to be prepared to monitor traffic as the Police Department had requested at the event planning meeting. 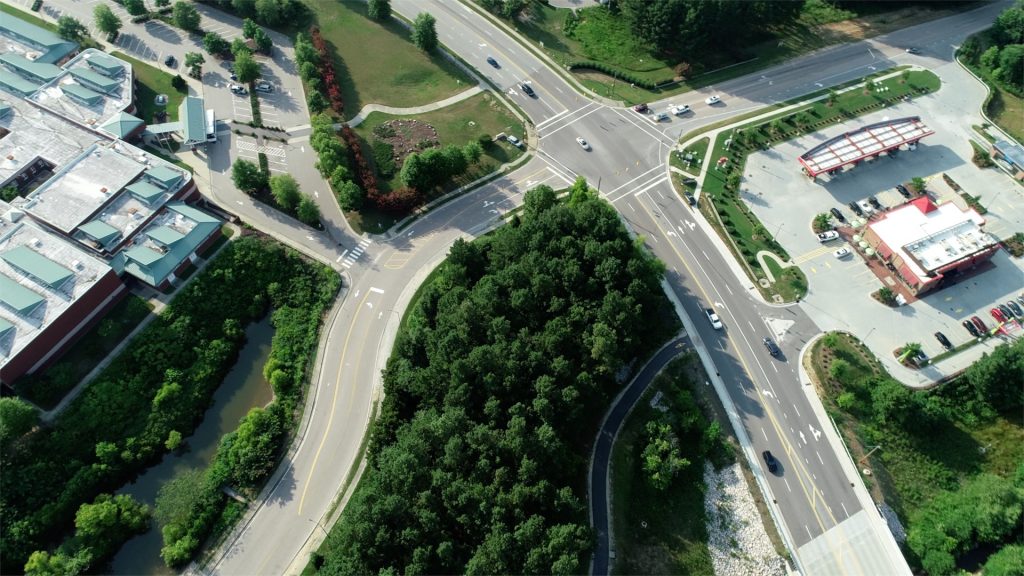 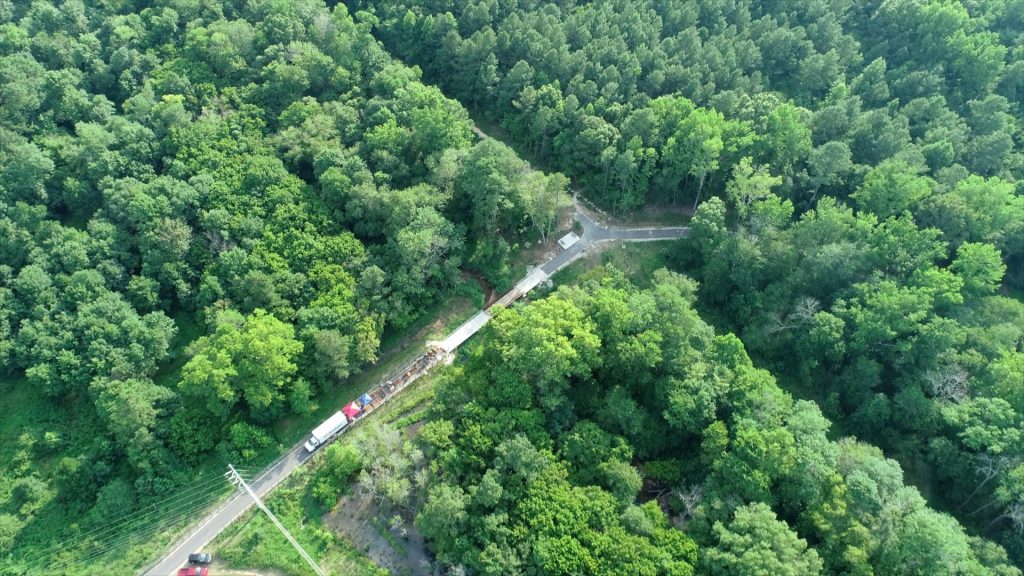 Without a doubt the primary lesson learned from the event is we need a better process to coordinate with ground manpower to find a specific thermal point that may or may not be visible. But based on this experience I now feel confident on how we could overcome this next time.

The flight video will help you to visualize the thermal cloud points I mentioned in the infrared section and you will also get to see some cool fireworks.

Have a Question or Comment? You Can Reach Me Using the Form Below