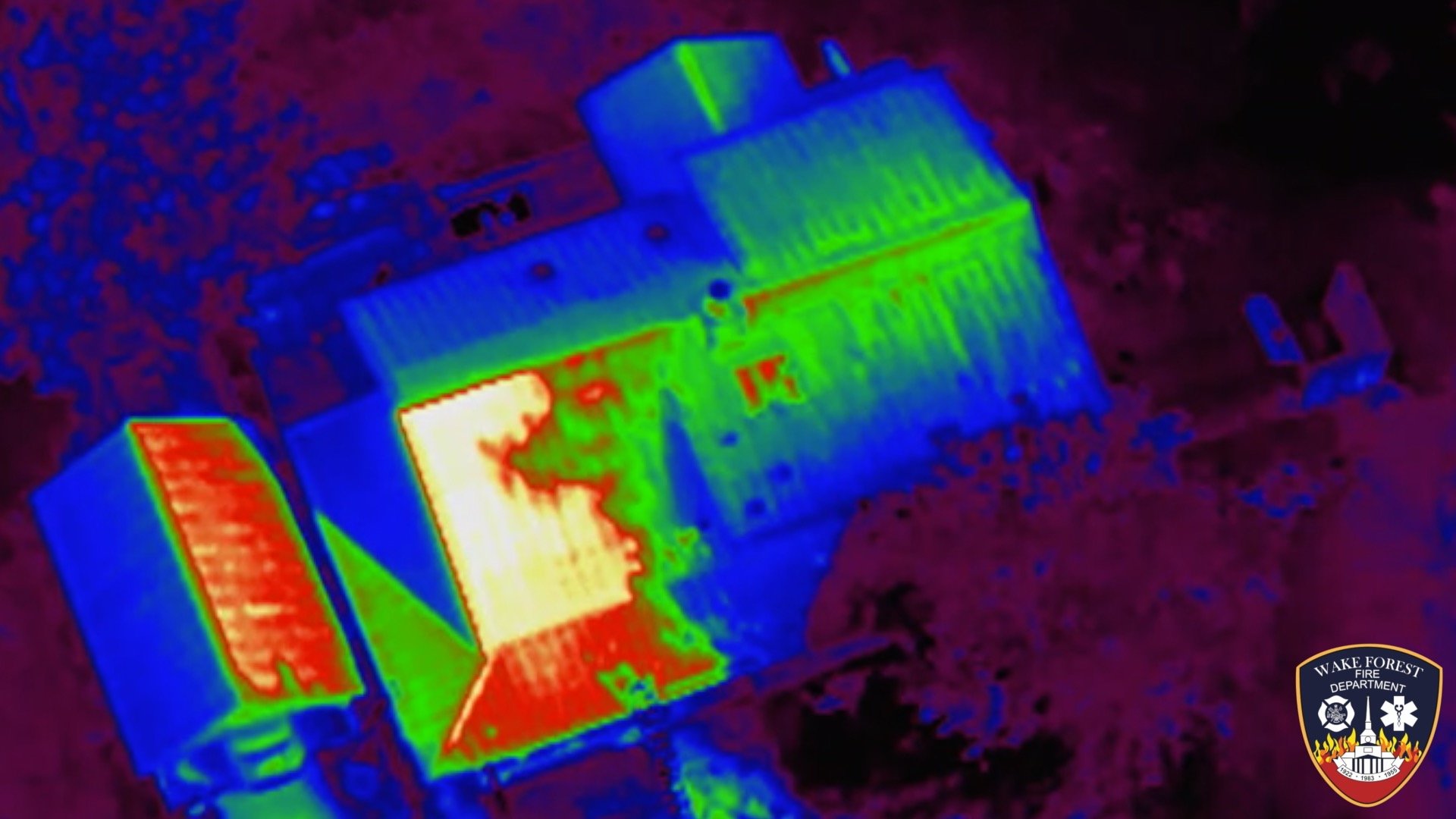 Assist command and firefighters in any way possible with actionable information. 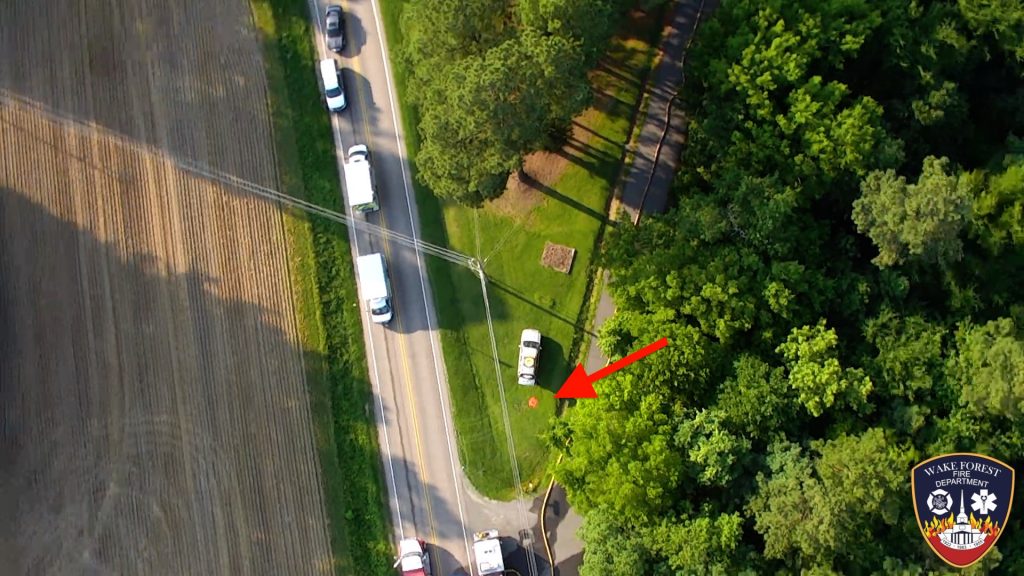 Landing Zone (LZ) was improvised based on the curve in the road and the inability to proceed any further. It was not an optimum location but it was the safest available given the circumstances. While it appears I may have been able to pull further forward to get the LZ more centrally located the lawn in this area was uneven and I wanted to minimize intrusion as much as possible. 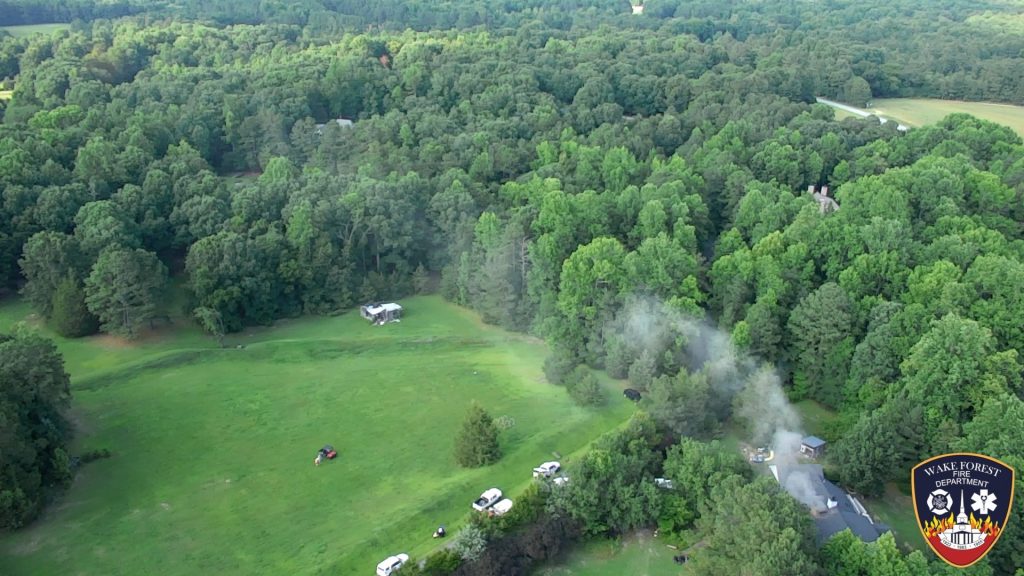 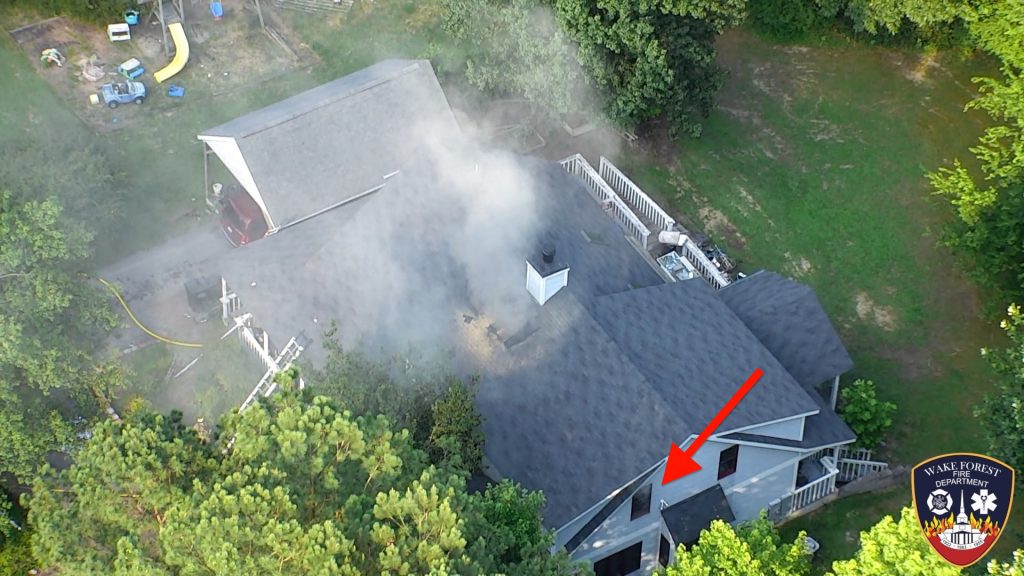 The initial view of the incident. 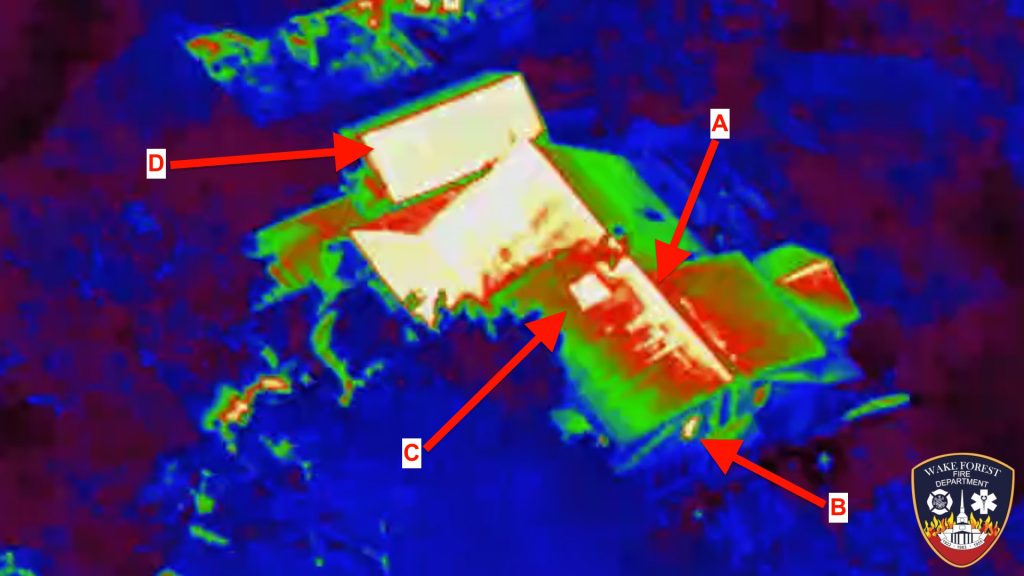 As Firebird 1 arrived over the structure the end window was observed being removed and smoke was seen venting out of window.

The initial thermal image using the rainbow palette since the ambient temperature made it very difficult to use any isotherm settings.

The rainbow palette gives us a range of temperatures but not a definitive definition of temperates in each range.

The image of the structure and area around it shows the full range of temperates available in the palette from cold to hot.

Different parts of the scene give us different clues.

(A) The ridge of the house and vent showed the warmest band of the thermal palette.

(B) The window that was initially observed to be struck from the structure was also alerting at the top of the temperature range.

(C) The vent and the area to the left of the vent also showing thermal intensity.

(D) This area was initially confusing since there was no apparent connection of the structure in D with the house. What this actually represents is the solar thermal loading from the sun striking this part of the area.

The thermal loading of the sun striking only parts of the structure made it a bit of a puzzle to determine what part of the roof was hot because of interior heat or exterior thermal loading. 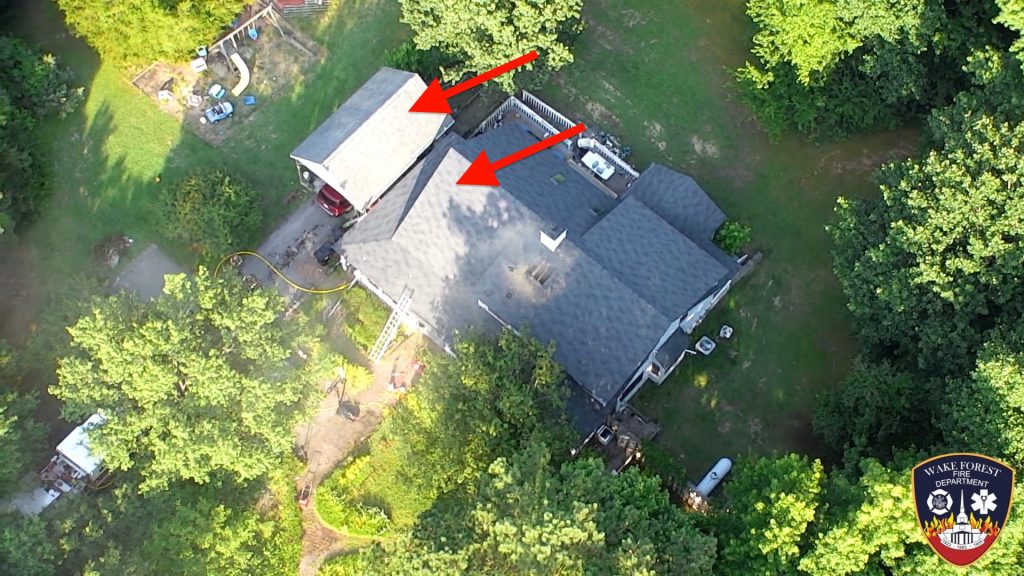 If you look at the image above you can see the areas the sun was striking and warming up. 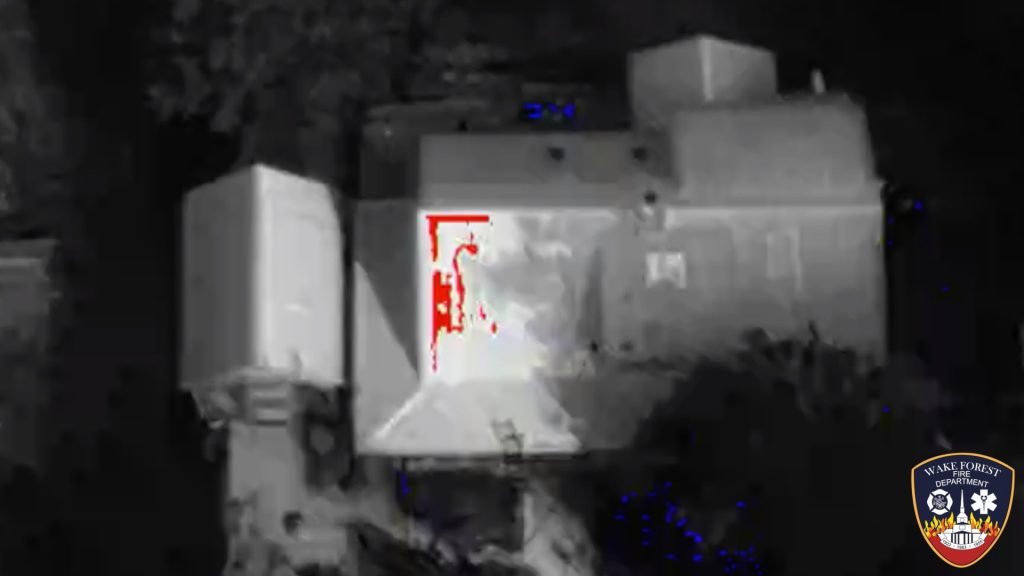 Towards the end of the event I changed the thermal palette to verify the hottest part of the scene and you can see that in the red areas on the roof. 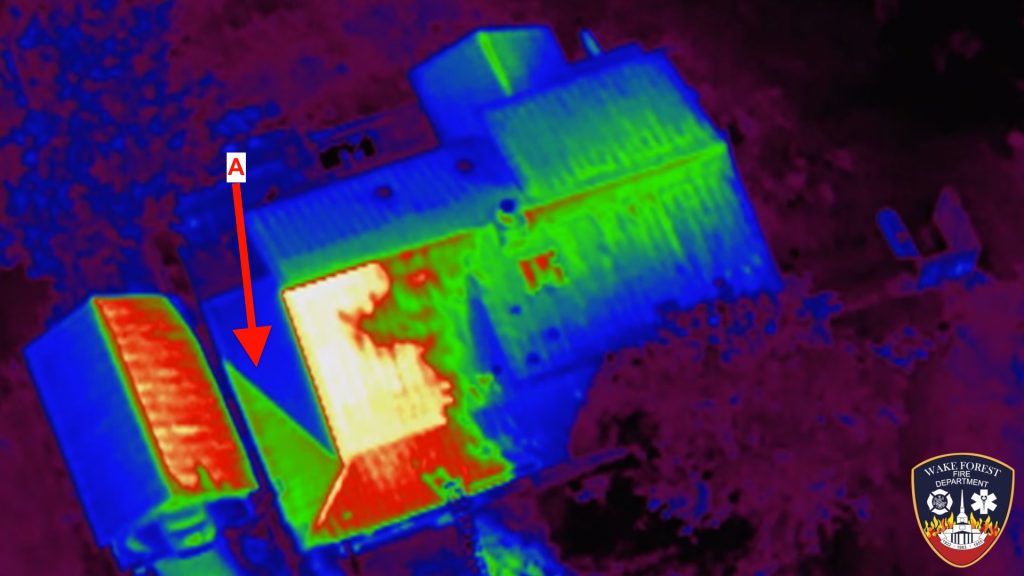 When the remainder of the roof heat from the fire was dissipated at the end of the event it was clear that a large area of the roof on the Bravo side was only alerting from the solar thermal loading. This was even more apparent that the thermal loading was occurring from forces outside of the heat generated by the fire from the line shown in the above image labeled A. As you can see line A was not only regular but extended across roof rafters running the other way.

Another good example of the solar influence on the thermal image can be seen better in the image below that is from the end of the incident. 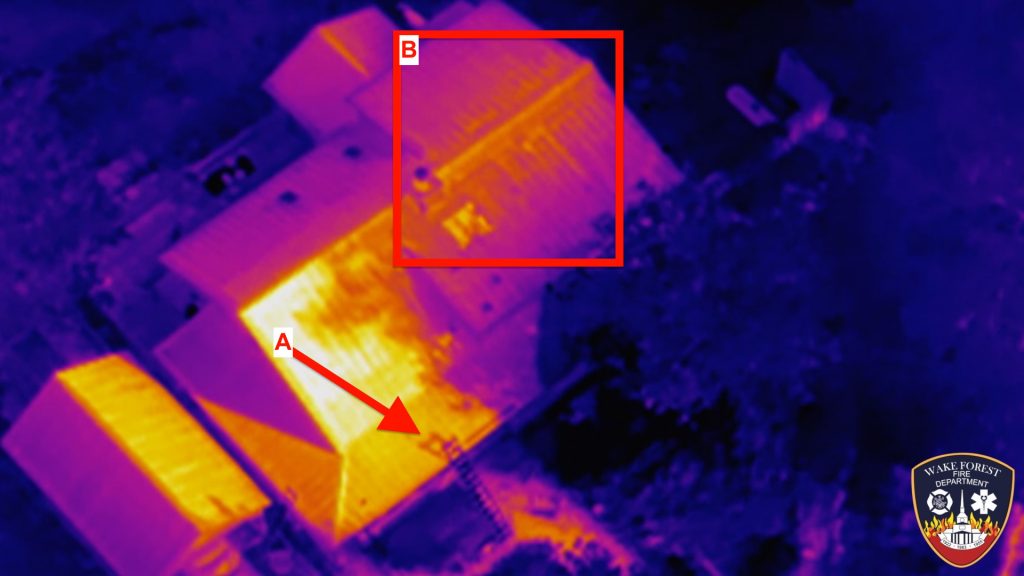 In A we can see the shadow of the ladder and how that area is slightly cooler than the immediate surrounding roof. Area B remained in the shade for the duration of the event so the residual thermal signatures are the result of the incident or normal heat patterns. However, you can see the vent hole is still emitting thermal energy and the pattern along the ridge is indicative of that seen in cooling after the removal of the heat source. This can be most appreciated when comparing the thermal images from the start of recording to the end of the event. 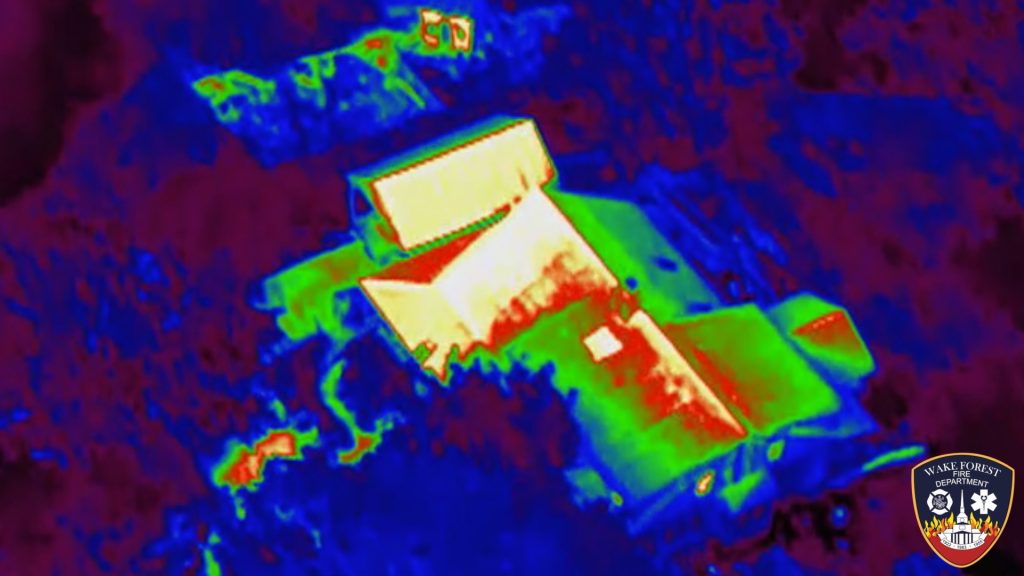 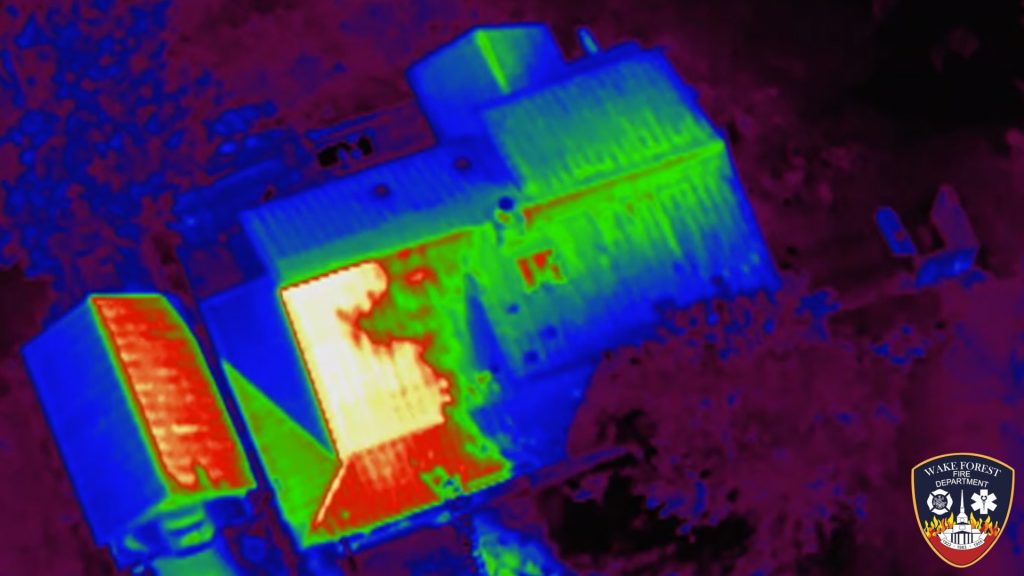 When you compare the two images you can better understand what I was trying to relate with my one radio call to command that the roof was showing signs of rapid cooling. 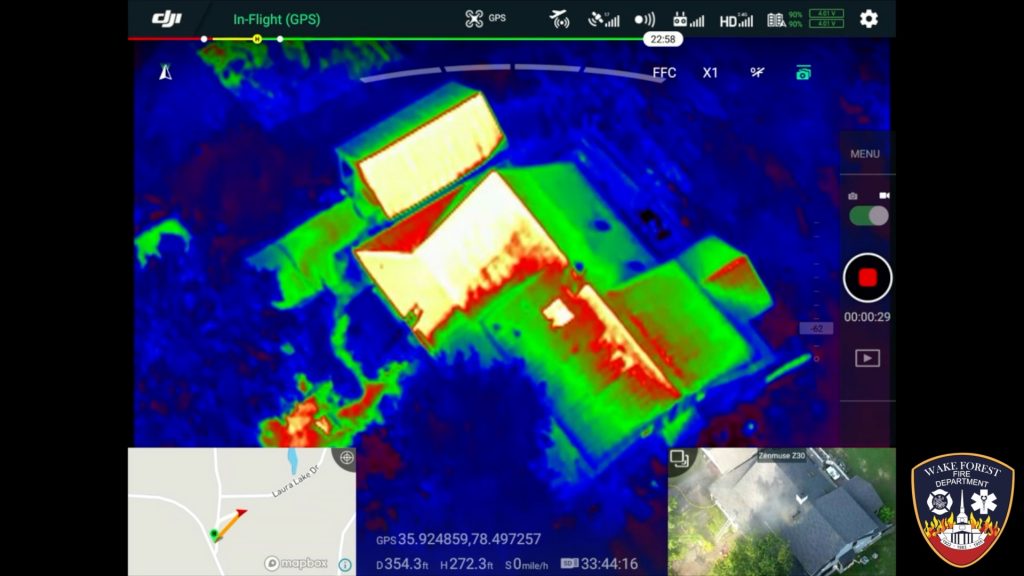 The image above shows both the initial thermal image and the initial visual image in the lower right.

While the area around the vent hole may look as if sun is striking it, on closer inspection, it is sawdust around the opening.

The vent, ridge, and Delta side window are clearly emitting thermal energy that appears related to the fire inside the structure.

Other images that may be helpful in an operational debrief are included below. 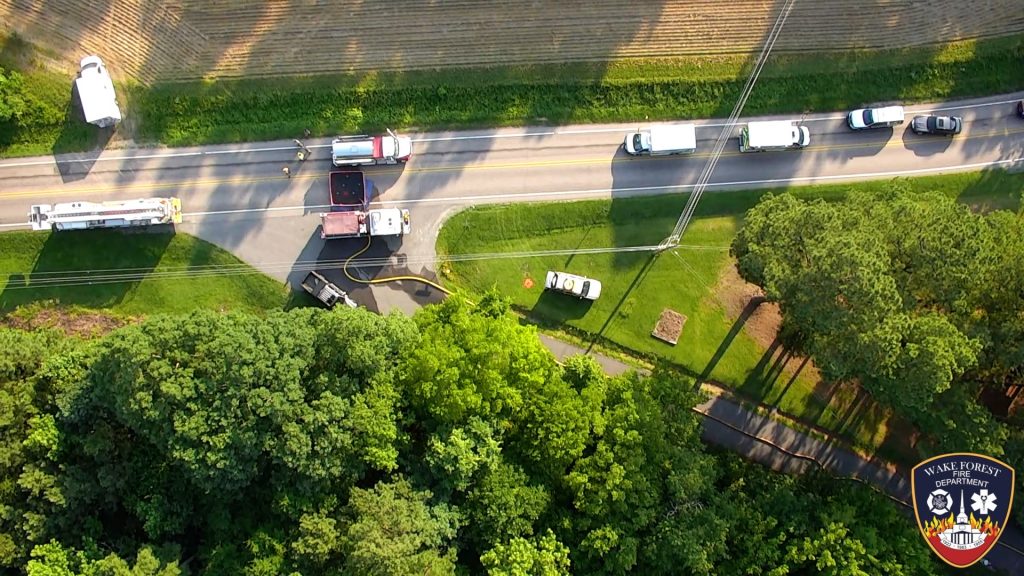 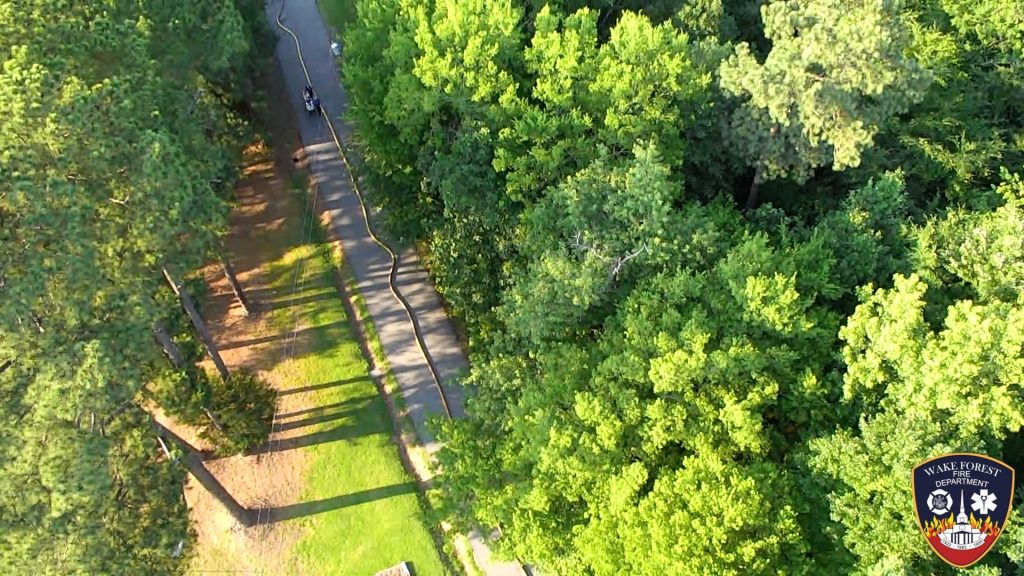 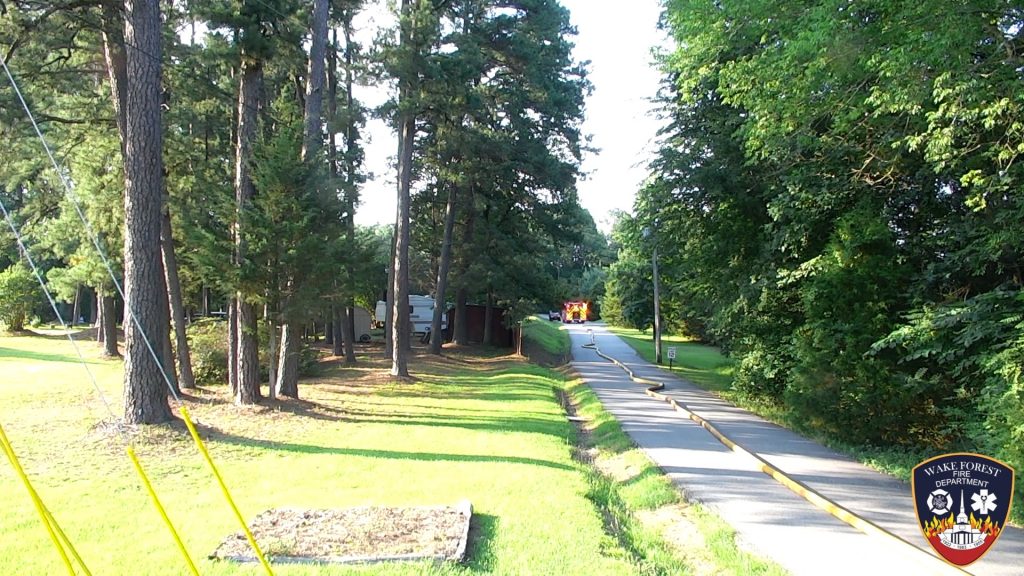 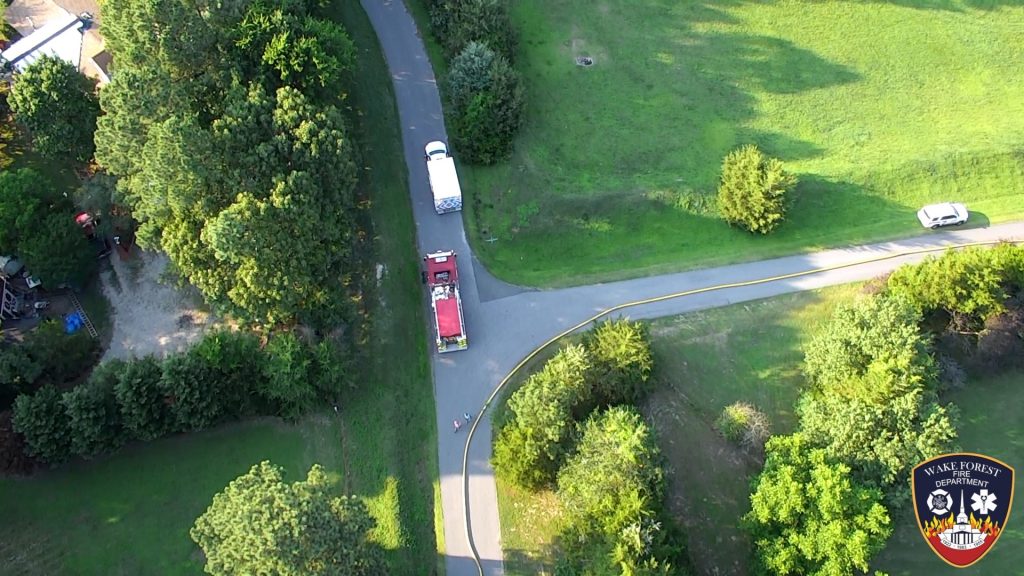 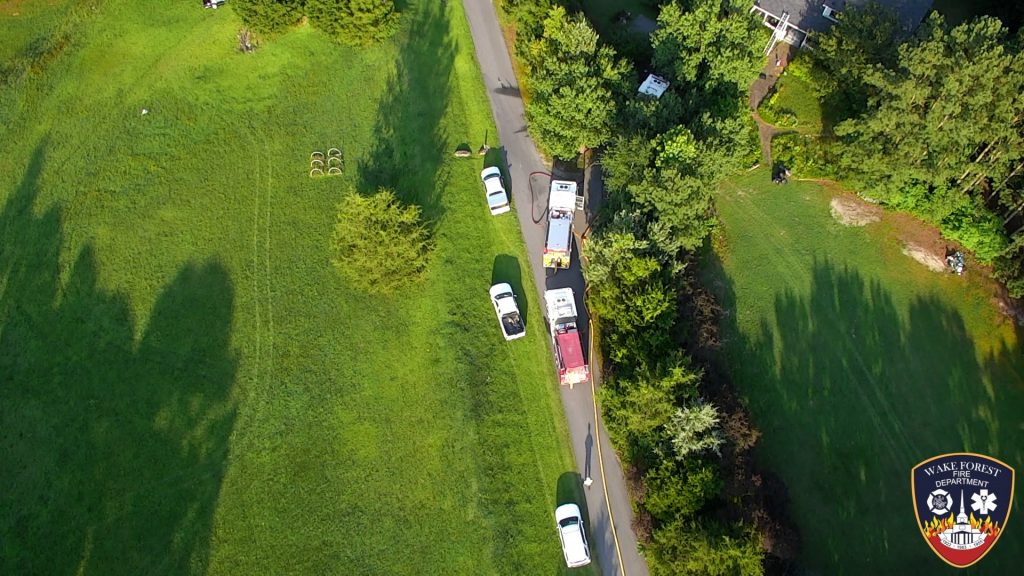 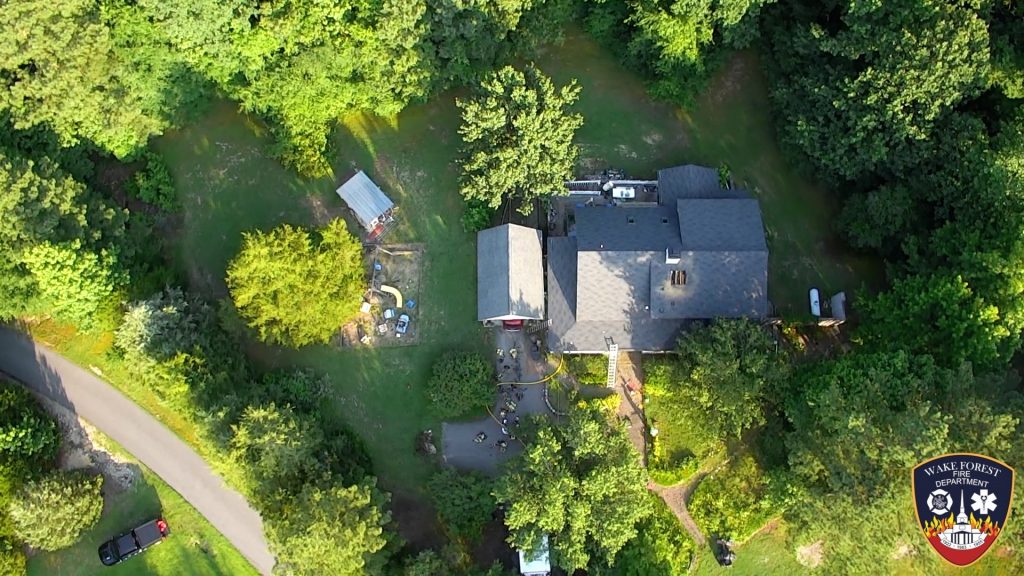 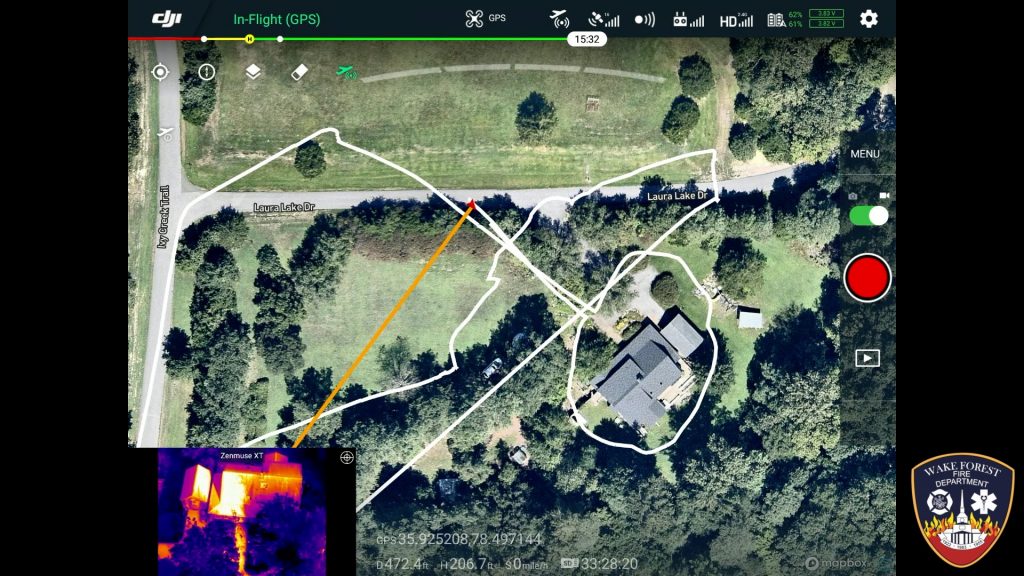 The flight video linked above shows substantially more information. Of particular interest will be a 20X view of the incident from the thermal camera showing the roof temperature changes as well as a 360 degree view of the property. You will also see how tight the LZ actually was as well as views of the water supply operation.

Continue flights and discussions about data generated to determine the operational advantage, if any, to command staff from airborne imagery.