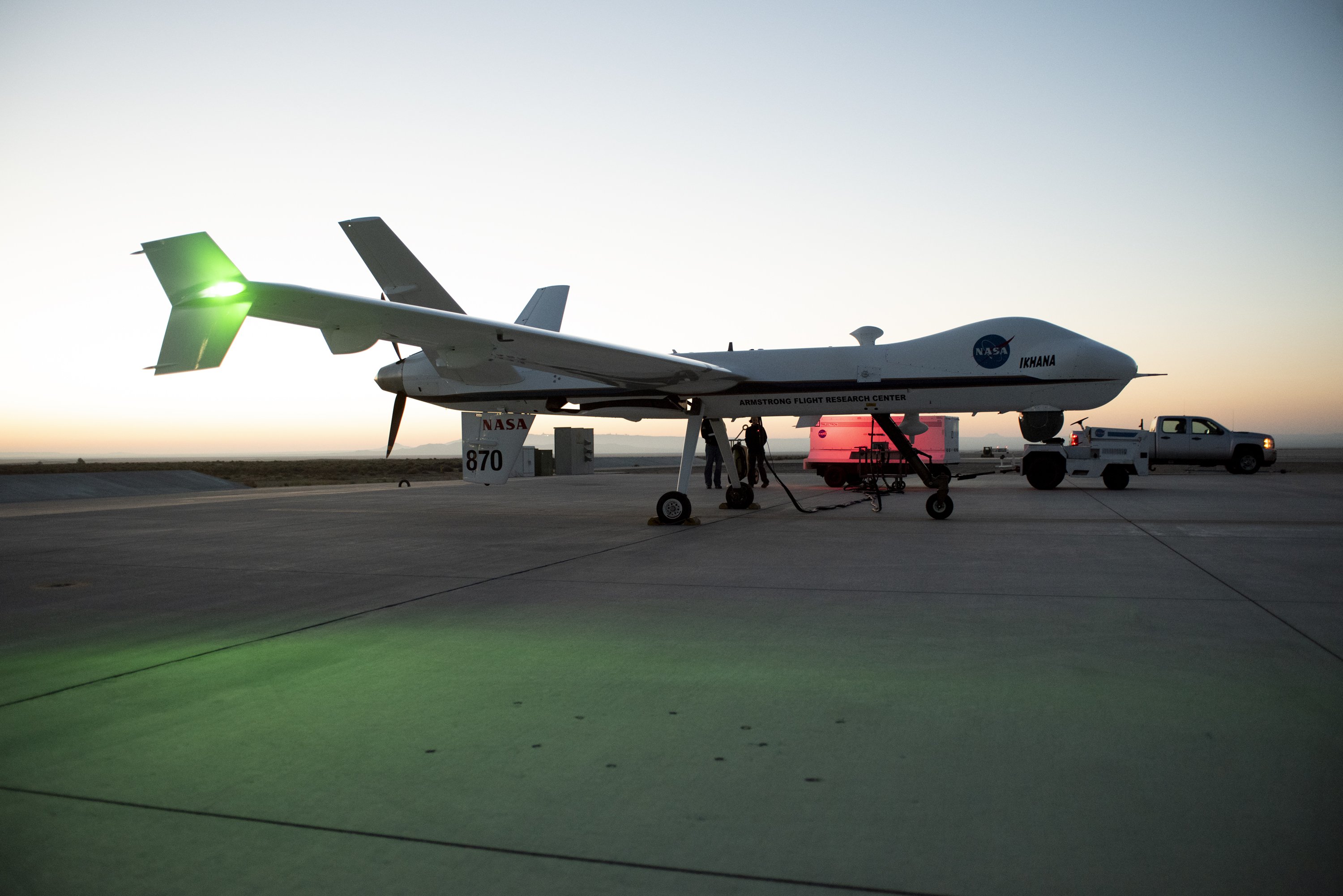 NASA’s remotely-piloted Ikhana aircraft, based at the agency’s Armstrong Flight Research Center in Edwards, California, successfully flew its first mission in the National Airspace System without a safety chase aircraft on Tuesday. This historic flight moves the United States one step closer to normalizing unmanned aircraft operations in the airspace used by commercial and private pilots.

Flying these large remotely-piloted aircraft over the United States opens the doors to all types of services, from monitoring and fighting forest fires, to providing new emergency search and rescue operations. The technology in this aircraft could, at some point, be scaled down for use in other general aviation aircraft.

“This is a huge milestone for our Unmanned Aircraft Systems Integration in the National Airspace System project team,” said Ed Waggoner, NASA’s Integrated Aviation Systems Program director. “We worked closely with our Federal Aviation Administration colleagues for several months to ensure we met all their requirements to make this initial flight happen.”

Flights of large craft like Ikhana, have traditionally required a safety chase aircraft to follow the unmanned aircraft as it travels through the same airspace used by commercial aircraft. The Ikhana flew in accordance with the Federal Aviation Administration’s (FAA) Technical Standard Order 211 — Detect and Avoid Systems — and Technical Standard Order 212 — Air-to-Air Radar for Traffic Surveillance.

The FAA granted NASA special permission to conduct this flight under the authority of a Certificate of Waiver or Authorization on March 30. The certificate permitted Ikhana’s pilot to rely on the latest Detect and Avoid technology, enabling the remote pilot on the ground to see and avoid other aircraft during the flight.

NASA successfully worked with its industry partners to develop a standard for Detect and Avoid technologies, complied with the requirements of the FAA Technical Standard Orders, and garnered flight approval from the FAA.

The Ikhana aircraft was equipped with detect and avoid technologies, including an airborne radar developed by General Atomics Aeronautical Systems, Inc., a Honeywell Traffic Alert and Collision Avoidance System, a Detect and Avoid Fusion Tracker, and an Automatic Dependent Surveillance-Broadcast capability – a surveillance technology where the aircraft determines its position via satellite navigation and periodically broadcasts this information so other aircraft can track it.

The flight took off from Edwards Air Force Base in California and entered controlled airspace almost immediately. Ikhana flew into the Class-A airspace, where commercial airliners fly, just west of Edwards at an altitude of about 20,000 feet. The aircraft then turned north toward Fresno, requiring air traffic control to be transferred from the Los Angeles Air Route Traffic Control Center to the Oakland Air Route Traffic Control Center. On the return trip, the pilot headed south toward Victorville, California, requiring communication control to be transferred back to Los Angeles.

During the return flight, the pilot began a gentle descent over the city of Tehachapi, California, into Class E airspace — about 10,000 feet — where general aviation pilots fly. The pilot initiated an approach into Victorville airport at 5,000 feet, coordinating in real time with air traffic controllers at the airport. After successfully executing all of these milestones, the aircraft exited the public airspace and returned to its base at Armstrong.

“We are flying with a suite of sophisticated technology that greatly enhances the safety capabilities of pilots flying large unmanned aircraft in the National Airspace System,” said Scott Howe, Armstrong test pilot. “We took the time to mitigate the risks and to ensure that we, as a program, were prepared for this flight.”

Tuesday’s flight was the first remotely-piloted aircraft to use airborne detect and avoid technology to meet the intent of the FAA’s “see and avoid” rules, with all test objectives successfully accomplished.