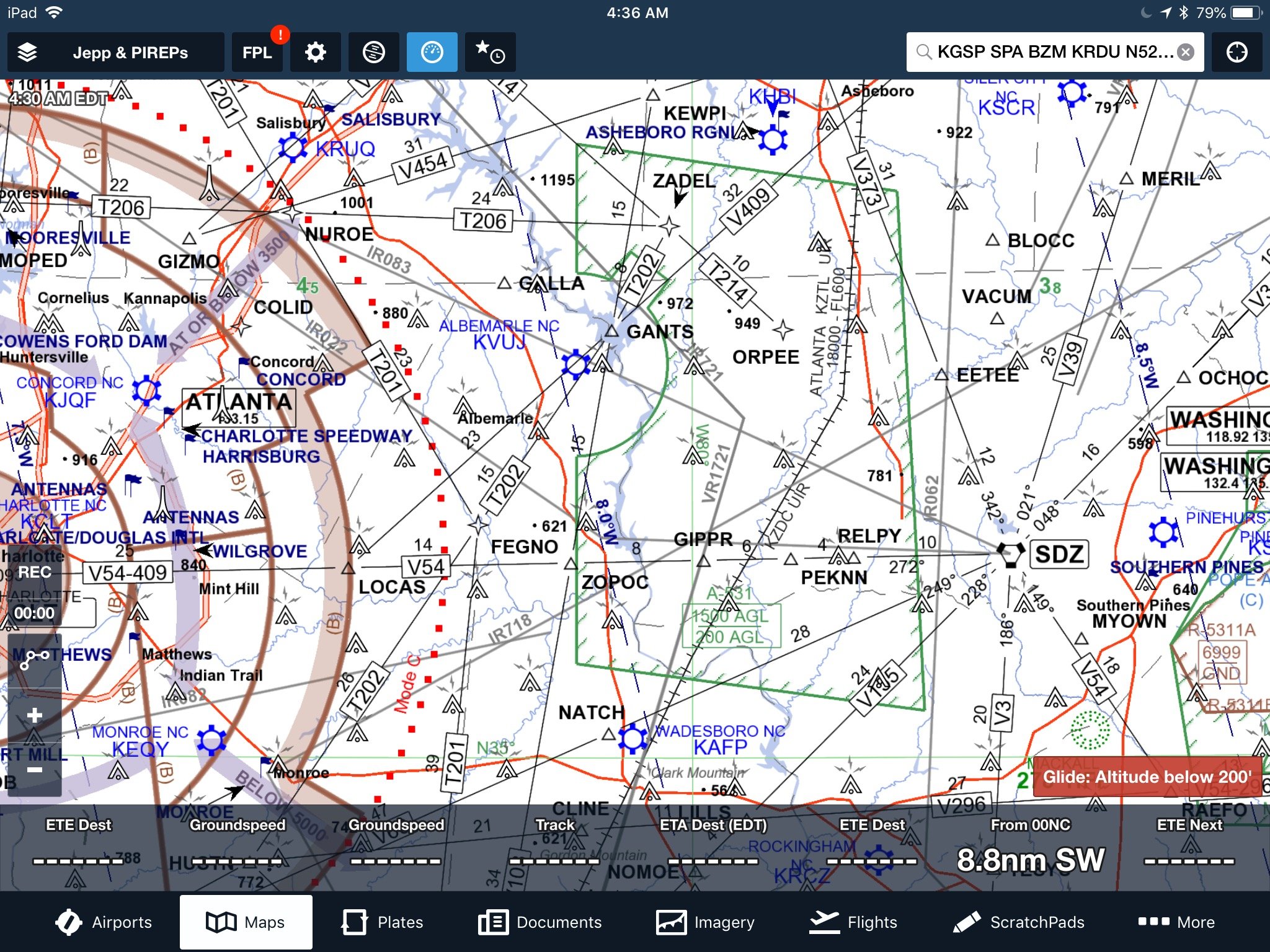 It seems like there is a never-ending series of issues to consider when you head out to fly your UAS or drone. You need to think about basic things like weather, battery health, and where you are going to fly.

Drone pilots who have completed their FAA Part 107 certification will have heard the warnings about flying near airports and other limited or prohibited areas. Certificated UAS pilots will have also had some familiarization with reading FAA aeronautical maps. A skill that dulls with the lack of use.

Hint: Every printed FAA map has a legend on it you can refer to when you forget what something means.

Recently I had experience that almost tripped me up and caused me to fly in an area that requires more vigilance than the average flight. It seems there was a military Alert area that extends down to 200’ AGL but you’d never know about it unless you did some research first. In this case, the special use airspace was in the middle of the national forest far from anyone.

How did I find myself in this situation? I’m a faculty member at the NC Public Safety Drone Academy and recently I was asked to teach a class at their location in Montgomery County, North Carolina.

Most of that lovely rural county is cascading woodlands in a remote setting that seems perfectly out of the way and safe to fly.

But many of those out of the way areas are not as innocent as you may assume. The airspace above can be an Alert area like I ran into, a Military Operations Area (MOA), Warning area, Prohibited area, Restricted area or even a Controlled Firing area (CFA). These areas of special use airspace are dotted all about and in places, you would least suspect.

MOAs are designated airspace used for military aircraft training and testing. It’s their designated box in the sky and theirs when they want to use it. And while the floor of some of those MOAs may end thousands of feet up, they can also sometimes run to the ground. While it may be legal to fly in a MOA under visual flight rules, that doesn’t mean it’s smart. My rule is if I’m cleared into a MOA on an instrument flight plan, I’ll fly through but if I’m flying the airplane VFR and a MOA is hot then I stay out.

That Montgomery County Alert area I mentioned is used for U.S. Army helicopter training from Fort Bragg so it is no surprise how low to the ground it actually goes.

In the picture below Montgomery County is outlined in red and the Alert area is defined by those magenta dashes. 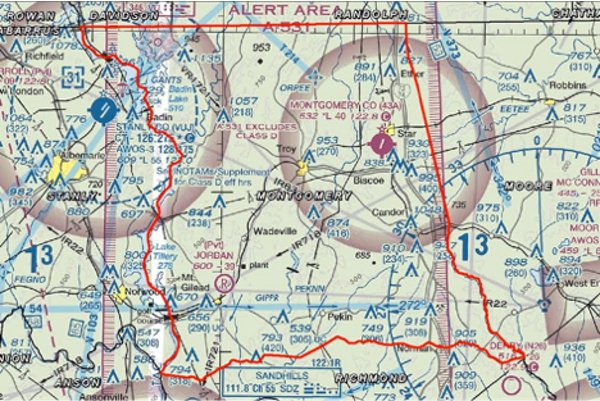 FAA smart apps like the B4UFLY are designed to give UAS pilots some warning about areas to avoid flying in. The FAA says, “B4UFLY is an easy-to-use smartphone app that helps unmanned aircraft operators determine whether there are any restrictions or requirements in effect at the location where they want to fly.” But it doesn’t show special use airspace you need to be aware of.

As an airplane pilot, I’m fortunate to have a number of aviation resources right on my smartphone. I love the ForeFlight application and so in a couple of taps, I can see the details on airspace issues over Montgomery County. Turns out it is Alert Area A-531 and ForeFlight tells me it extends down to 200’ above ground level (AGL). My sky above my UAS operations can be impacted when that Alert area is in use. The last thing a training Army helicopter pilot needs is me flying in their practice area when they are using it.

Area A-531 is listed as being active between 200’-1,500’ AGL and intermittently between 0600-2400, Monday-Friday and occasionally on weekends. Even if you don’t have an application like ForeFlight you can see a warning for that area on a printed FAA sectional map. The FAA Visual Flight Rules sectional map says “CAUTION: Extensive Military Helicopter Training 200’ AGL to 1500’ AGL.” According to the FAA, “Only those activities that do not pose a hazard to other aircraft may be conducted in an alert area.”

Even Using ForeFlight, Discovering Reality Can be Elusive

Using ForeFlight you can look at a variety of VFR aviation charts. They each give you different information. I have a favorite map I use but it is really dependent on the type of operations I’m flying. 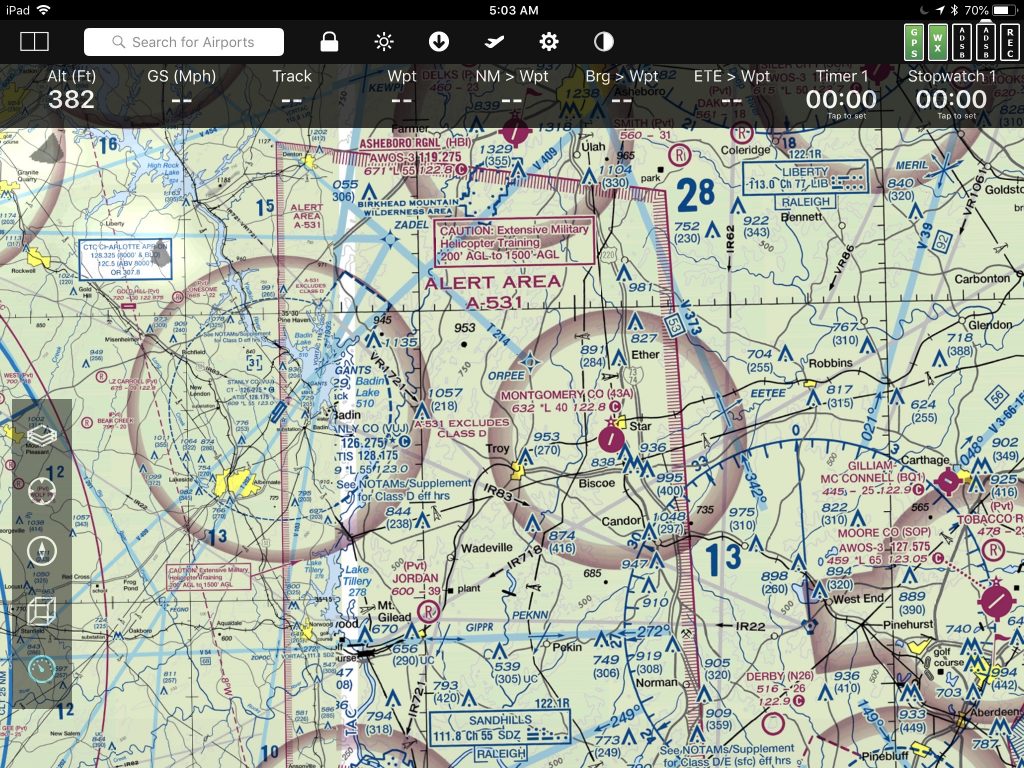 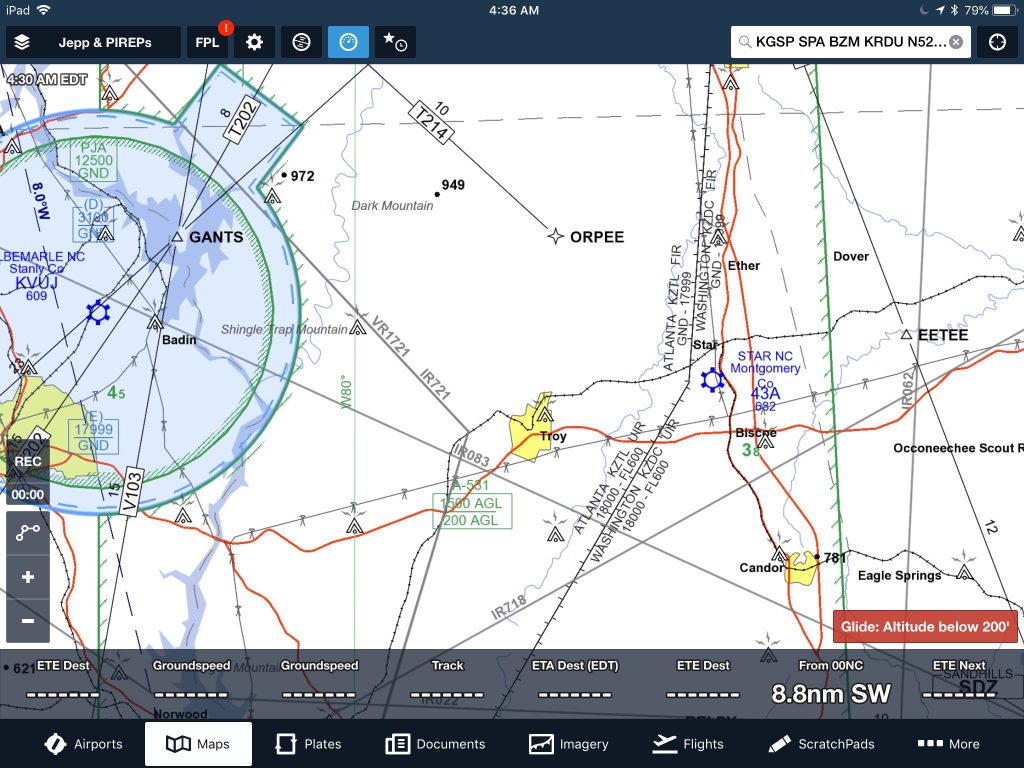 The ForeFlight Aeronautical Map with Terain 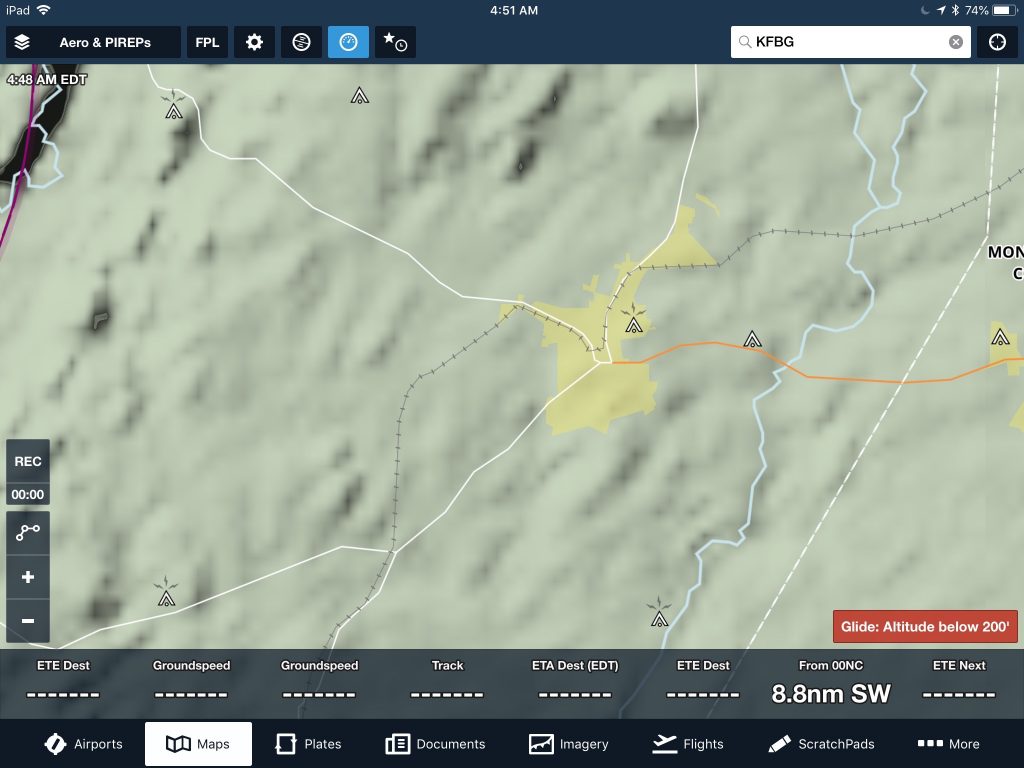 But even with what I think is the best tool for aircraft pilot awareness and information, finding the right answers can be tricky.

Using a plan view of a flightpath across the county I can see area A-531 extends down to nearly the ground. 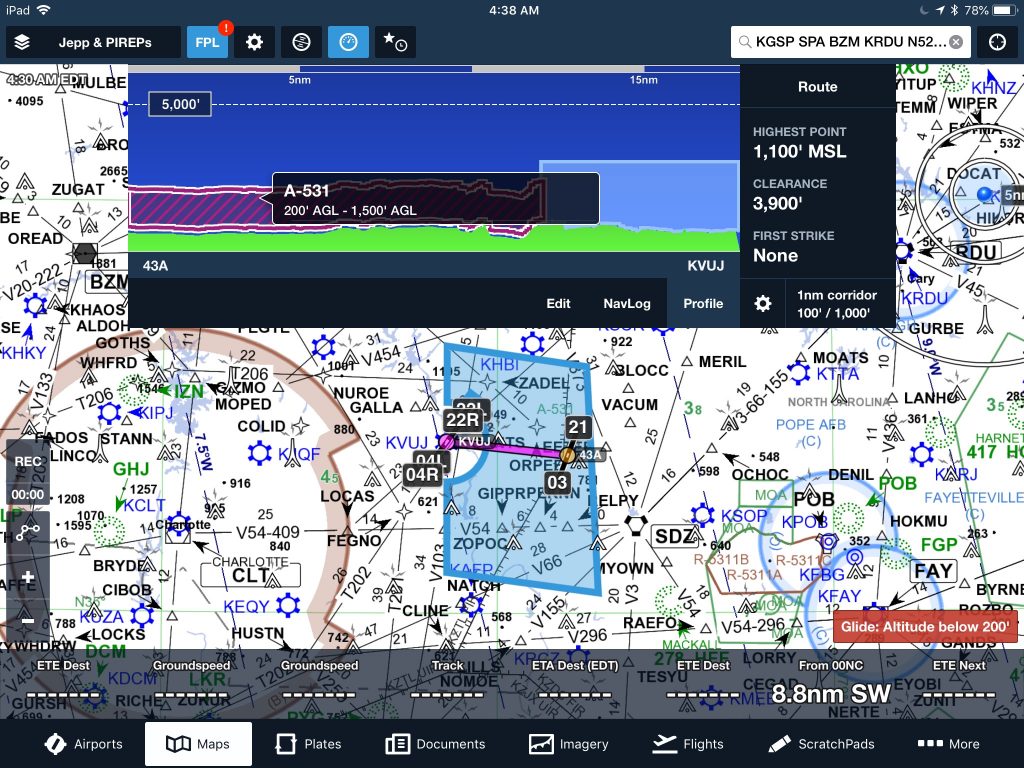 That leaves me concerned. If I click on the A-531 area on the map I can learn more about the operations of the area. 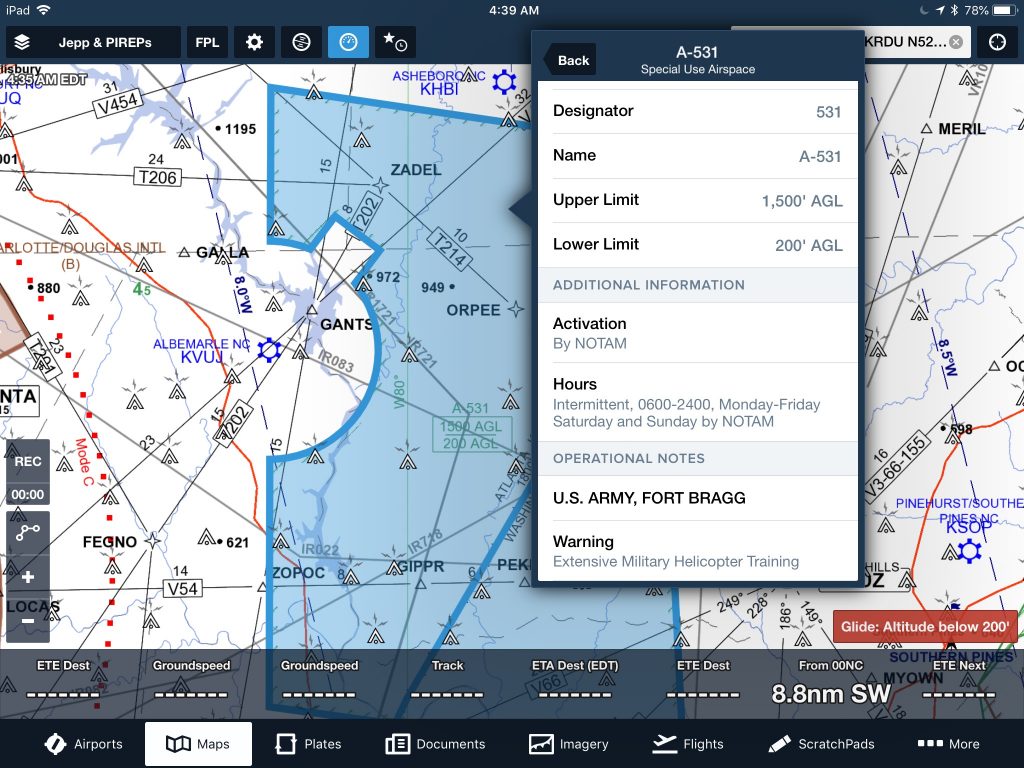 I can see the operational notes say Fort Bragg is responsible for the area. But looking under the Fort Bragg airport for additional information tells me nothing useful.

The only way I can find to uncover operations in the area is to look at the NOTAMs listed under the nearby Mackall AAF base (KHFF). That is where you find the information you absolutely need. 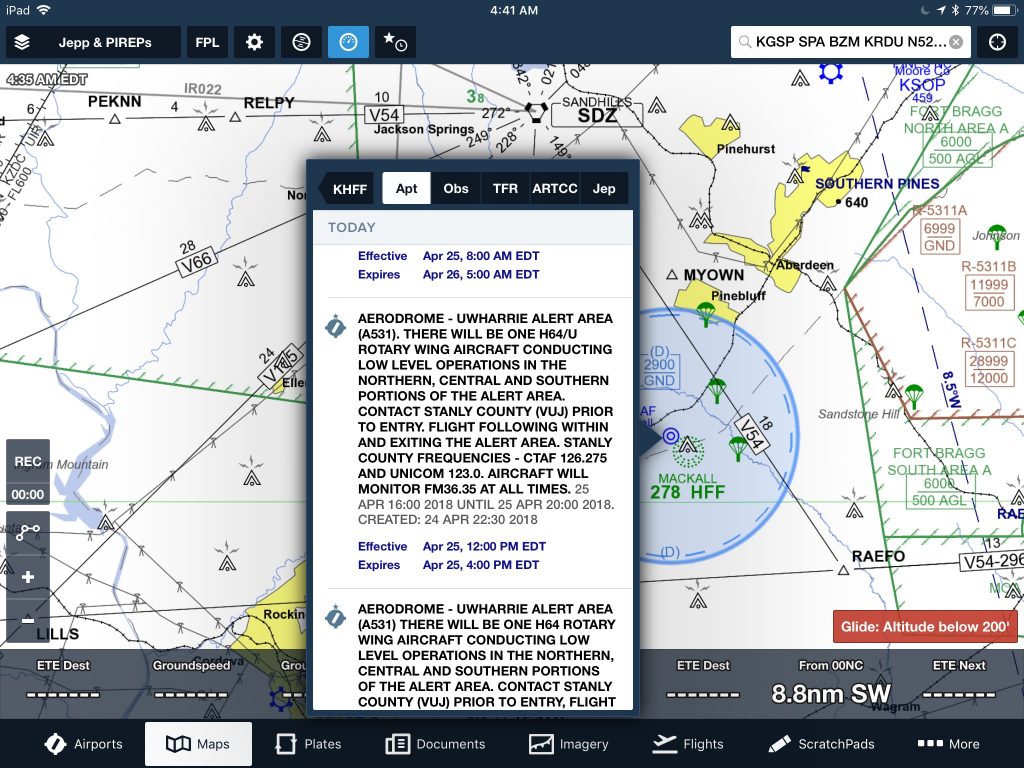 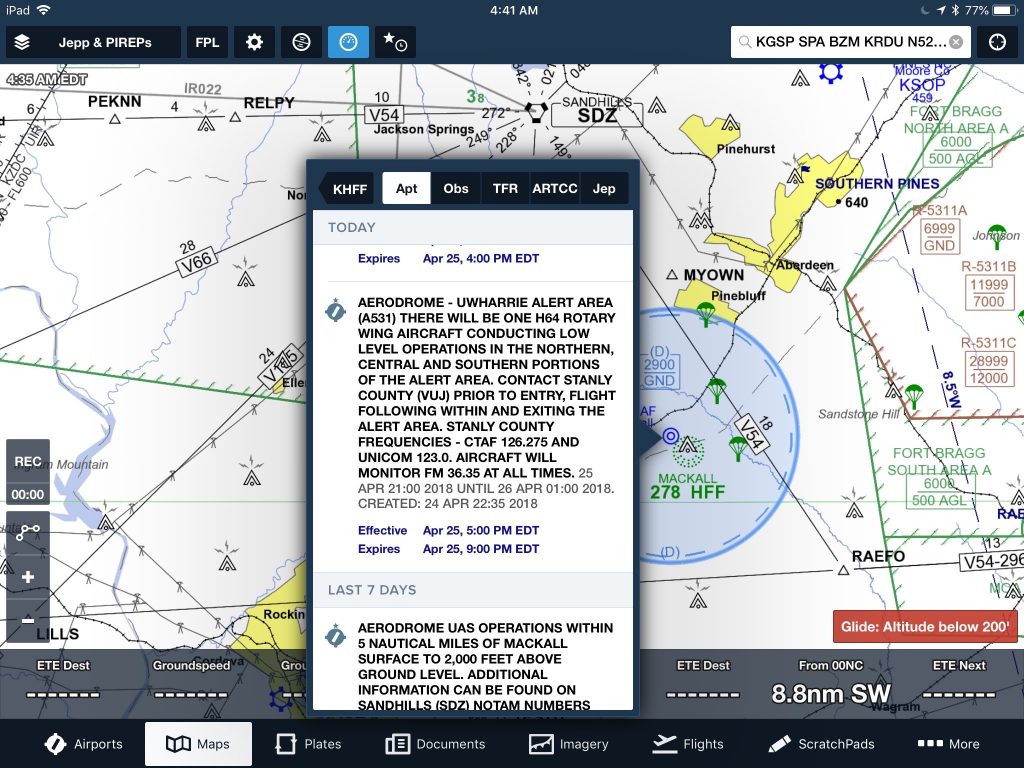 If the FAA is going to consider a UAS/drone pilot as a pilot flying an aircraft, there will be no excuse for you not knowing the airspace you are either flying in or plan to fly in.

Bonus: ForeFlight Does a Great Job with Weather Information

ForeFlight weather is my go to resource for aviation weather. The specific information I need to plan flights is all available in the application. 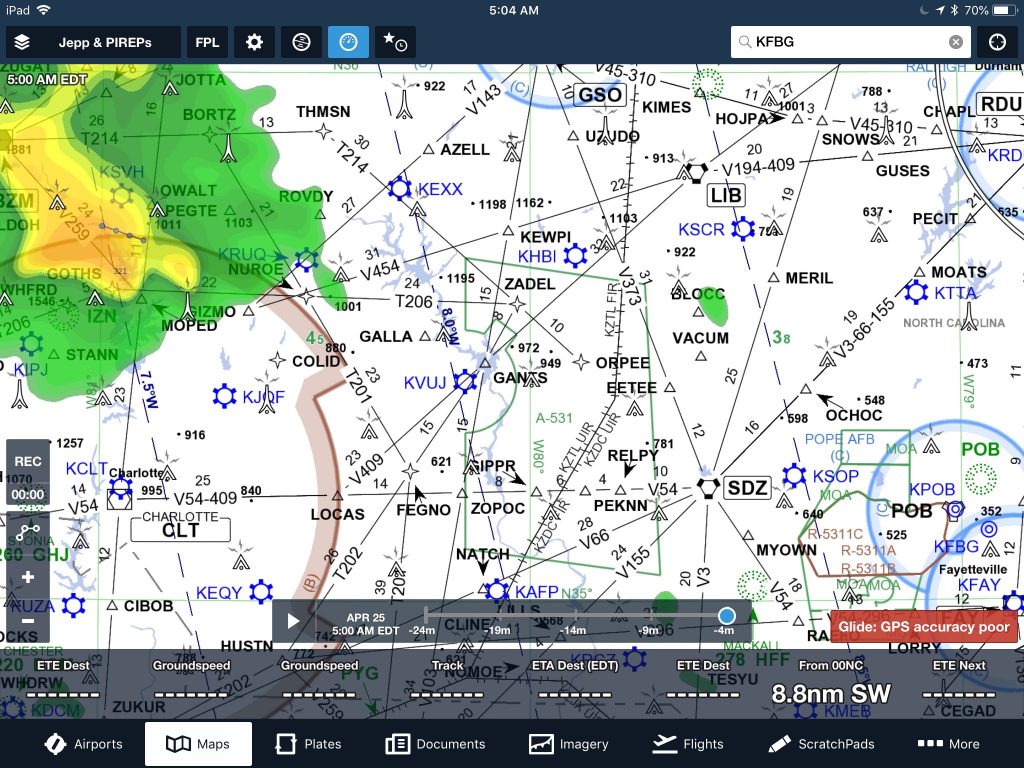 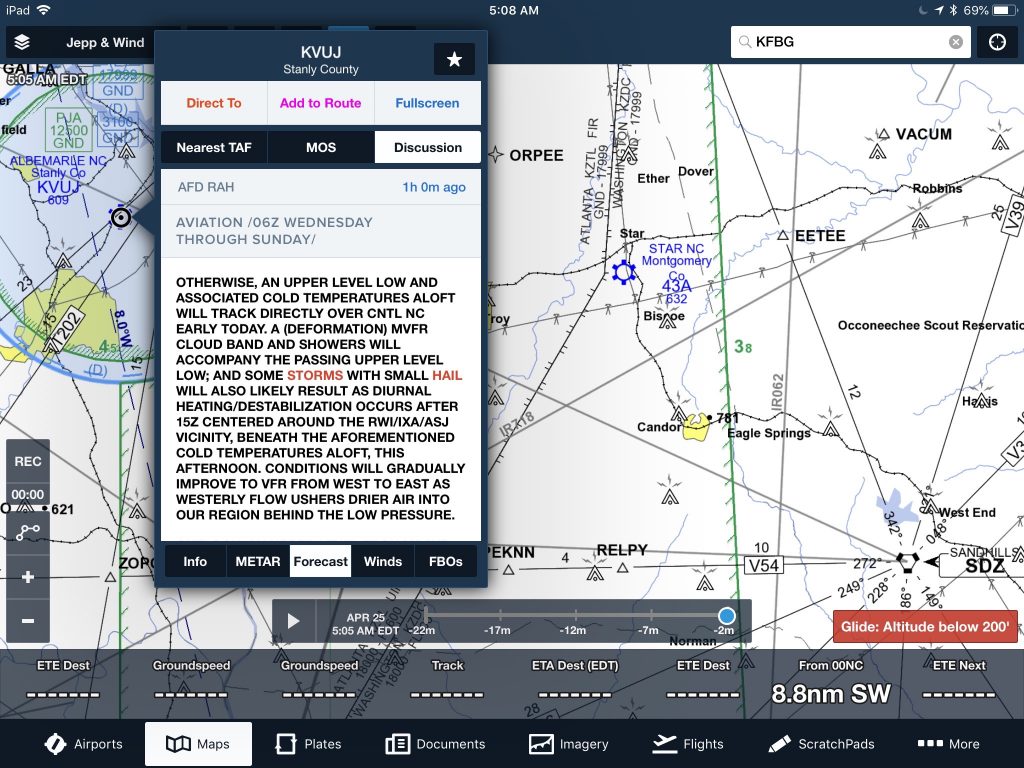 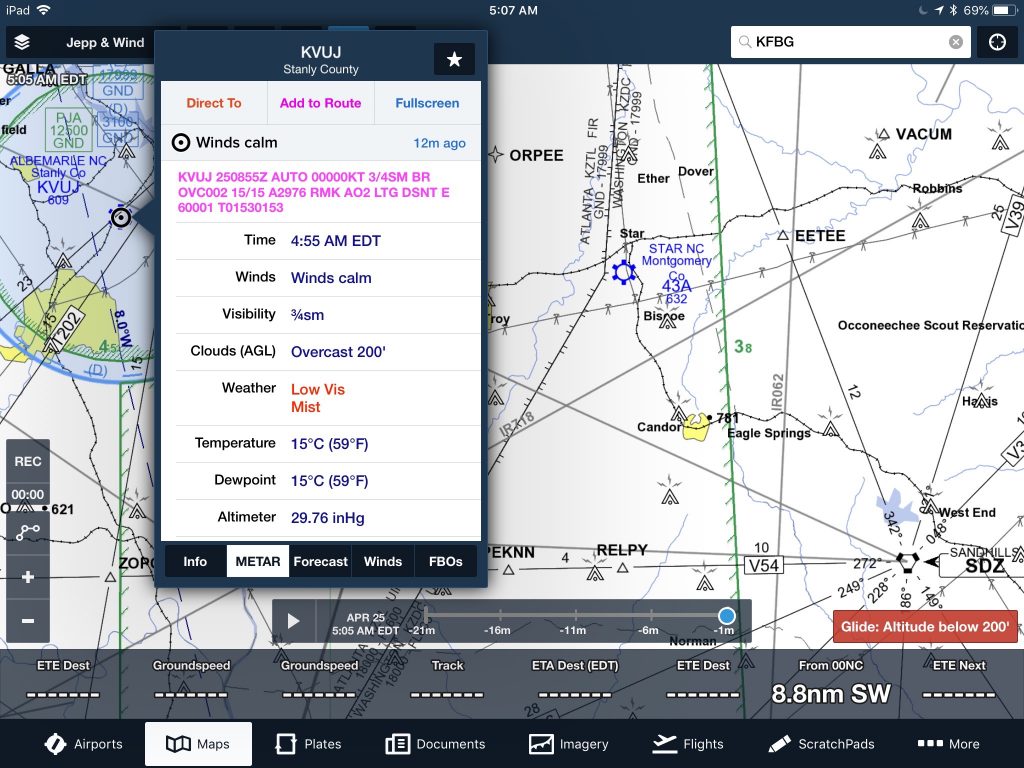 A Free but Less Authoritative Way to Check Airspace

One way to check on many active operational special use areas is to visit the FAA SUA web site.

The FAA SUA website will show you which flight restricted areas as active at the moment. Unfortunately, it does not give you details on all special use airspace areas that may be in use, like the Alert area I mentioned. But knowing from the A-531 Alert area only goes down to 2atGL at least I know I can always safely operate at that altitude unless I can positively confirm the Alert area is cold.

There are a few free online sites where you can see if there are special use airspace in the area you plan to fly. You can look at FAA.gov, vfrmap.com or skyvector.com.

Here is the bottom line, while your UAS flight may not be strictly prohibited, drone pilots should make damn sure they are not going to interfere with operations in those areas. If they are active and/or hot to make sure the UAS flight doesn’t end in an unfortunate airspace violation or worse.