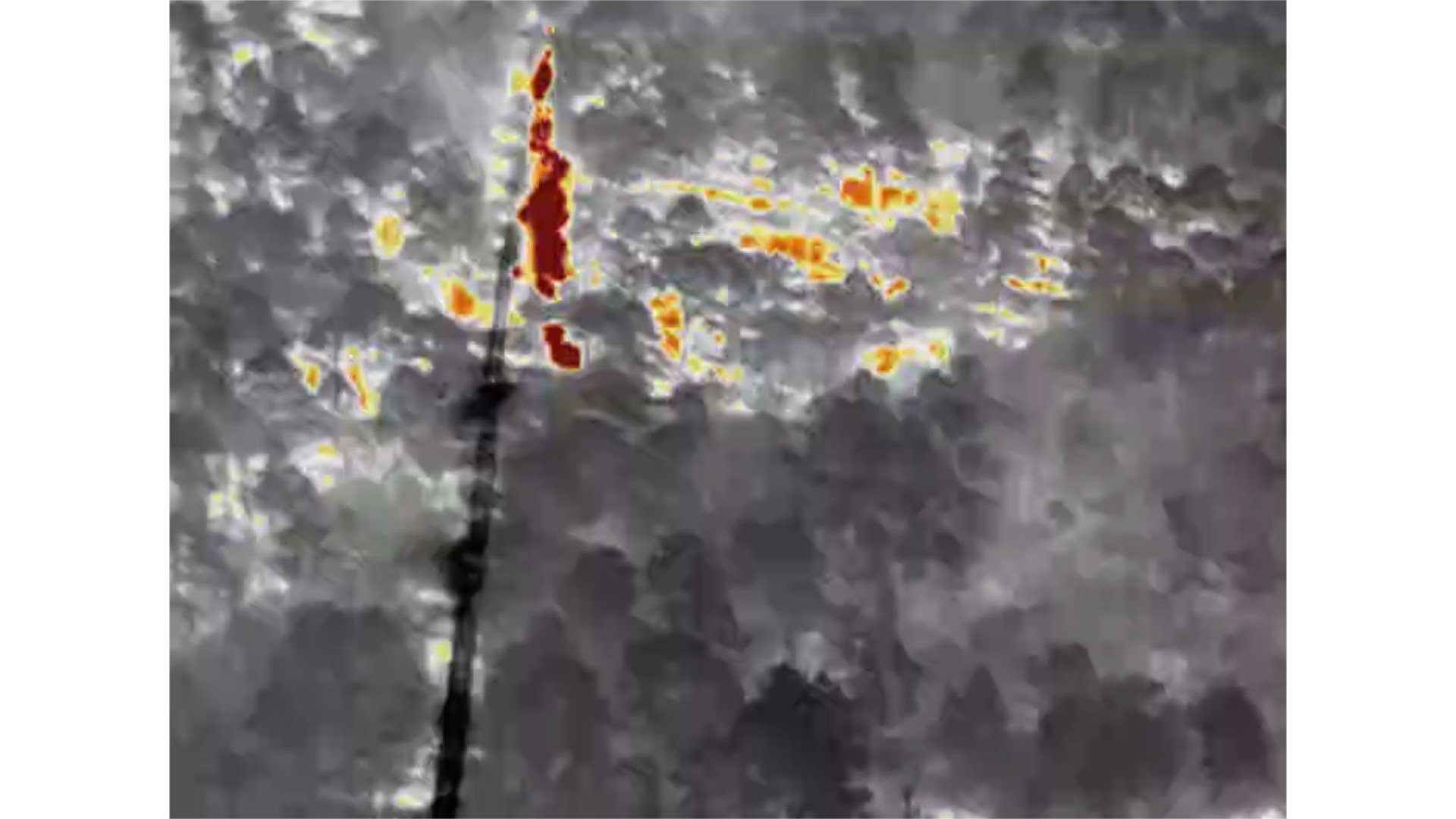 Chief Ed Barrett accompanied Chief Pilot Steve Rhode to Hoffman, NC for a controlled burn of 250 acres. The purpose of the exercise and training was to evaluate how the drone handled different parts of a wildfire. 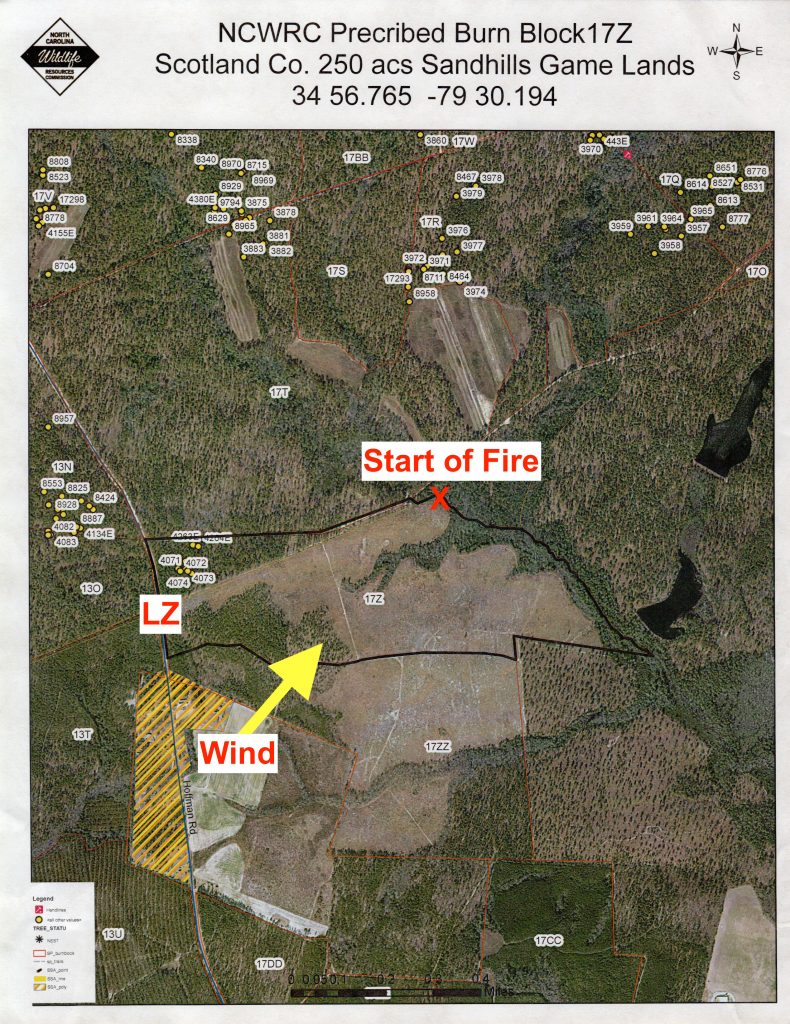 This controller screenshot shows a better representation of the state of the forest on the day we visited and our LZ as identified by the H. 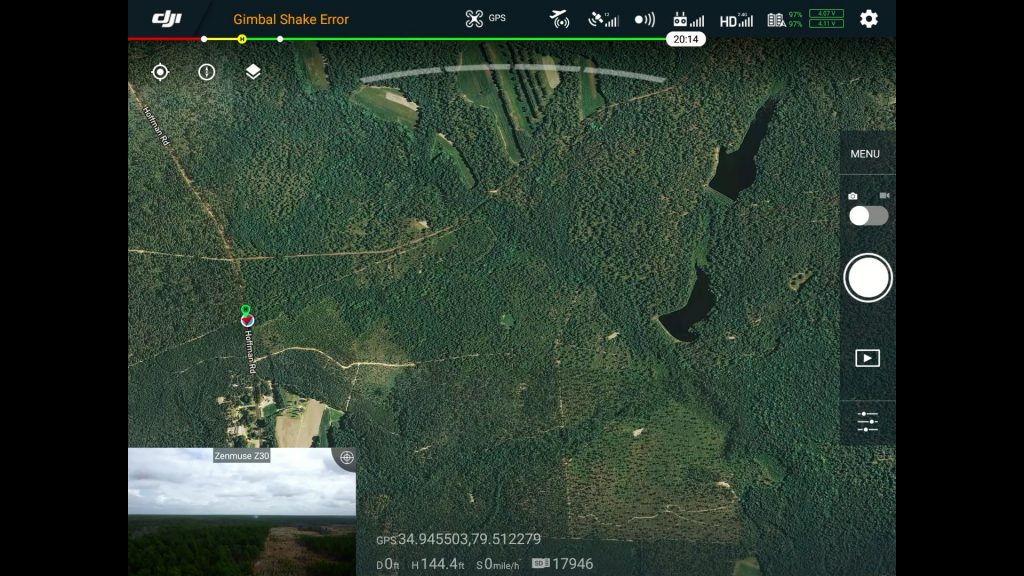 The smoke from the start of the fire was visible almost immediately.

By observing the smoke it was clear what direction the wind would take the fire.

However, crews had started the fire along a defined break surrounding the block to be burned so it would create a buffer for the fire once it began to advance from the head which would be around the area of the yellow arrowhead. That part of the fire was to be ignited later.

Crews developed the fire so it would burn safely into the black and could be easily contained.

As mentioned, the thermal start of the fire was easily visualized, as shown below. 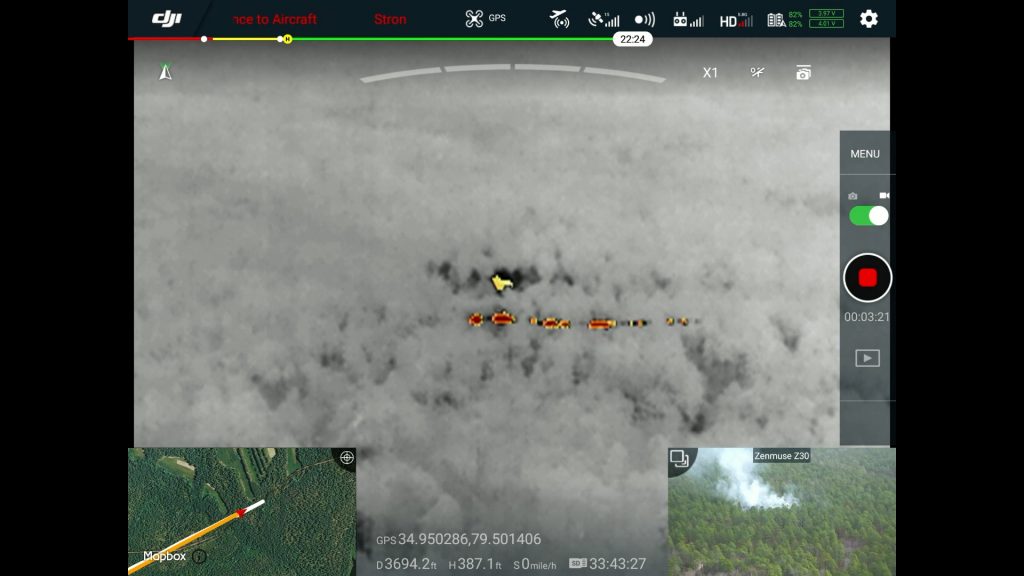 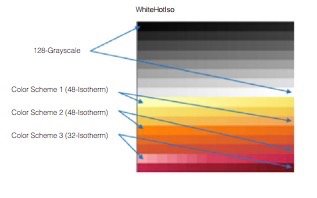 The start of the fire from the visual camera. 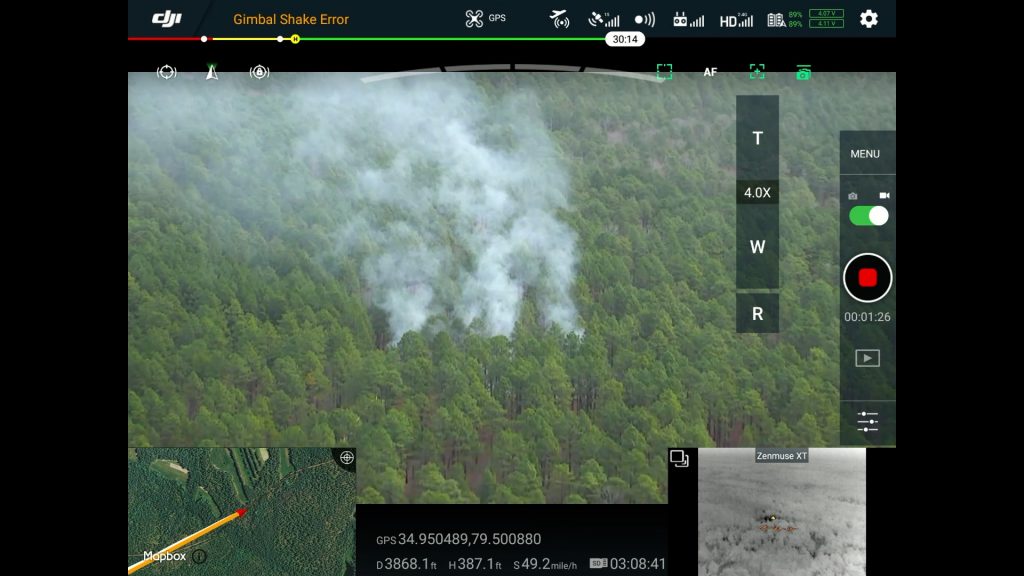 As crews moved along the back line and ignited the fire, it was easy to see and record that activity. 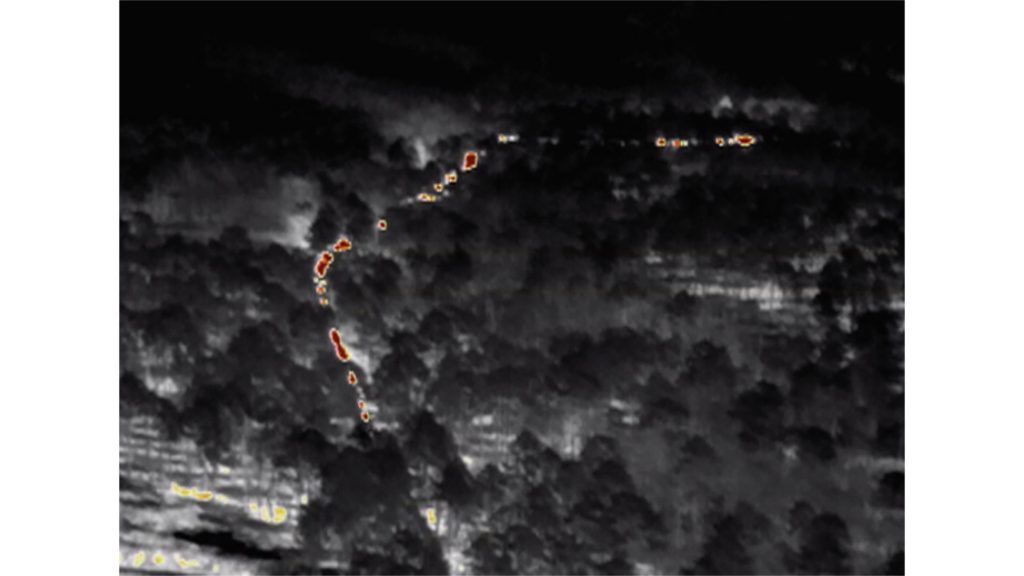 From a very safe distance away the visual camera was able to find and follow ground crews involved in the fire. 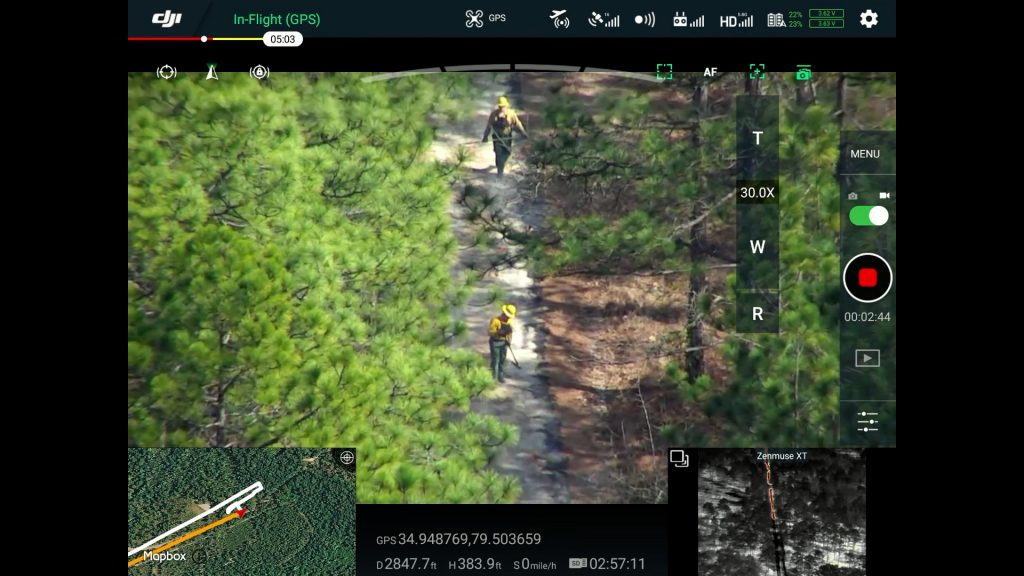 As the fire warmed up the vehicles near the fire were able to be easily spotted on the thermal camera. 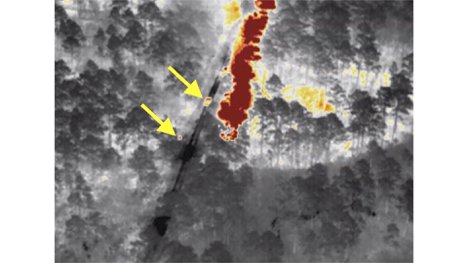 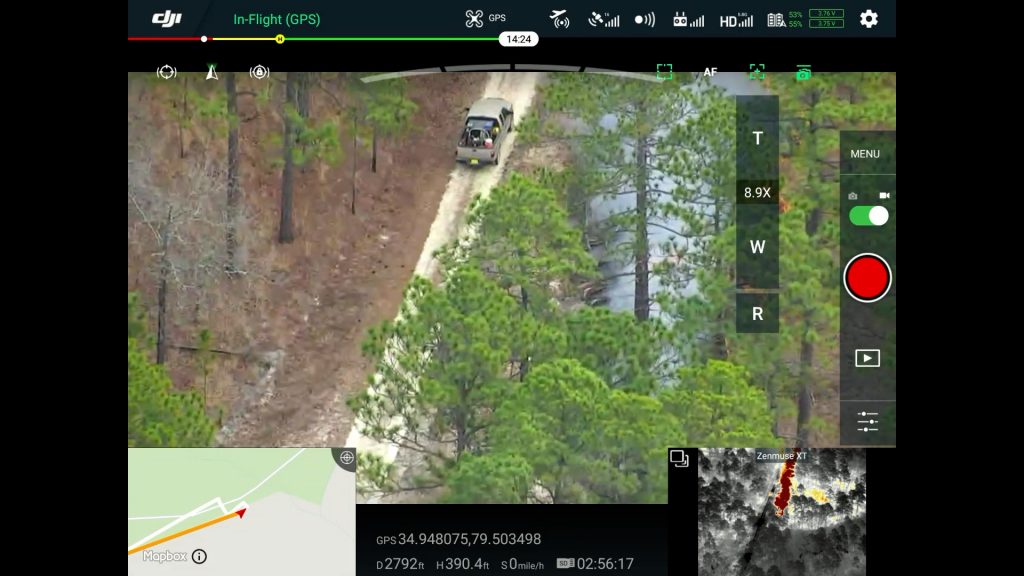 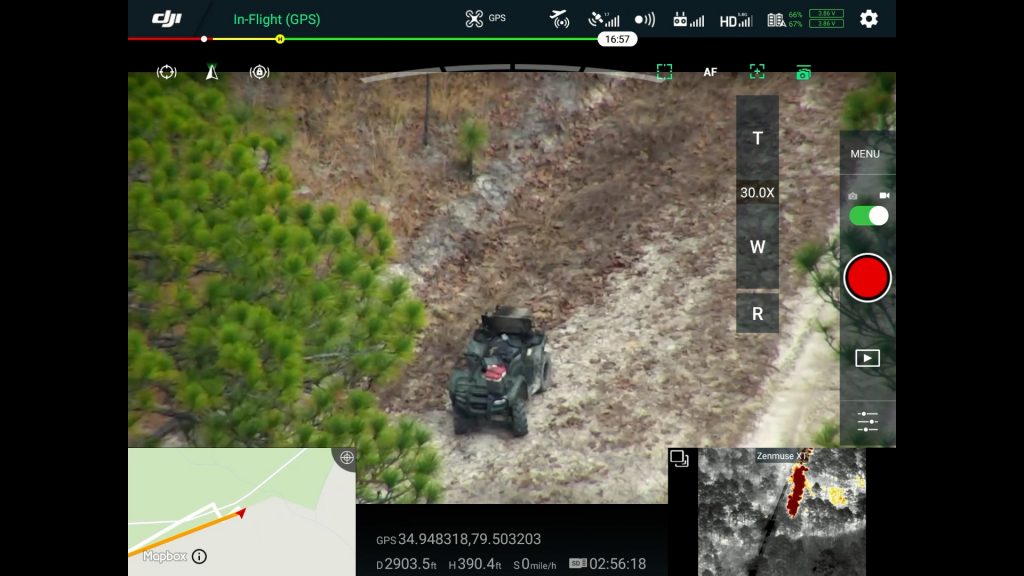 We were able to test the temperature readings on the FLIR spot meter and determine which was the hot side of the fire. At night this would give us an indication of the movement of the fire and it would be much easier to map the head.

As you can see below, behind the direction of the fire, with the wind at its back, the fire was 82.4 F near the edge. 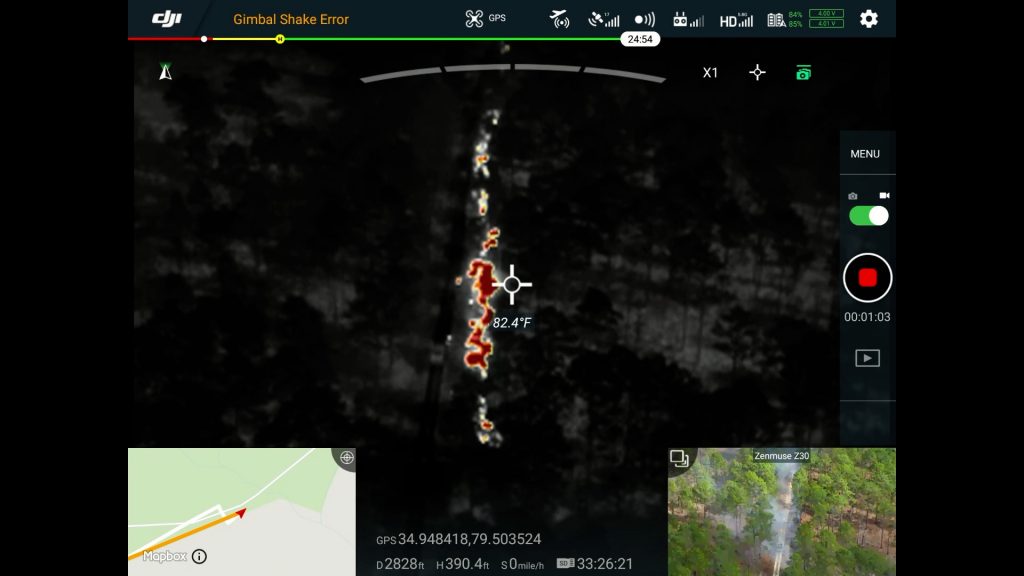 In the center of that line of the fire the temperature registered as 343 F. 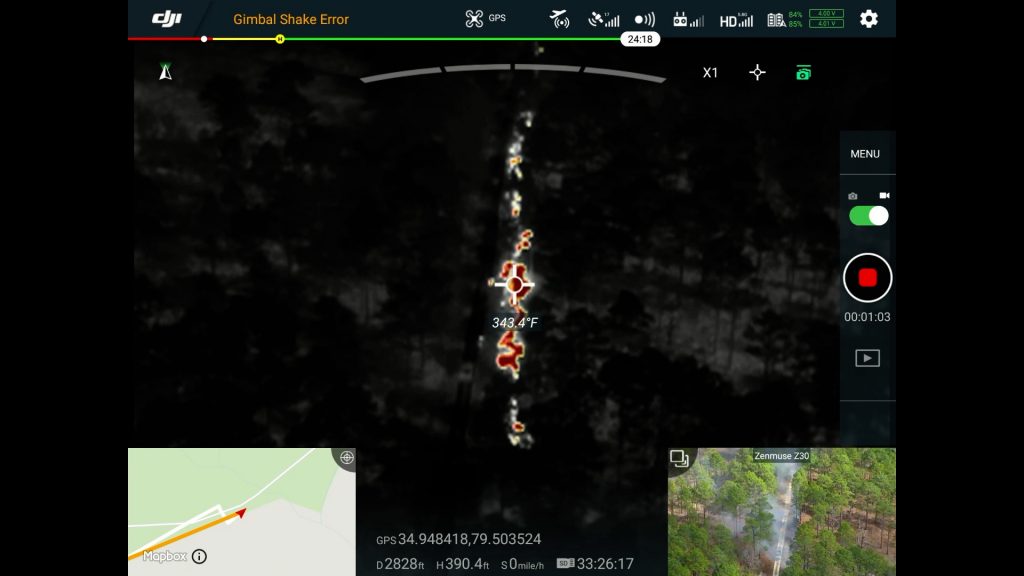 On the upwind side of the fire line, the temperature was 113 F. 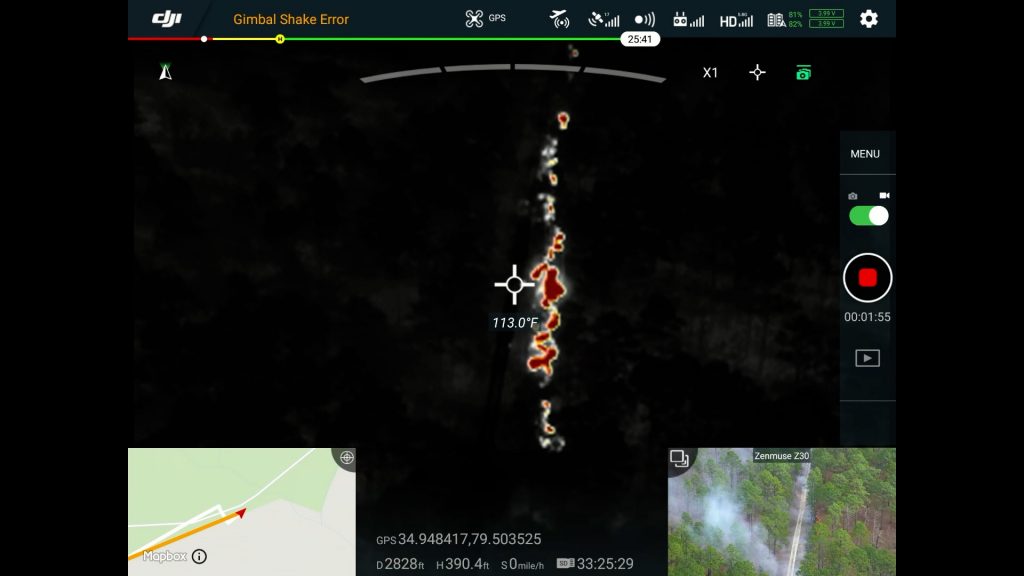 The wind was blowing the radiant heat ahead of the fire.

Chief Barrett and I felt confident given a nighttime wildfire that using this learned lesson that we could accurately predict the direction of travel with no visual clues. 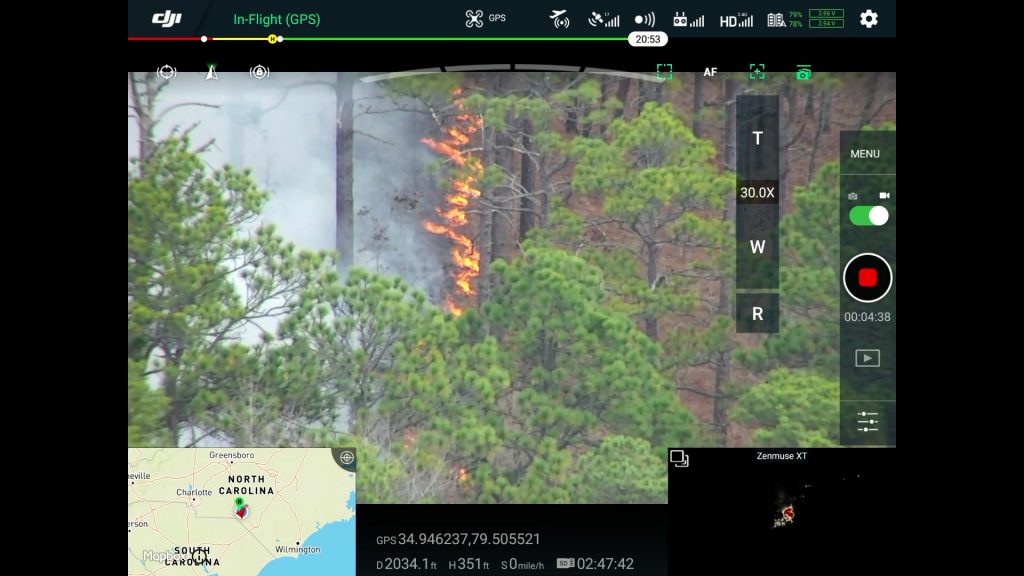 As the fire moved away from the back line towards the location of fuel to help support it the thermal camera was able to show the hotter front line of the fire with the warmer areas behind that line. Most of the ground fuel was pine needles but there were sections that were heavy with damp layers of oak leaves. 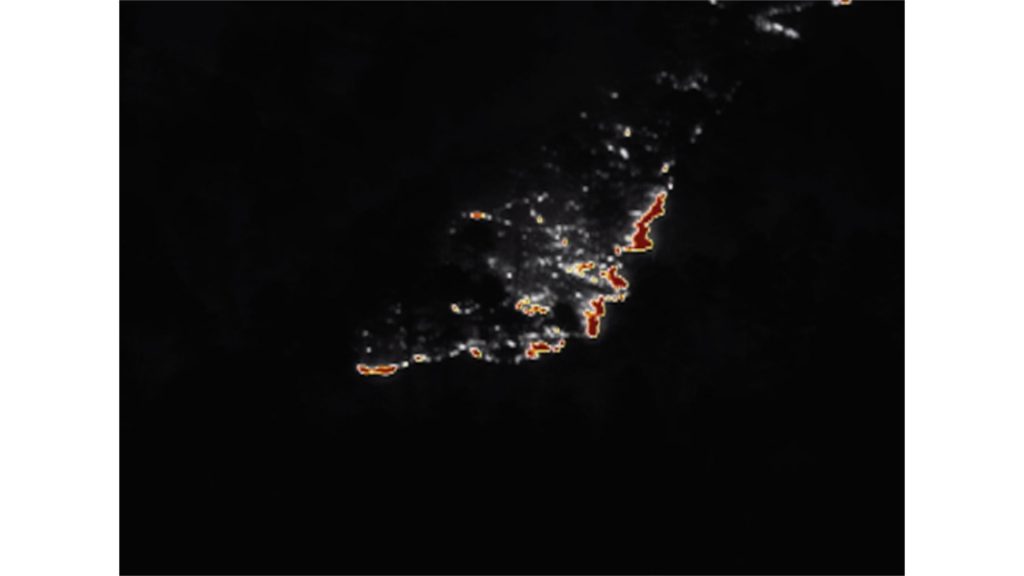 It is important to keep in mind this fire was set in such a way that would not be found in a wildland fire.

In that type of fire, the head would be the portion advancing, followed by a right and left flanks, and the back of the fire would not be advancing.

The Landing Zone was carefully selected to put us in the highest position, with the least amount of tree growth interference. Even with the selected LZ, the maximum controllable flight distance was about 3,300 feet from the LZ. There appeared to be some radio interference in that general area.

The need to consider a safe evacuation route for the LZ in case of wind shift needed to be considered as well. We had two directions to exit.

With wildland fires, the pilot should prepare for an extended scene time and should make sure the vehicle is carrying food and water supplies.

A couple of chairs to sit in would have been a big benefit on such a long event.

We essentially had no radio communication with the fire crew in the woods. We learned they were not on the viper network as the NC Forestry Service is.

Next time I would adjust the gain of the thermal camera manually. With the camera set on auto, it would significantly reduce the detail in the area around the fire. Here is an example.

When looking directly at the developing hot fire the surrounding area would blacken out. 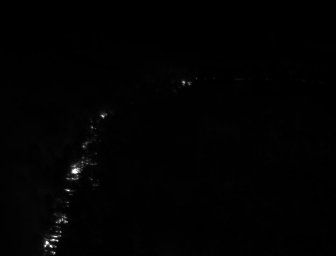 Questions? Feedback? Send Me a Message