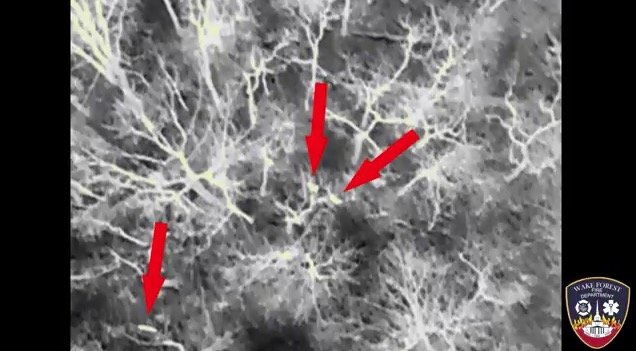 A big thank you to the Wake Forest Fire Department who I’m with for their willingness to allow me to share some of our flight debriefs for educational purposes.

At 1823 I received a call from the Wake Forest Police Department for a request for service in conjunction with the Wake Sheriff’s Office. The call was regarding two missing girls approximately 11-years-old. Allegedly they were named [ ] and [ ]. The 911 call from one of the girls was received by Franklin County 911 and the call was dropped when a transfer to Wake County was attempted.

At 1827 I contacted Central and opened an incident number. I then called Chief Early and informed him of the mutual aid request.

The phone number of the caller was pinged and a hit was received near the entrance to the driveway of the location of our initial search area. It was later found out that a half hour earlier than the call a passing motorist had observed two girls walking along [ ] Road near the same location.

We were able to set up a landing zone 1 (LZ1) on the private property of a homeowner located on [ ] Drive. Battalion Chief Strawbridge met me at the LZ and we coordinated activities.

After a discussion with members of the Wake Forest Police Department and Wake Sheriff’s Office, it was decided we would first launch the drone with the megaphone and instruct the missing girls to call 911 again. It was determined the mobile phone the call came from was only 911 enabled and would not receive any incoming calls. There was no 911 call initiated from our efforts.

Before takeoff, the FLIR XT camera was set for human body istotherm identification. You can see my settings here.

Multiple targets were identified as deer in the woods and sewer access points.

The Wake County Sheriff called the State Highway Patrol and requested a helicopter to come and search but the SHP helicopter was not available.

To the right of the driveway where we had searched the Wake Sheriff Office had a K-9 officer search the wooded area. The officer reported no indications of a hit except near the house where the homeowners had recently returned to and along a power line easement where a WFPD officer has been walking.

I then searched the wooded area to the right of the driveway where the K-9 team had been searching.

We then relocated to LZ2 at [ ] Ave where I flew a search around a nearby pond and then a return flight over the neighborhood to the house we had previously searched. No targets were spotted other than multiple possible deer.

At 2034 the decision as made to call off the search.

The drone was able to fly a number of sorties and the FLIR camera operated well and detected a number of targets on the ground which turned out to be deer and sewer access points. Humans and involved vehicles were easily distinguished as well.

We were able to carry the megaphone setup and broadcast messages to ask missing girls to call 911 again.

A safe landing zone was established at two locations. There were no incidents at the LZ.

We established a number of new relationships with the Wake Sheriff’s Office and demonstrated the UAS to additional Wake Forest PD officers.

We communicated well with the Wake Sheriff Office Sergeant on the scene who was the commander. We collaboratively made decisions and came up with a search plan and executed it.

Directives and search planning was performed in a forward-thinking way to move resources to take some action instead of standing around.

What Did Not Go Optimally:

Police and deputies on the scene were not prepared to go and search GPS targets. While we did issue GPS coordinates to one officer, feedback was slow to come back regarding results. More fire department resources on the ground would have been beneficial for an organized and coordinated attack.

There were a large number of deer in the woods that moved often in pairs, just like the two girls we were looking for. It was hard to distinguish the deer from humans until they began to move. Sending search personnel into the woods to look for deer targets would not have been effective since the deer were frequently on the move. However, if we had stationed searchers into the woods proactively we could have then quickly routed them to targets in their quadrant.

The radio to broadcast over the megaphone was given to an officer and he was instructed to regularly broadcast the message for the girls to call 911. I think that happened no more than a couple of times. This led to a reduction in battery life while we were carrying the heavier megaphone payload without much use of it.

There were issues with live streaming of the video. Part of the problem appears to be Verizon wireless issues. Speed testing of our hotspot feed indicated very poor transmission speeds which could lead to poor video quality over the internet. It was subsequently learned that even though we have an unlimited public service Verizon hot spot, Verizon had speed limited our hotspot after exceeding 25 GB of use for the month.

Even with Battalion 1 at the scene, there were still issues with keeping people off the pilot and allowing Battalion 1 to focus on his job.

What I Could Have Done Better as the Pilot:

Two sets of larger batteries generated battery error messages and were unable to be used. Following the recent update of software on the UAS the day before it is unclear if the pair of new batteries or a pair of old batteries was giving what appeared to be a software induced error. It is easily dealt with by running the batteries through an update process which will be completed today.

I could have been more directive to scene officers and worked with the Battalion Chief to give them more assignments to conduct searches. However, it was unclear to me at the time who was with what department.

I did not do an optimum job of assigning many GPS coordinates to search because of confusion of whom I could direct to go do that and where the searchers had already been sent.

I could have remembered to adjust FLIR contrast more depending on conditions on the ground.

If you have any questions about this, you can reach me using the form below.