In just a few years, civilian drone technology has revolutionized a wide range of pursuits – from adventure photography and filmmaking to agriculture, construction, science, infrastructure inspection and more. Unmanned aircraft systems (UAS) allow people to accomplish tasks faster, more efficiently, at a lower cost, and in many cases more safely than in the past.

Yet the most consequential use of drones may be to save and protect human life. For firefighters, rescue squads and search operations, drones offer an unprecedented way to quickly find missing people with traditional cameras or thermal imaging sensors, as well as to bring them emergency supplies such as water, life jackets, medicine and rescue ropes. Drones also can also provide an eye in the sky to monitor and protect rescue personnel during fires and operations without exposing them to danger, and narrow the area where human searchers need to put themselves at risk, speeding up the rescue effort and increasing the odds of survival.

All of these scenarios have occurred in real life in recent years, as rescue crews have obtained professional UAS gear and started putting it to use – or in some cases, have relied on bystanders’ drones to help them in emergencies. Yet until now, there has been no comprehensive summary of how often drones have been put to work in emergency situations.

To better understand these uses, DJI has searched news media reports from around the globe to generate the first list of lives saved with assistance from drones. The conclusions are significant:

A full list of these 18 incidents is presented in the table below. DJI chose these cases conservatively, selecting only those in which media accounts clearly demonstrated that people in imminent peril were directly located, assisted and/or rescued with drones.

These include people caught amid raging floodwaters, whose rescue ropes and life jackets were delivered by drone; people lost in snowbanks, fields and swamps until they were discovered by drone; and stranded hikers who were found by drone. 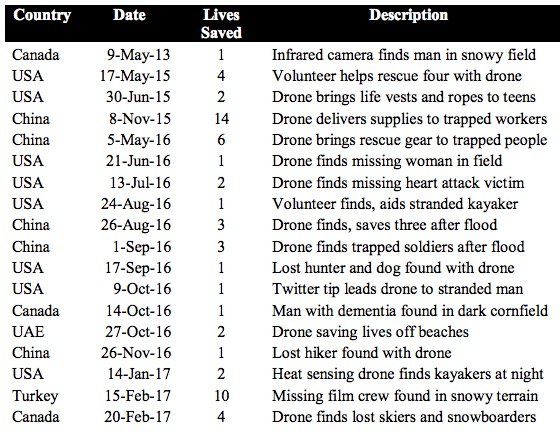 This count does not include many other reported incidents in which drones indirectly helped save lives by taking part in successful searches for missing people. In some cases such as this one, drones narrowed the search zone so ground-based rescuers could find victims in a smaller area; in other cases such as this one, media accounts are unclear whether victims were found by drones or by other means.

Of particular note is a devastating series of floods in early December, 2015 in India, where various media accounts claim dozens of families, and up to 200 individuals, were spotted and rescued by drones. We have excluded these lives from our overall total because no definitive count is available, but it seems certain from reports such as this and this that drones played a substantial role in lifesaving rescues there.

To qualify for our count, a news report was required to indicate that (1) a person was in a state of danger that could imperil his or her life, including situations involving floods, fires, missing people, exposure to extreme weather, or other hazardous environments; and (2) that a drone operation played a material role in returning that person to an environment of personal safety. Our method likely undercounts the number of times drones have helped save a life, due to underreporting of the tools used in emergency operations, as well as challenges in searching news reports across multiple languages. With one life a week being saved by drones on average, we expect additional examples will arise in countries all over the world.

This survey is an initial attempt to quantify how many lives have been saved by drones, and DJI welcomes additional efforts to refine this count and identify additional examples of drones being used to save lives directly or indirectly.

Search and Rescue: A deeper analysis

Search and rescue may well emerge as the most effective use of lifesaving drones. A recent research study DJI undertook with Ireland’s Donegal Mountain Search and Rescue found that a five-person rescue team needs two hours on average to find a victim in a one square kilometer area, but a drone can find a victim in that area in 20 minutes – six times quicker. Furthermore, the drone can relay back live images of the scene ensuring that the rescue operation can be planned to reduce the risk to rescuers’ own lives.

First responders have discovered that drones serve a valuable function to keep rescue personnel safe during emergency operations, by providing aerial views, pinpointing access routes or entering hazardous situations. They offer an eye in the sky- the best view for an overall perspective of any situation – and allow responders to plan for the best course of action without putting human lives at risk. Three years ago in Connecticut, firefighters used a volunteer’s drone to determine that a quarry fire was far enough from stored explosives to safely send in rescue personnel, while Minnesota firefighters last year used a drone to remotely monitor a propane tank in danger of exploding. In Iceland last year, rescue crews flew a drone to find safe routes up a mountain to reach two stranded hikers and escort them down. It is of course impossible to document the number of emergency responders who avoid injury thanks to drone technology, but the rapid adoption of UAS seems likely to provide a significant safety precaution for rescuers.

Drones in the Hands of Everyday People

One remarkable observation from this survey is how many lifesaving drone incidents involve operations by bystanders, volunteers or other non-professionals who happen to be in a position to use the right tool at the right time. One-third of the lives saved in Table 1 were rescued by non-professionals or volunteers. Although drone operations in emergency locations such as disasters should always be coordinated with the incident commander and local authorities, it is clear that even informal use of a drone by non-professional “consumers” has already resulted in a net benefit to public safety, and will continue to do so as the technology becomes more commonly used.

As countries worldwide address the question of how to regulate drone technology, it is crucial that policy not be driven solely by reported, and often sensationalised, safety concerns. The benefits of widely-deployed technology must be weighed as well, and these benefits are already being realized in life-saving applications. Regulations that make it more challenging or burdensome to use drone technology as tools to help save lives represent a net detriment to public safety. This is especially true if those regulations consist of blanket restrictions on operations, as opposed to being focused on addressing specific safety concerns. For example, a more restrictive altitude limitation for drones means that less terrain will be within view of the camera during a search-and-rescue mission. A blanket restriction on night operations will preclude the very effective use of a thermal camera to find missing people and to combat fires during half of the available time.

Strict licensing or testing requirements will suppress the number of people who will choose to learn about the technology and who are then in a position to use it for public safety benefits, including in unexpected emergency situations. Until last year, rescue personnel in the United States who wished to use drones in professional lifesaving operations were required to become FAA-licensed manned aircraft pilots first, an expensive and timeconsuming process that severely limited their use. The FAA’s new Part 107 system offers a much more reasonable path for rescuers, like other professional drone users, to learn the requirements for safe and responsible flight and put their craft to work. Based on our research, rigorous restrictions and impediments to drone use, often proposed in the name of safety, can be expected to cost lives over time.

The clear conclusion is that drones are regularly saving lives around the world. This is occurring even though professional rescue crews are just beginning to adopt UAS technology, and in many cases are relying on bystanders or volunteers to provide lifesaving assistance. Many countries do not yet have a comprehensive regulatory framework for professional drone use that allows drones to routinely be used in emergencies.

DJI is at the forefront in efforts to develop best practices and optimal standards for firefighters, rescue services and other first responders to integrate drones into their command protocols. As these efforts continue, we expect the number of lives saved by drones to continue to grow.

Reprinted with permission from DJI Technology.