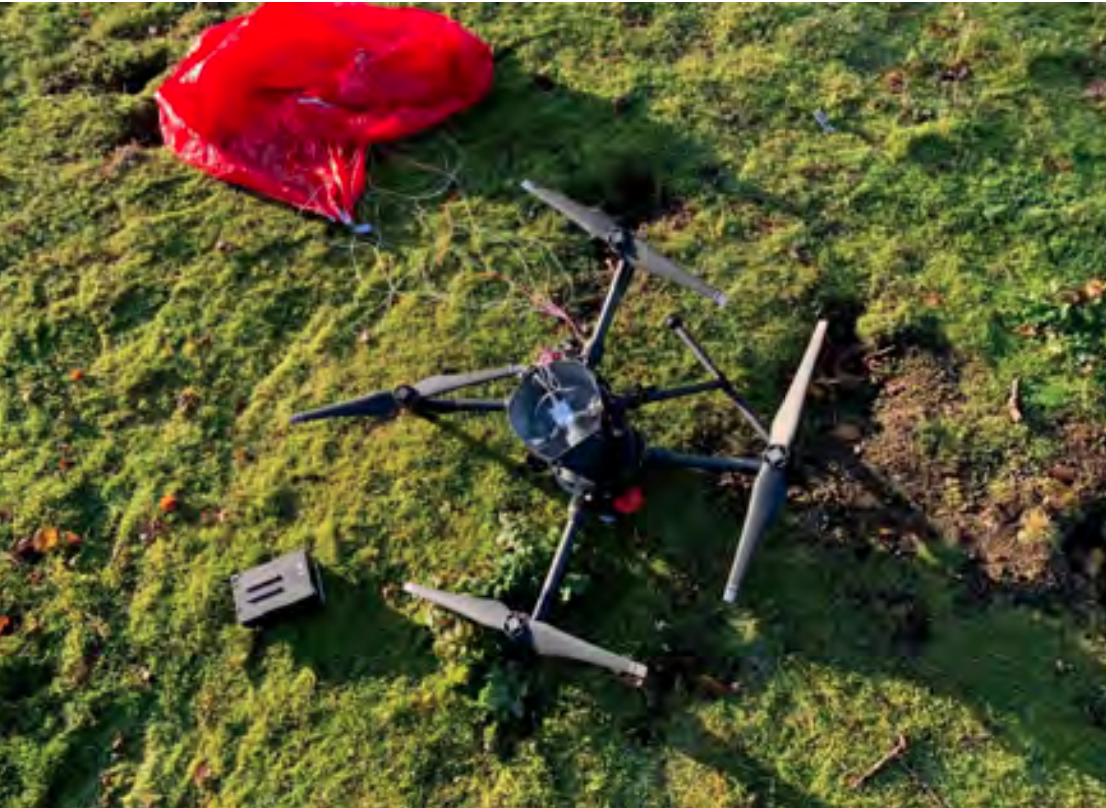 “Unmanned aircraft systems (UAS) occurrences accounted for a quarter of the notifications received by the AAIB in 2021 and the increased levels of reporting from this sector is welcomed. The AAIB has been investigating selected UAS accidents since 2015 and an article on what we have learnt and fed back to the industry is included in this Review.

Unfortunately, some of the hard lessons learnt in the development of manned aviation in the 20th century (such as the need to expect and train for failures) are having to be relearnt by the UAS sector in the 21st century.”

The AAIB elaborates on that statement by saying, “Some are making the same mistakes that were made in the development of manned aviation a few decades ago such as:

Accident investigators in the UK have been frustrated by the lack of cooperation from UAS manufacturers. The report says a safety recommendation was “to a manufacturer to provide prompt technical support to Safety Investigation Authorities.” This is as a result of the UK Safety Recommendation 2021-16: “It is recommended that DJI introduce an effective system for providing timely technical support to State safety investigations.”

This was as a result of frustration they experienced from a 2021 accident. They say “Access to relevant technical information from aircraft manufacturers is often essential to assist investigators in understanding the causes of the accident and identifying areas which would benefit from safety improvement.

The AAIB has experienced varying degrees of support from UAS manufacturers. An absence of information from the UAS manufacturer impeded identification of a definitive cause during the investigation of a ballistic parachute deployment to a DJI Matrice 210, which is reported in AAIB report AAIB-26256, published in AAIB Bulletin 2/2021.”

The UK currently produces safety recommendations from accidents. A lessons learned approach. This is a notice to pilots about issues they should be aware of of safety items that need to be addressed. A significant number of UAS accidents results in such recommendations. 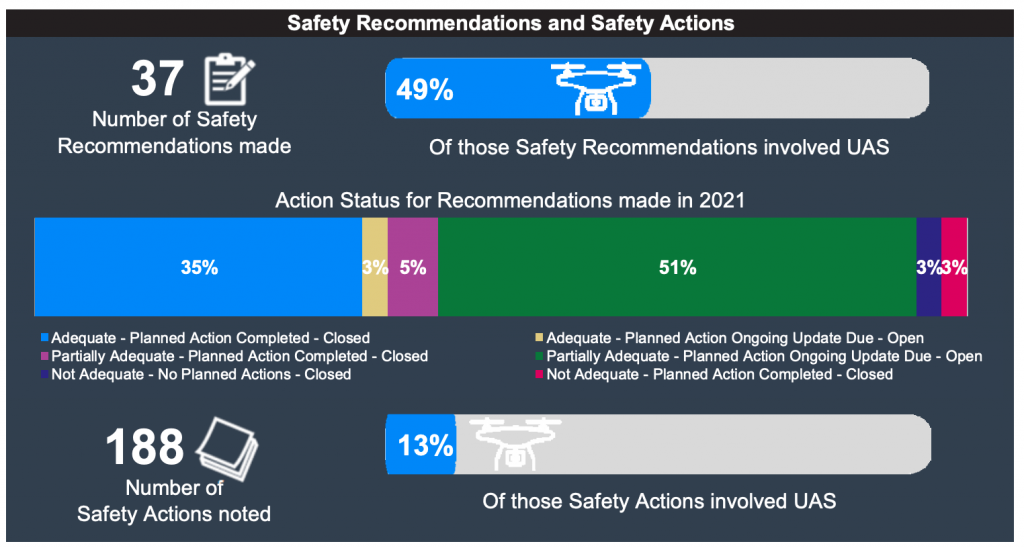 The report says more safety recommendations are due to be released. However, if pilots fail to learn from known defects we are doomed to continue to repeat the same mistakes.

It would be great if we could get similar information from the US but until that day, the UK data is critical to understanding UAS accidents and incidents concerning drones we fly in the US.

The UK data review found that 34% of UAS accidents were the result of “the UAS becoming unresponsive to control inputs or displaying an erratic uncommanded response in flight.” Another 19% of the top five factors were the result of system or component failures.

However, the data shows the vast majority were related to software or hardware failure on the drone beyond the control of the pilot. This is why you must fly accordingly.

Investigators in the UK observed “The frequent reports of UAS loss of control and fly-away events indicates the potential hazard to uninvolved persons. The kinetic energy level of these impacts, even for a typical small UA, is likely to be well above the 80 joules of kinetic energy limit for a UAS operated intentionally over ‘uninvolved people’.” The FAA has taken notice of this issue and as a result passed new regulations to limit operations over people.

It does not matter how talented you think you or your department pilots are when the majority of accidents are the result of issues related to the UAS but beyond your control. 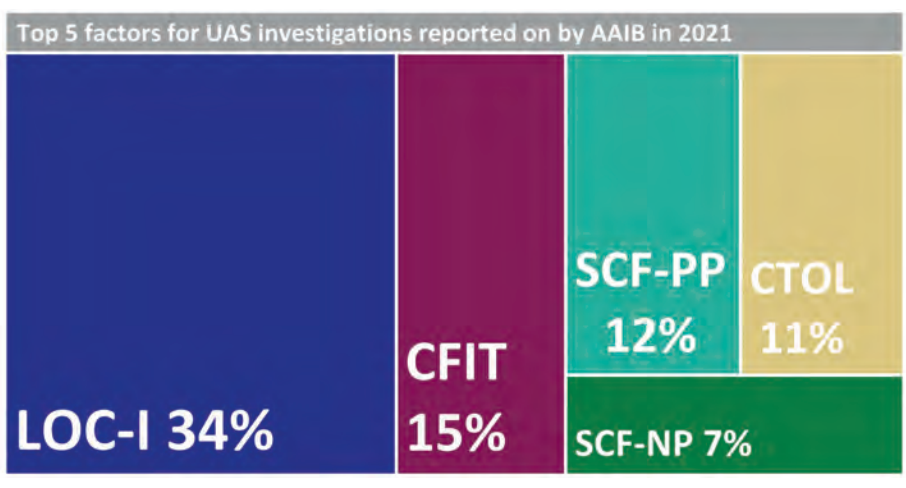 Nobody should be surprised by these accident and incident statistics resulting from aircraft defects. As I’ve said over and over, the UAS manufactured today and not certified airworthy and has no data to support their safety and no review of manufacturing competency.

Rather than push back about that statement, just conduct all flight operations with the assumption the drone can come out of the sky due to factors beyond your control. Yet, you will be held accountable as the Pilot-In-Command.

The UK AAIB report noted that work has yet to be done in the area of “Determining UAS failure rates to facilitate risk assessments of UAS operations” and that is very true.

Without good data and transparency in sharing the results, pilots can’t make informed decisions and will only be able to make risk assessments based on assumptions and prejudice.

The overwhelming number of accidents involve loss of control in flight. 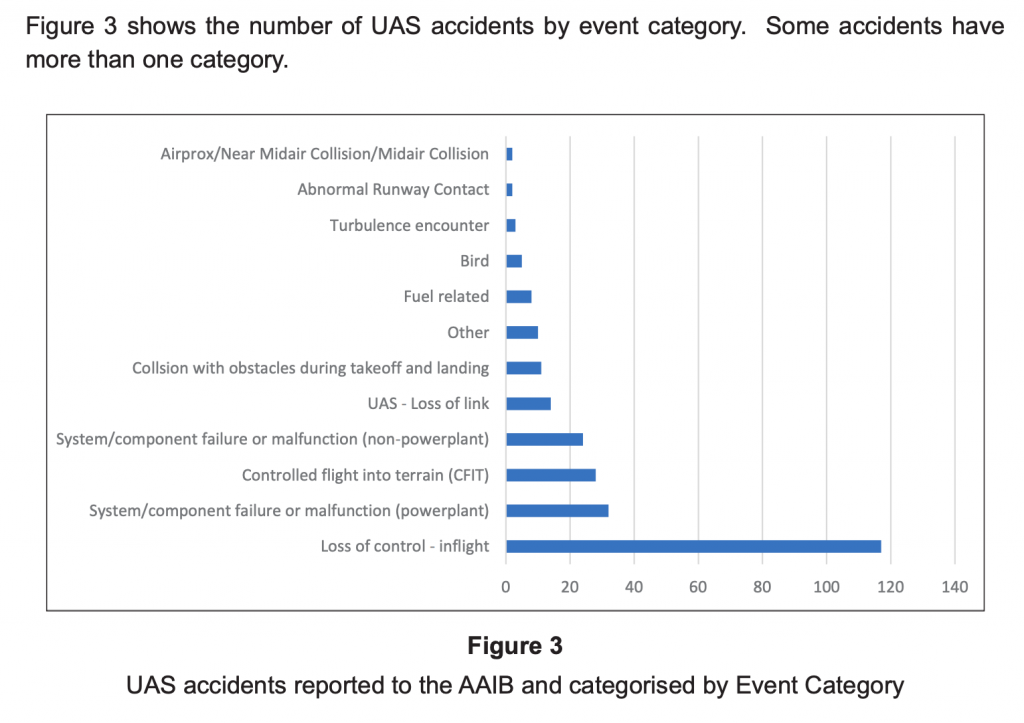 Child Lost Eye Due to Drone

The UK report also shares the tragic accident in 2015 when a child lost an eye from a DJI Inspire.

“The AAIB is only aware of one UAS accident in the UK involving a serious injury which occurred in October 2015 when a quadcopter drone flew into an 18 month old child during a recreational flight. One of the propeller blades cut through the child’s eyeball and the eye could not be saved.”

Another injury flight is reported to have occurred in France. The report says, “The French BEA has reported on an accident involving a DJI Inspire 2 quadcopter UAS which seriously injured three people in the audience of an outdoor concert on 14 July 2019. The UA struck a vertical structure on the side of the stage and then flew into the crowd where people were injured by the propeller blades.”

There have been injury flights in the US that I have reported on previously.

Learning from drone accidents is a work in progress and we have a lot more to learn and teach.