I recently wrote about the decision to no longer fly the DJI matrice drone. You can read that post here.

In public safety UAS flying, we are entering a unique period of a lack of clarity for the first time in the field as drone manufacturers drop development and support for the aircraft we fly.

A great friend put up this poll as a result of my article and the results surprised me. 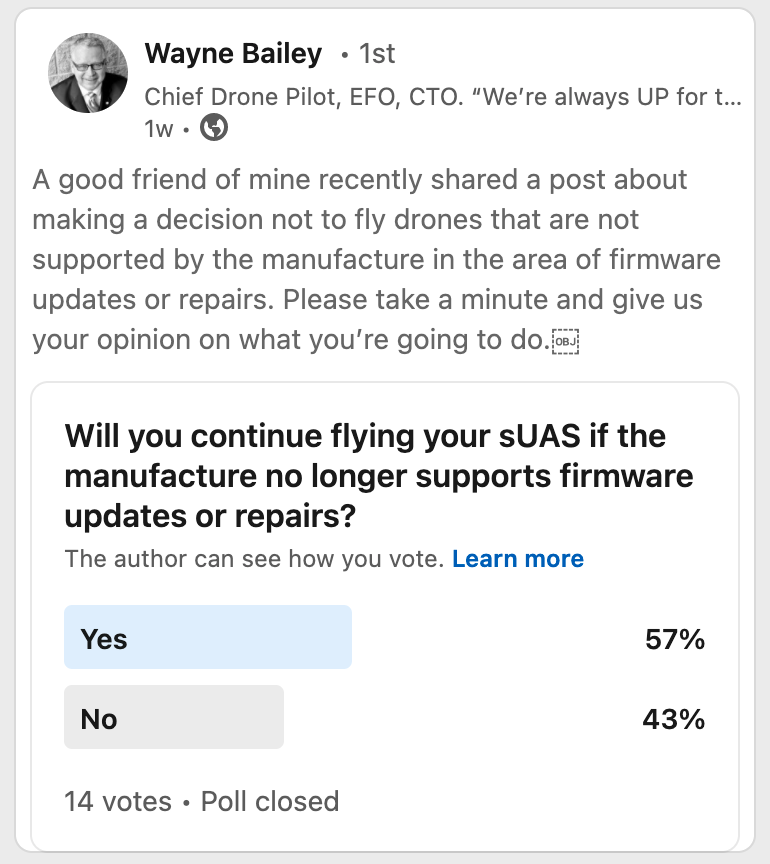 It Lands on Your Back

If you fly under a COA the COA agency and you as the pilot are responsible for all flight operations, incidents, and accidents.

Part 107 pilots have to look at CFR 107.15 to see what is required before flight. This is the part that I can’t wrap my head around to see a way forward.

But There is the Problem

If the manufacturer has closed the door and turned their back on development, firmware support, or updates then how can you possibly know of any material defect that would render the drone unsafe?

In this situation you are not certifying the drone is safe to fly you are either guessing or praying things will go well.

Ignorance is never a defense. “I didn’t know” is not a winning strategy when you should have known.

For the manned aircraft that holds an airworthiness certification, I can turn to the certificated FAA mechanic and confirm the aircraft has complied with all known manufacturer Service Bulletins, Airworthiness Directives, and annual inspections. More frequent inspections are required for aircraft used in commerce.

As a drone pilot, you can’t do that and can’t obtain any sort of assurance once the manufacturer stops responsibility for the drone.

You are probably not going to be thrilled with the answer. It puts all the weight on the pilot that elects to put the UAS in the air.

Here is What I Asked

“How can an agency continue to fly their drone under Part 107.15 when any issues identified to [the manufacturer] after development has ended are not addressed and the language of 107.15 requires the RPIC to attest the drone is in a condition for “safe operation.”

I have never found any waiver from the FAA definition of safe operation for a UAS.

If the regulation is the drone must just be in a condition similar to what the manufacturer said before they discontinued active development and the manufacturer is no longer working on fixing safety issues, development, or support then how can a pilot be in strict compliance with 107.15?

But I’m not sure we can compare apples to apples here because in manned aviation the aircraft is subject to an annual inspection to determine if the aircraft is still in airworthy condition. As the pilot of a manned aircraft, I can ask my certificated FAA mechanic if my aircraft is in compliance with all Service Bulletins, Airworthiness Directives, and appears to be in a condition for continued safe operation.

But there is the crux of the issue, while a UAS pilot is the final authority to say the drone is safe to fly, it seems to me that is the opinion of the pilot and not an accurate statement about the condition of the aircraft. As 107-2A says, “The remote PIC assuming control of the small UAS maintains responsibility for the safe operation of the small UAS.”

Chapter 7 is all about looking the drone over. If the FAA Part 107 regulations came up with an alternative definition of what “safe operation” is just for drones weighing less than 55 pounds then why were those specific words used if not intended to refer to the FAA definition for safe operation.”

Here is the FAA Response and Advice

“The FAA view is stated in the preamble to part 107 and AC 107-2A. Those documents essentially say that under part 107, the remote pilot makes the determination that the UA system is safe to operate and is the final authority (and accountable).”

You can elect to make whatever decision you want based on your willingness to accept the personal risk for any incident or accident. If you feel comfortable defending your decision to fly in the face of no known information then “You do you boo.”

However, if you are flying for any public safety agency or department that might get sucked into the lawsuit against you, I agree with the FAA. You should absolutely make sure the public safety agency attorney and risk management are aware of the issues and will not abandon you when it is discovered you had no way to know the drone was safe to fly.

Keep in mind that an official FAA investigation and examination of all flight operations, records, and flight data records do not require a crash. A deep investigation can begin after a member of the public files a concern about the safety of any flight you make.

So you might as well come up with your defendable answer on how you knew the drone was in a condition of safe operation now.

The Public Safety Flight website is dedicated to news, honest information, tips, and stories about the use of unmanned aircraft systems (UAS), UAVs, aircraft, and drones in the fire service and other public safety niches.The site was founded by Steve Rhode, an FAA-certificated airplane commercial and instrument certificated pilot and a very experienced Part 107 UAS commercial pilot. Steve is the Chief Pilot with the Wake Forest Fire Department and the North Carolina Public Safety Drone Academy. He also provides expert advice to drone pilots through Homeland Security Information Network and he is an FAA Safety Team drone expert. Steve loves to work closely with public safety pilots to answer questions and share information, real-world truth, and drone operation advice. You can contact Steve here, learn more about Steve here, or join his public safety pilot private email list here.
Previous Stop Way Over Paying for Drones Not Proven Safe
Next Parrott Anafi USA Falls Out of Sky Because of Data Error

DJI has announced a new firmware update for the M300. One item caught my eye …