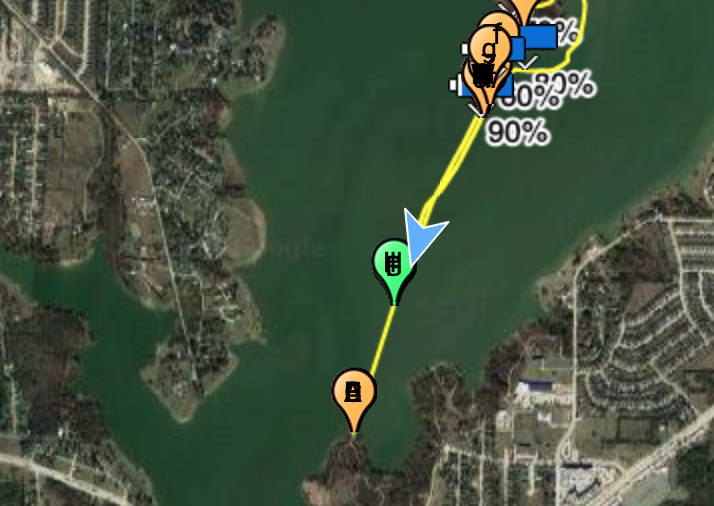 Over on ReportDroneAccident.com, I just received a report on a DJI Mavic 2 Enterprise Advanced crash, and I had a chance to talk to the COA agency point of contact.

The accident raises several issues for all pilots to consider to learn from the situation.

A call came out on a sunny afternoon about people lost on a raft on a lake. The COA pilot launched in winds reported 14 MPH against his back to fly out over the lake. Because of the wind, the drone’s speed was up to 45 MPH outbound from the Landing Zone (LZ).

The pilot launched to find the missing raft on the lake.

The missing people on the raft had a functioning cell phone with them, and they were communicating with dispatch. They wound up on land. So there was no risk to life.

On the way back from the flight, the drone suddenly descended without any input from the pilot and was lost into the lake.

It would be best if you always took off with a strong wind on your face and not your back. This way, the wind will help push you home instead of rapidly depleting your battery as you fight against the wind to make it home. That would be better Aeronautical Decision Making.

In this particular accident, the data shows at 3 minutes and 51 seconds, the pilot switched the controller into Position mode, but it also shows the drone remained in Sport mode. It appears to be a software anomaly.

Another data discrepancy that caught my eye was the inaccuracy of the collision avoidance sonar on the aircraft. The data file shows the aircraft was primarily 38.7 feet away from any obstacle, even when the barometric altitude showed a different value until less than a second before the crash. 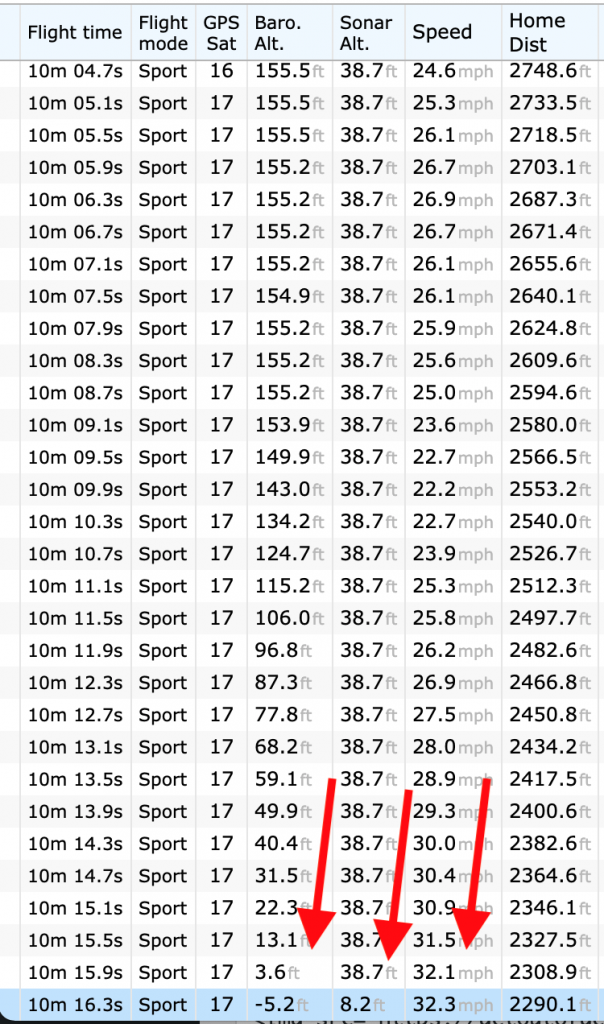 The value to the left is the barometric altitude, the one to the right is the sonar altitude. The sonar altitude does not update until about half a second before the crash.

The values above the water on the outbound leg were better and measured more accurately for four seconds before it maxed out at 38.7 feet. 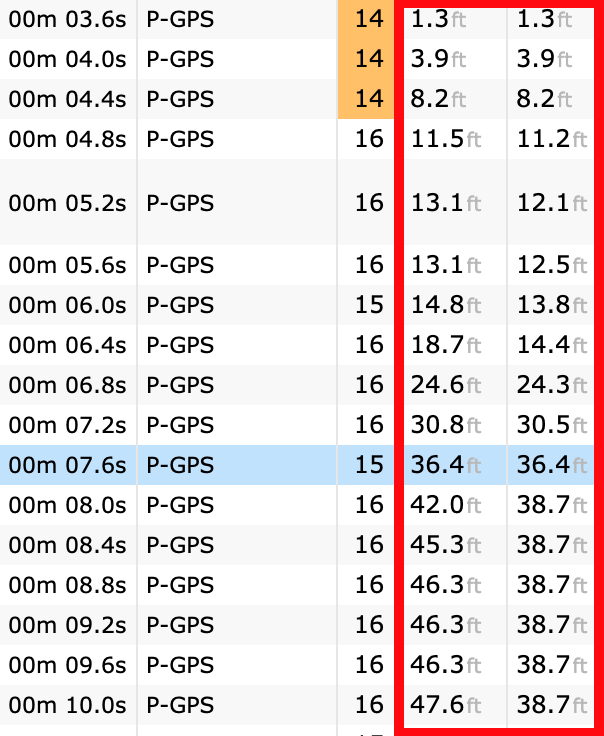 I understand why the pilot decided to fly Beyond Visual Line of Sight (BVLOS) because he felt it was an emergency. However, the maximum flight distance from the pilot was 6,571 feet. That is way beyond the maximum VLOS distance. That becomes important since even at the time of the crash, the drone was 2,290 feet from the PIC. Additionally, no Visual Observer was utilized.

Because the drone was operating BVLOS, the pilot was relying solely on the telemetry on the screen. Besides a high wind warning, there was no other flight-critical warning.

On the way back to the landing zone, the pilot gave the aircraft a full forward stick to bring it back against the wind.

At 10 minutes and 8 seconds, the drone begins to descend.  The data file shows a full down stick. However, the pilot states he was not doing that. The last data entry is eight seconds later. The data shows the drone had 100 percent signal strength, 17 satellites, and 52 percent battery life.

This is Why You Can’t Trust Your Telemetry

Because this was a crash under a COA, the agency is required to report it to the FAA and potentially the NTSB.

Hindsight is always 20/20, and I can fully appreciate the urgency the pilot felt to fly. I really do.  I’ve been there many times myself.

However, given the LZ selected, wind direction, and distance of the flight, the right call would have been not to fly the UAS and instead rely on a different way to solve the problem.

The more logical solution would have been to use binoculars from the shore since the distance from the shore to the middle of the lake was a few hundred feet at best from each side.

Flying should be the last resort after everything else had been tried.

You can’t trust the software alone to keep you safe. The agency sent in the data file to DJI, and they denied any responsibility for the crash. Without the pilot or VO able to visualize the aircraft, that will probably be the final word.

If this flight ended by striking someone rather than crashing into the lake, the pilot, COA agency, and responsible government entity would be ripe for a big lawsuit since there is so much out of compliance here.

I’m not faulting the pilot because I firmly believe there is no sense in wasting a perfectly good disaster if we can all learn from it. Now, if he does it again, that’s a different issue.