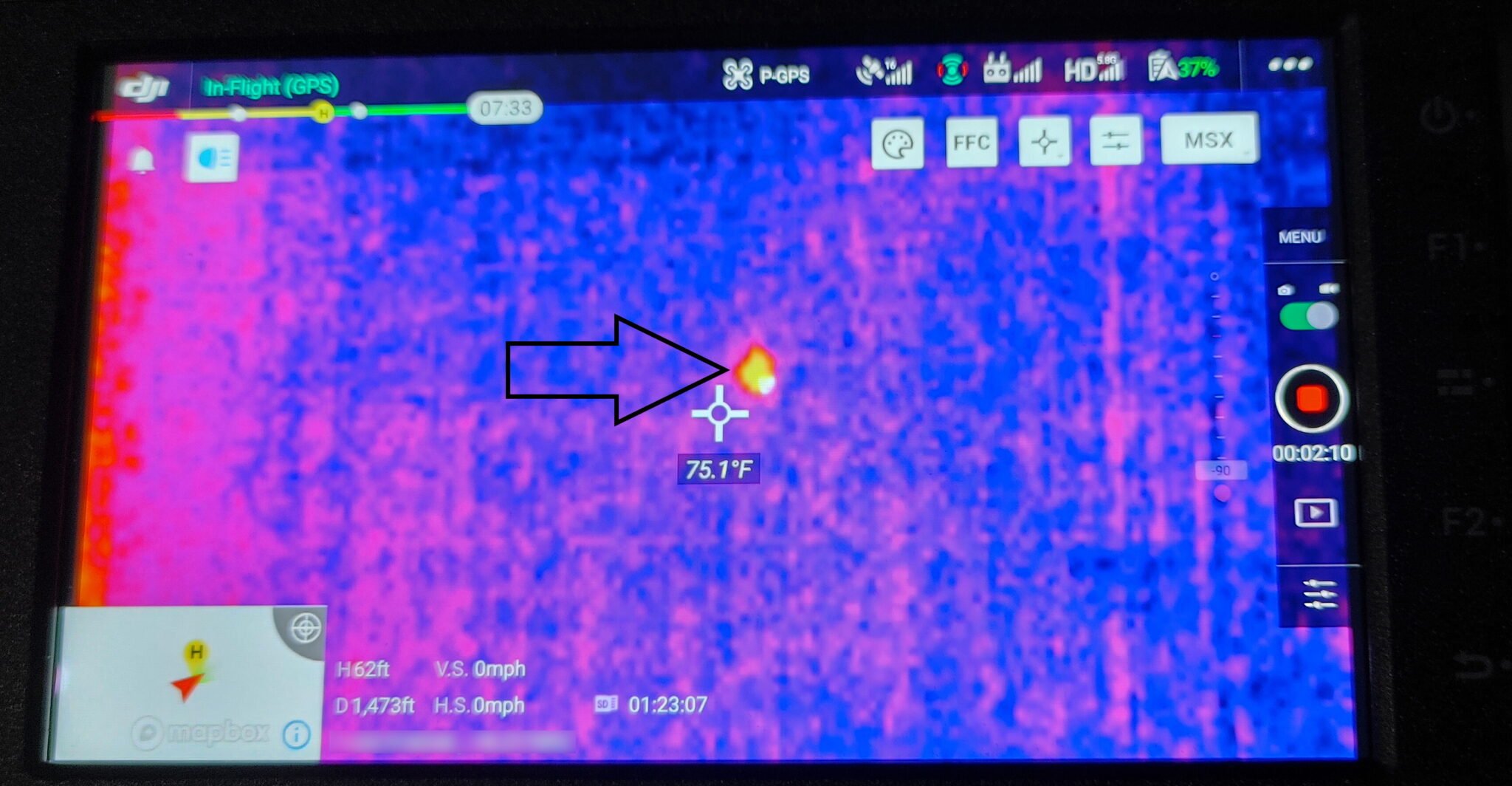 This post was submitted by the great people at Oak Island Water Rescue.

We were dispatched, along with Oak Island Fire Department, to locate and assist a kayaker that had gone missing near Sheep Island. He had been boating with a friend who lost contact with him and called 911 when he could not find him after several minutes of searching. The initial report stated he was near the west end of the island, across from Kings Lynn Drive. We launched boat 4490 from Blue Water Point Marina and headed west to locate the victim.

This rescue would prove to be both difficult and time-consuming. Being close to midnight and low tide, visibility was poor and there was a thin marine layer of fog. This actually helped a bit, since it was possible to see the light from our searchlights, which could now be used to “point the way”. We had 2 command stations set up: Our Chief and Oak Island Fire Department were positioned further west along Kings Lynn Drive, while the boat-launch team stayed at Blue Water Point Marina. The fire department had searchlights shining on Sheep Island where they believed the victim to be located, and our boat used those lights to navigate to that position.

However, the victim was on the move, walking through the water and oyster beds. To protect his feet, he used some of his clothing for shoes, but lost those in the mud and muck, resulting in injuries to his feet. While the boat was searching near the west end of Sheep Island, one of our members at Blue Water Point noticed a light from a cell phone on the far east end. We strained to determine if the light was actually where it appeared to be or was more distant, a common optical illusion at night. Then it started waving, side to side, clearly trying to get our attention. We directed our searchlights to this location and launched the drone to determine if this was actually the victim.

The drone has an infrared camera, a crucial technology for searches at night. Flying the drone over the location where we last saw the light, it was clear to us that this was indeed the person we were looking for. 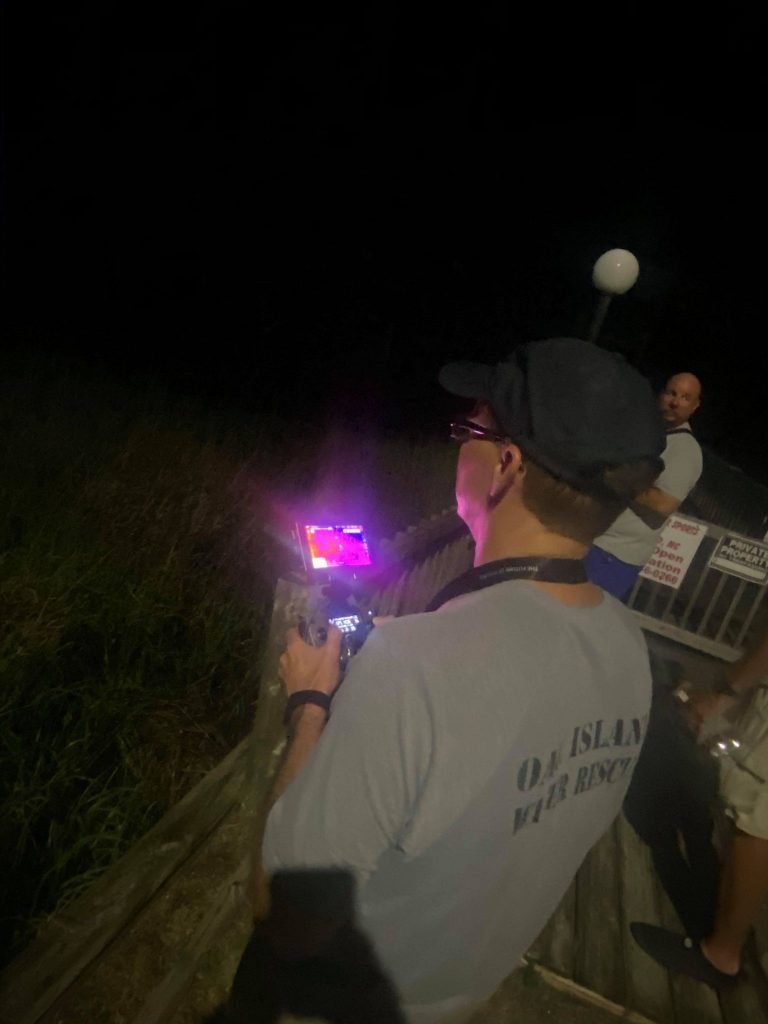 Even after locating the victim, and directing boat 4490 to the precise location, it took several minutes to rescue the man due to the water only being one foot deep. The crew had to very carefully move the boat into place and then assist the victim in getting into the boat. They then returned to Blue Water Point where we turned the patient over to paramedics with Oak Island Fire Department. He was treated on scene for minor cuts and abrasions and given a thermal blanket to keep warm until his friends showed up to take him home. 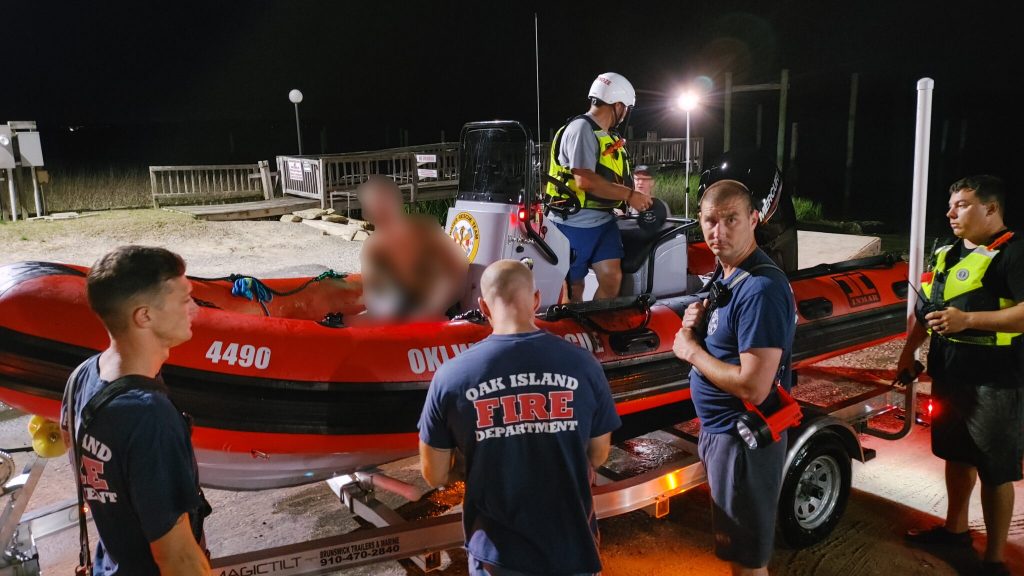