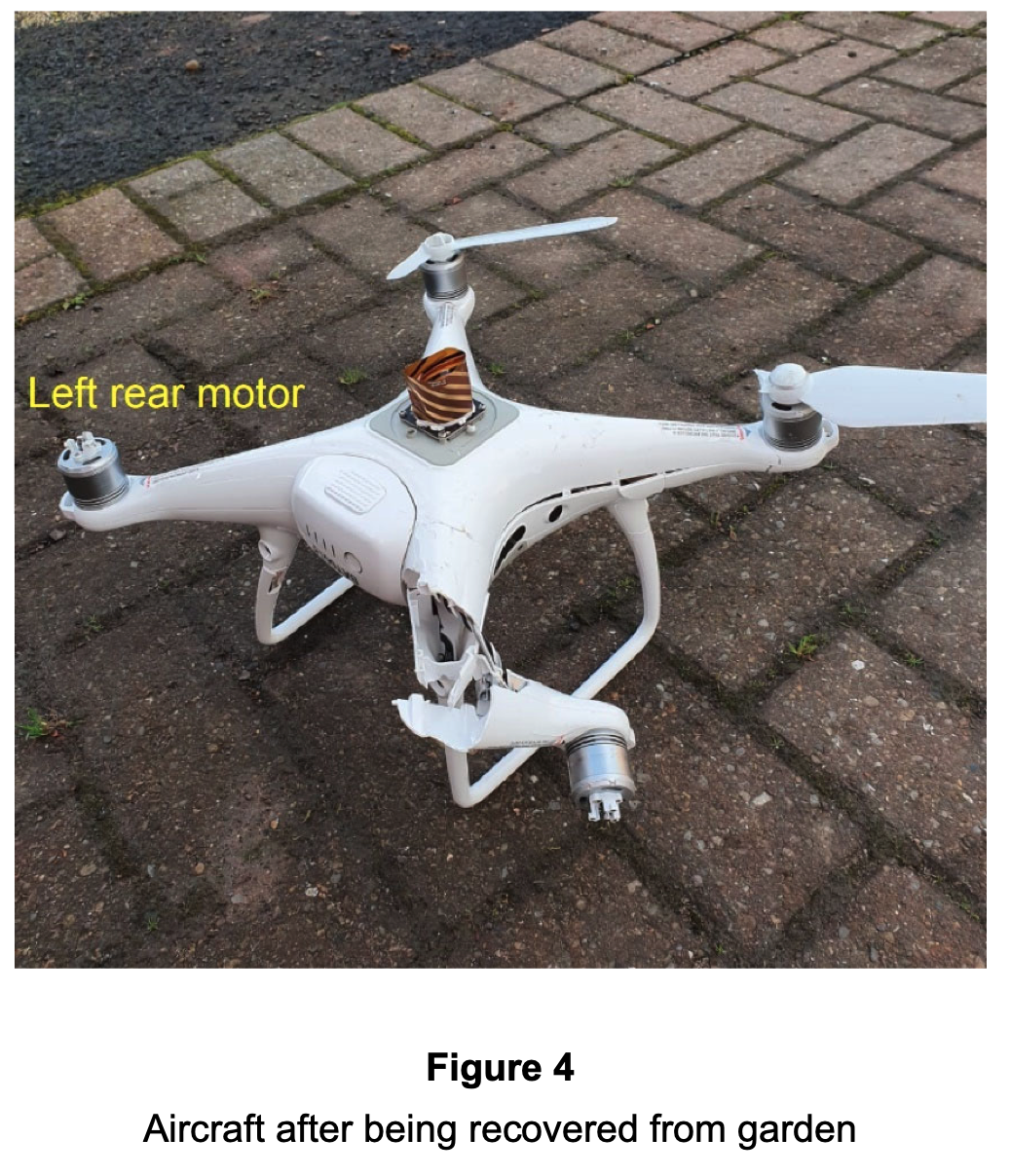 A December 2, 2020 accident in the UK neatly ties up many of the concerns I’ve been writing about over the past couple of years. I wish the US had a similar detailed accident examination process but the UK leads in this effort with the Air Accidents Investigation Branch.

A DJI Phantom 4 RTK was being operated by a pilot with 98 hours in type.

History of the flight

The UAS, a DJI Phantom 4 RTK, was being operated commercially to capture survey data of a railway track and adjacent infrastructure near to Newtongrange railway station. This was part of an extensive survey of approximately 45 km of railway track between the towns of Newcraighall, located to the north of Newtongrange, and Tweedbank to the south. This work was to be completed in separate phases, with the first phase taking place between Newcraighall and Newtongrange. The survey work was being conducted on behalf of Network Rail.

On the day of the accident, the aircraft was being flown from two different takeoff and landing sites (TOLS). There was no precipitation and the visibility was 10 km with the wind from a south-westerly direction at about 11 kt. The aircraft was flown using its automated flight mode3 whilst remaining within visual line of sight (VLOS) of the pilot and at a horizontal range of less than 500 m. The pilot was also accompanied by an observer. Having successfully completed two flights, the UAS was shut down and the aircraft, with its propellers removed, was placed into its transport case. The pilot and observer then drove to the next TOLS, which was located in the carpark of Newtongrange railway station.

The propellers were refitted to the aircraft and a flight lasting about 20 minutes was successfully completed. The battery was then replaced with a fully charged unit before the aircraft took off at 1149 hrs for the next flight (Figure 1). This included overflying the railway track, adjacent industrial buildings, and a housing estate at a height of about 55m (180 ft) AGL before landing back at the TOLS at 1200 hrs. 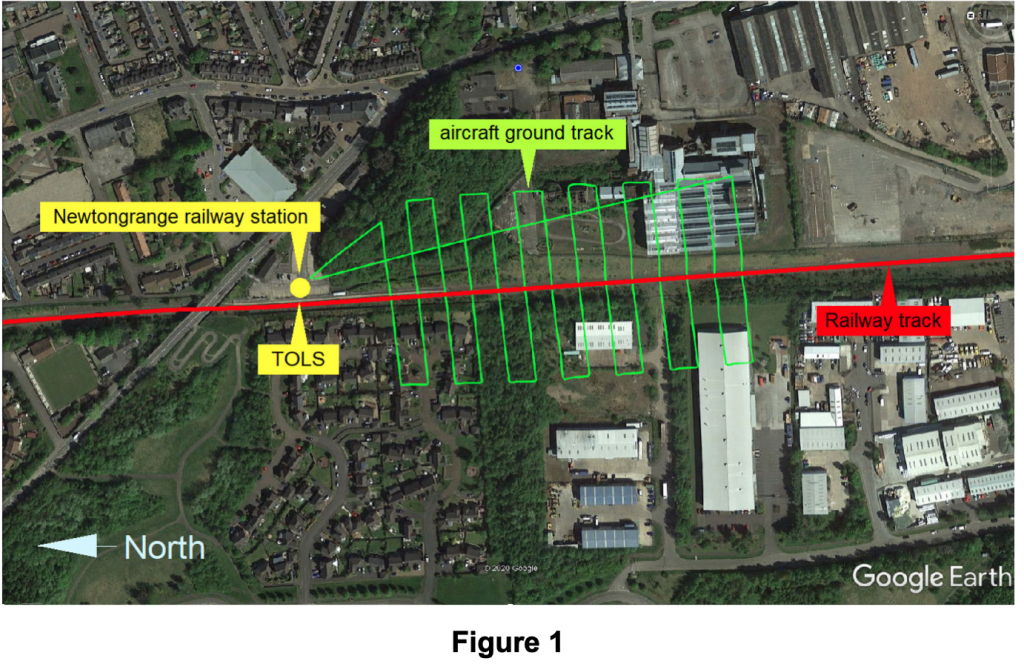 The pilot, having checked that the aircraft battery had sufficient charge, then programmed the next flight route. This was for the aircraft to fly at a height of about 70 m (230 ft) AGL, whilst remaining approximately overhead the railway track. The route would take the aircraft initially to the south of the TOLS, and then to the north before returning to land.

The aircraft took off at 1206 hrs (Figure 2) and followed the programmed route, whilst the pilot and observer monitored its progress. At 1209 hrs, the aircraft reached its northerly turning point, where it slowed and commenced its turn back towards the TOLS. This coincided with the aircraft’s camera capturing a survey photograph of the railway track and houses below (Figure 3). Shortly after this, the pilot reported that the UAS controller emitted a short “beep”. Whilst the observer continued to watch the aircraft, the pilot checked the controller, but no error messages were displayed. The aircraft then rapidly descended vertically. As the aircraft neared the ground, the pilot and observer lost sight of it and, shortly after, a series of error messages were displayed on the controller.

The observer stated that, as the aircraft had descended, it appeared as though the “aircraft’s motors had stopped and that it was on its back in free fall”.
The pilot and observer subsequently found the aircraft in the rear garden of a terrace house (Figure 3) about 20 m from the railway track and below where the loss of control had occurred. The house was part of a large, densely populated housing estate and there were no people in the garden when the accident occurred. However, when the overhead image (Figure 3) was taken, a member of the public was 10 m from where the aircraft subsequently struck the ground.

The aircraft’s motors, propellers, arms, landing gear, camera and fuselage were damaged (Figure 4). Inspection of the aircraft’s battery shortly after the aircraft was found, showed that it had about 50 % charge remaining. The left rear propeller had detached and was not found. 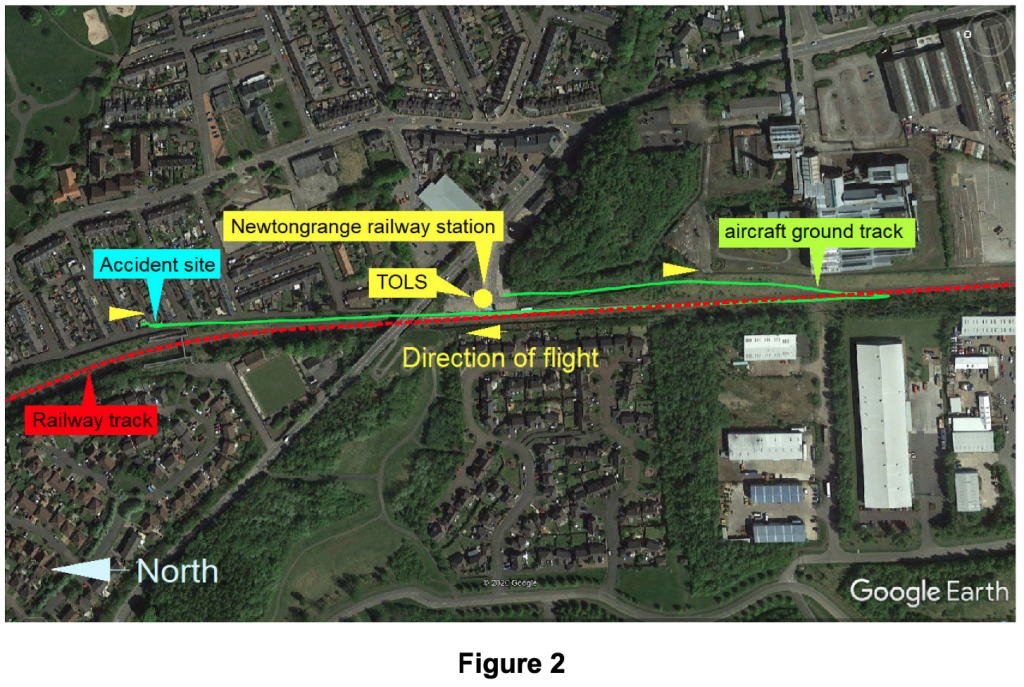 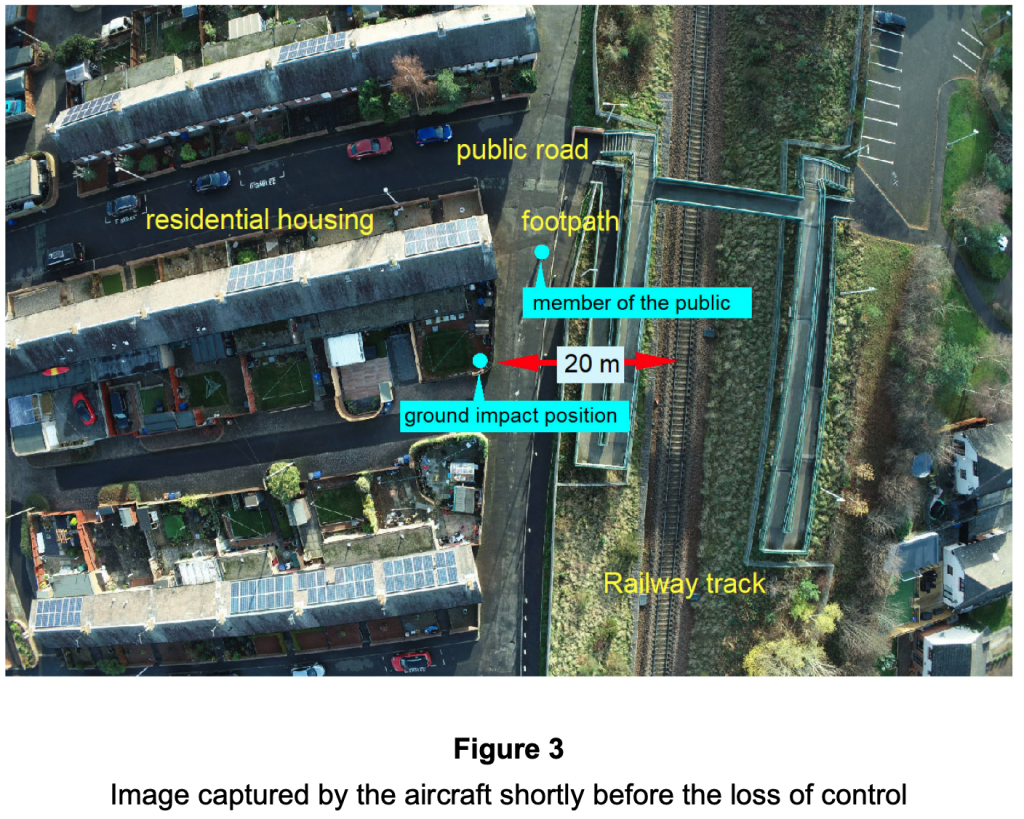 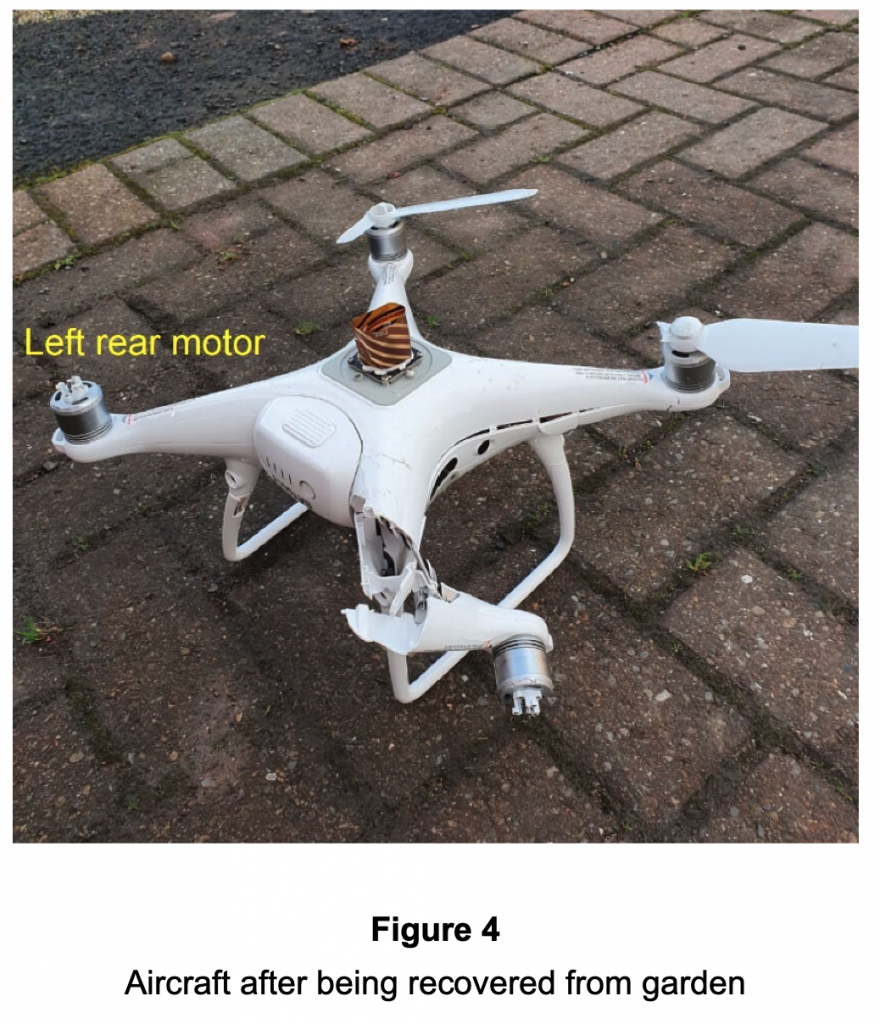 Similar to new regulations in the US, the UK and EU are restricting flight operations for all drones that have not achieved an airworthiness certification. Flight over people is one of those categories. The report states, “operations that present an equivalent risk to that of manned aviation and will be subject to the same regulatory regime (ie certification of the aircraft, certification of the operator, licensing of the pilot).”

The operator, Network Rail noted a concern with the reliance on parachute systems. The report states, “Network Rail had previously considered the use of parachute technology to limit the energy of a falling UAS. However, concerns were raised about inadvertent operation and possible entanglement in the overhead line electrification system, which would create alternate risks.” Parachute systems have failed and brought drones down.

Analysis of the recorded flight log indicated that the left rear propeller had detached from the aircraft in flight. This resulted in a loss of control, with the aircraft descending rapidly and vertically to the ground.

After the propellers were fitted and before the accident flight, the aircraft had successfully completed two flights and flown for more than 30 minutes. This indicates that the propeller had probably been fitted correctly prior to flight and therefore either the propeller or its locking mechanism to the motor may have failed. The manufacturer did not confirm if it had carried out a detailed inspection of the aircraft and therefore it was not possible to determine the cause of the in-flight separation. However, the manufacturer stated that it had ‘currently not seen any recurring pattern of similar cases’.

In 2020, the AAIB was notified of nine accidents involving DJI Phantom 4s of which one was an accident on 1 December 2020 where the pilot of a RTK model attributed the accident to a possible propeller failure or in-flight loss of a propeller.
Notification of accidents to the AAIB

The AAIB was notified nine days after the accident occurred, by which time the operator had already sent the damaged aircraft to the manufacturer. It is important that the AAIB is notified of accidents and serious incidents in a timely manner, and within the time frames required by a PfCO or operational authorisation issued by the CAA which, for this operator, was 72 hours. This is so that the appropriate evidence can be secured and that aspects such as the subsequent inspection of a UAS can be coordinated by the AAIB.

The UK AAIB is now calling for the collection of information of failure rates for drones. We can’t rely on the manufacturers to gather and share this information. “Whilst it is recognised that UAS manufacturers would be understandably reluctant to publish such information, large operators such as Network Rail are collating aircraft usage data, and UK operators are also now required to record usage data for each aircraft in addition to individual pilot flight hours to support annual applications to the CAA for the renewal of an operational authorisation. Collation and dissemination of such data would enable, in particular for operations involving overflight of people, the actual risk to uninvolved persons on the ground to be assessed with greater accuracy.”

A recommendation from the report is “that, until an analysis of failure rates per flying hour has demonstrated an acceptable level of safety, the Civil Aviation Authority should consider prohibiting the overflight of uninvolved persons for those unmanned aircraft operating in the Specific category which rely solely upon their propulsion system for lift that would, following a failure of the propulsion system, impact the ground with a kinetic energy exceeding 80 Joules.”