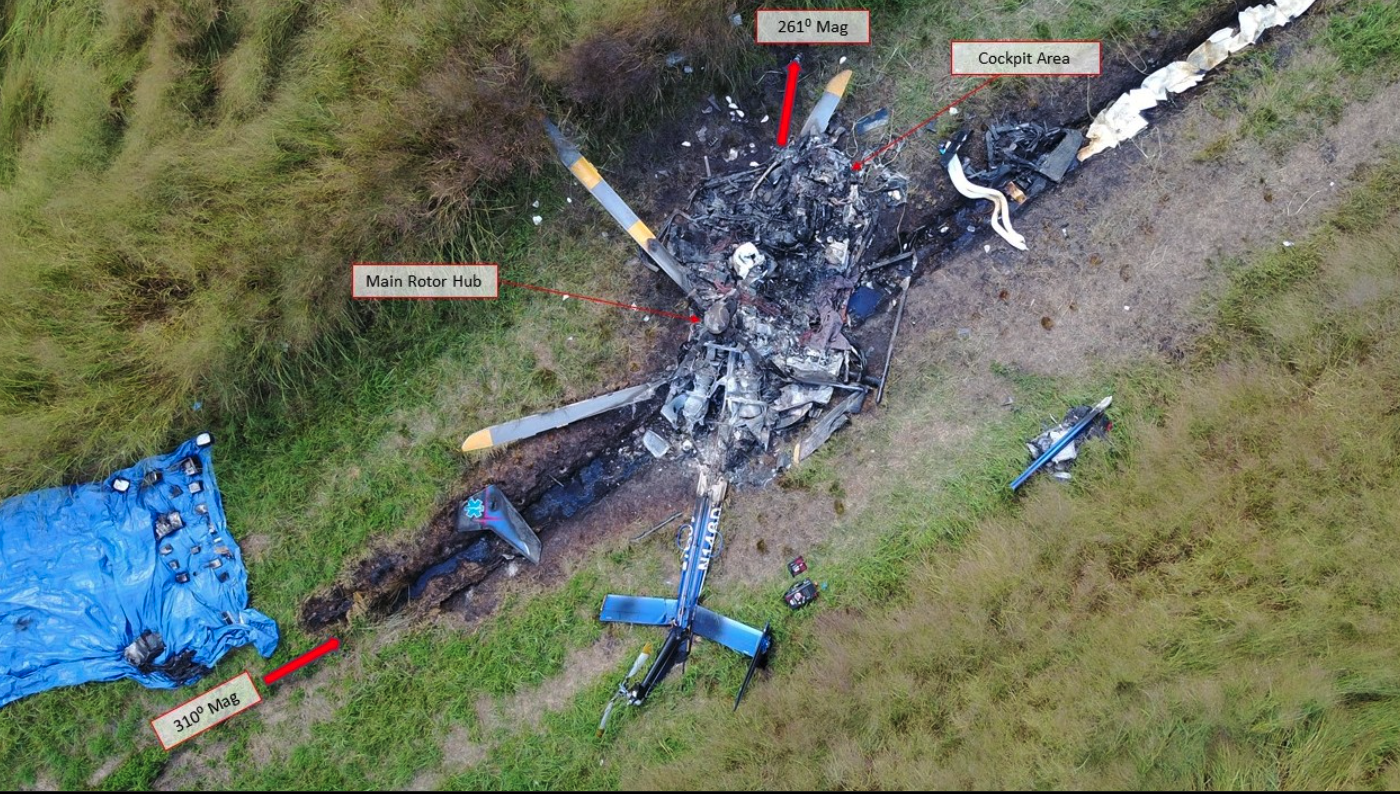 In September 2017 a Duke Life Flight helicopter crashed and the final report is out.

It is a good example of why we can never take flight for granted. This pilot was professional, experienced, and made one critical mistake in the heat of the moment that caused everyone to die.

Let’s see what we can learn from this incident. As you read through the data it is important to remember this was a highly skilled and trained commercial pilot.

On September 8, 2017, about 1120 EDT, a Eurocopter Deutschland GMBH MBB-BK 117 C-2 helicopter, N146DU, was destroyed when it crashed in a field adjacent to a wind turbine farm in Hertford, North Carolina. The commercial pilot, two flight nurses, and one patient were fatally injured. Day visual meteorological conditions (VMC) prevailed at the time, and a company flight plan was filed for a flight that departed the Sentara Albemarle Regional Medical Center Heliport (NC98), Elizabeth City, North Carolina, about 1108. The flight was destined for the Duke University North Heliport (NC92), Durham, North Carolina.

On the day of the accident, the pilot arrived at JNX at 0735. The request to transport the patient by air was received by the DLF communications center at 0800. Preliminary coordination took place after the initial request and a flight request was transmitted at 0815. The pilot accepted the mission at 0817. The flight was classified as low risk in accordance with the AMC risk assessment program.

The pilot, age 51, held a FAA commercial rotorcraft pilot certificate with an instrument rotorcraft rating. His most recent FAA second-class medical certificate was issued on October 6, 2016, which contained no limitations. The pilot’s official title at AMC was captain. Total Pilot-In-Command – 2,100+ hours

In an interview with the wife of the pilot by the NTSB IIC on September 14, 2017, she reported that her and her husband lived together in Clayton, North Carolina, which was an approximate 11-minute commute to JNX for him. She reported that for the three days before the date of the accident, the pilot had no issues with his sleep or diet. The pilot’s work schedule consisted of six days at work followed by six days off from work. She concluded that he was healthy and had no health problems.

The wife reported that the pilot was not on any medications. She further reported that he was happy with his life, he did not have any stressors, and he enjoyed his job at AMC. The pilot did not have employment outside of AMC. She concluded that he never mentioned any concerns to her about the helicopters he flew at AMC or with AMC.

On September 8, the day of the accident, his duty day started at 0735. The accident flight was the first flight of the day for the pilot.

During postaccident interviews with various members from AMC and DLF, all individuals interviewed provided positive feedback about the pilot’s performance from a crew resource management aspect.

The Director of Operations who performed training and evaluations on the pilot, described the pilot as “well organized, “well prepared,” and “always exhibited good pilot skills.”

An AMC pilot at JNX, who had interacted with the pilot on a regular basis, described the pilot as “one of our safest pilots,” explaining that he was “very much a case of I’m not going to fly until I’ve got all the I’s dotted and the T’s crossed.”

A DLF flight nurse and clinical team lead at JNX, who had flown with the pilot on various missions, described the pilot as “very friendly,” “team oriented,” “safety oriented,” and “very thorough.”

A DLF flight nurse at JNX, who had flown with the pilot on various missions, described the pilot as “thorough,” “friendly,” and “interacted very well with the medical crew.”

An AMC mechanic at JNX, who had flown with the pilot on various maintenance test flights, described the pilot as “very professional” and as “one of the best” pilots that he had flown with in his aviation career. – Source

The pilot was conducting an air ambulance flight to transport a patient to another hospital located about 130 nautical miles away. About 8 minutes after takeoff, at a GPS altitude of about 2,500 ft mean sea level (msl) and a groundspeed of about 120 knots, the helicopter began a left turn toward the south.

Although the precise timing and order of events could not be determined, the No. 2 engine experienced a bearing seizure; the engine continued to run. This likely resulted in several cockpit indications described below.

It is likely that the pilot then errantly shutdown the No. 1 engine and continued to fly for a brief period utilizing the No. 2 engine. About 1 minute after the left turn began, the last data point was recorded, which indicated that the helicopter was at a GPS altitude of about 1,200 ft msl and a groundspeed of 75 knots.

It is likely that the No. 2 engine subsequently lost all power. The helicopter then impacted a shallow turf drainage pathway between fields of tall grass on a farm, and a postcrash fire ensued, which consumed most of the helicopter structure.

The lack of any ground scars leading toward or away from the main wreckage indicated that the helicopter was in a near-vertical descent before impacting the ground. One rotor blade was found intact resting in undisturbed 8-ft-tall grass, consistent with little or no rotation of the main rotor system.

Neither engine exhibited damage consistent with rotation at the time of impact. – Source

We Always Need to Plan for the Worst

It only takes a moment for a drone to fall out of the sky as this helicopter did. Always train for the worst.